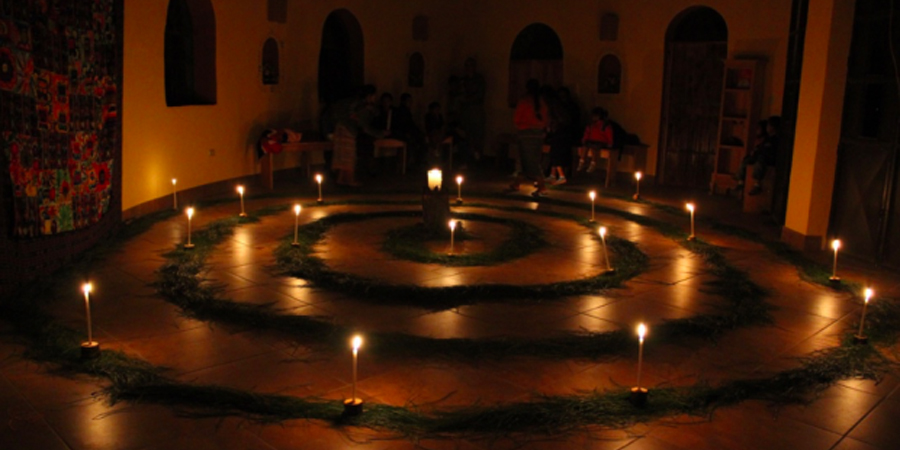 Join us for the closing event of our 2018 season as we celebrate the arrival of winter with an interactive musical procession of candles, humans and myths. Come with the whole family to take some quiet time out of the modern world, into the candlelit past.

Winter Spiral will be a large-scale installation and multidisciplinary performance featuring music, movement, sculpture and ritual.

Set in the dramatic Main Hall of Basilica Hudson, the performance begins as a robed performer representing Winter leads the audience in a procession from Main Hall to North Hall, escorted by the three female accomplices of Hecate, Greek goddess of magic, each bearing a large candle. In the North Hall, Winter and the women of Hecate meet at the center of three spirals built from moss and evergreen boughs. Winter sings a somber song as the three women of Hecate each proceed to the center of their spirals and set their candle on the spiral’s central log. The three women then spiral out and become the guides for the Winter Spiral ceremony.

The Winter Spiral ceremony is rooted in ancient European traditions. Set within the context of the 21st Century United States, Basilica Hudson hopes to reframe and recreate the ritual as a celebration of our natural environment and ritual’s ability to unify disparate communities under one mission: to cherish and celebrate life and peace on Earth.

Hot cider, tea and apple cider donuts will be available. The event is FREE and is open to all.

Produced in partnership with Harpooned Productions, an artistic production company led by installation and performance artist J. Patrick Doyle, the two performances are  multidisciplinary installations that engage ancient folk traditions and rituals not usually shown in a contemporary art context. Both offer great opportunities to engage in folklore rooted in agricultural history, Celtic and German folk traditions and Greek and Roman myths.