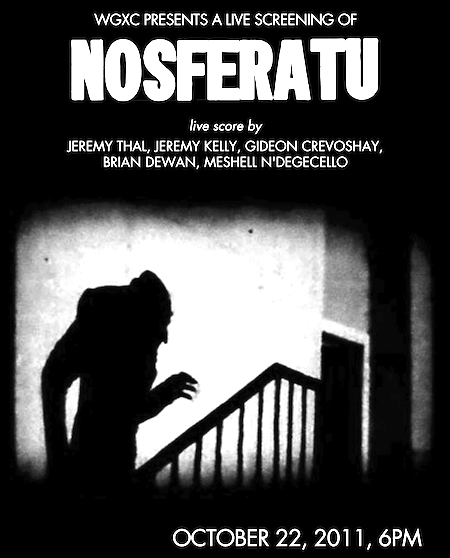 Although Basilica Hudson officially closed its doors for the season this past weekend…it seems our transgressive transmitters at WGXC have planned a coup on the Basilica SATURDAY OCTOBER 22nd 2011 with an especially hair-raising screening of NOSFERATU, A SYMPHONY OF HORROR.  This chilling and eerie adaption of Stoker’s Dracula directed by F.W. Murnau is a silent masterpiece of terror which to this day is the most striking and frightening portrayal of the legend.  Screening accompanied by a live symphony of horror including local musicians Jeremy Thal, Jeremy Kelly, Gideon Crevoshay, Brian Dewan and Meshell N’Degeocello.  Blood-curdling and spine chilling guaranteed [DRESS WARM!].  $10 + suggested admission – All proceeds benefit WGXC – Doors at 6 PM.

WGXC: HANDS-ON RADIO is the new community radio station for Greene and Columbia counties, NY. WGXC transmits 3,300 watts at 78,000 potential listeners in the two counties, and southern Albany County, on 90.7-FM. WGXC is a community-run media project, re-envisioning radio as an innovative platform for local participation with special exhibitions and events, media training for our community’s youth and adults, a news blog, and a local calendar of events. Tune in or turn out with WGXC.