Tree Planting at The Basilica

Join us this Saturday October 12th at 4pm! 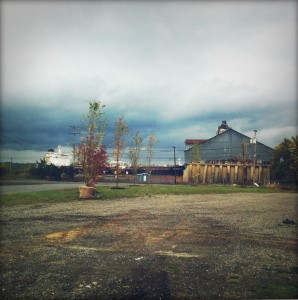 TEN NEW TREES AT THE BASILICA!

Just in time for the end of the Autumn planting season, Basilica Hudson has announced their first Tree Planting Ceremony.  This Saturday, October 12th at 4pm, the Basilica’s long-term plan to bring more green to South Front Street will begin.

Co-director Melissa Auf der Maur says, “Thanks to our community supported Film & Trees fundraiser this past summer, and the generous help and guidance of landscape designer Wenonah Webster and Pond Side Nursery, we have broken ground for TEN big trees!”   Nine twenty-five-foot tall Maples and one honorary Flowering Dogwood will be added to the landscape.  The public is invited to lend a hand in planting the final tree as a celebratory end to the season’s first green campaign.  “We’ll provide shovels and dirt,” Auf der Maur added with a smile.

Already the site of an extensive solar panel array, this latest initiative, supported in part by CCCA/Columbia County Council of the Arts, will add another green element to Basilica Hudson on South Front Street. ”We want to make sure and thank our neighbor, Christabel Gough,” Auf der Maur concludes. “She was the inspiration for our “Plant a Tree” initiative and the first to step forward and buy the Basilica a tree.”