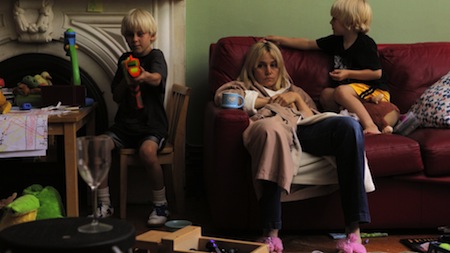 Basilica Creative Director Melissa Auf der Maur photographed Towheads star and director Shannon Plumb at the Chelsea Hotel in 2000, for a Paper Magazine feature on Plumb’s silent film series. Plumb made a lasting impression on Auf der Maur, who attended the April 2013 New Directors Film Festival Premiere of Towheads at the MOMA. The two reconnected and an invitation to screen the film at the Basilica followed….

Someone that night said it best, “… Charlie Chaplin meets Woman Under the Influence by Cassavettes”.

Towheads is a modern-day tale of motherhood as told through the eyes of a Brooklyn mom with two towheaded blond boys. The film explores what it means to be a mother in current times, caught between her responsibility to her children (magnified by an oft-absent husband) and her need to fulfill her artistic aspirations. The story playfully probes the age-old gender roles ascribed to women and mothers and depicts the modern family unit in all its function and dysfunction. At once lighthearted, incisive and critically challenging, it portrays the mundanity of everyday life by drawing on slapstick humor and silent film’s pantomimic tradition while at the same time handling the issues at home with appropriate severity. -Shannon Plumb (Director + Star)