Never did we dream that such a charismatic rule breaker as Alex Cox would appear at Basilica the same month as the “Pope of Trash” pioneer John Waters, to take our film programming to the next level! The Basilica film dream team was joined throughout our season by artists far, near, and in our own backyard: feminist icon Barbara Hammer, acute documentarian Salomé Lamas and acclaimed film and television director Michael Lindsay-Hogg. Forging connections between film, music and art, Basilica SoundScape included projections by Zia Anger, Maxwell Paparella, Nathan Corbin and Stephen G. Rhodes as part of the Kiln Films series. We also hosted a late night screening of Dead Poets Society in honor of the late Robin Williams, with an introduction by our friends from down the river, Neil Gaiman and Amanda Palmer, and co-presented by Secret Cinema, an organization which presents large-scale cultural experiences in abandoned spaces.

END_OF_DOCUMENT_TOKEN_TO_BE_REPLACED 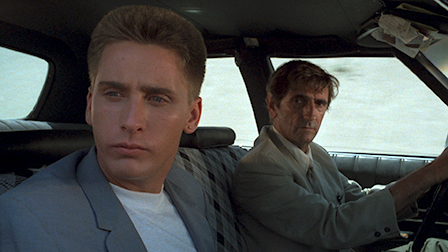 BasilicaScope, in its second year, runs Sept 19 & 20, 2014, and dedicates its entire run to Alex Cox with his cult classics Repo Man, Straight to Hell Returns, and Walker. A visionary filmmaker who made the 1980s all the more bearable for us, Cox masterfully used pinpoint satire and a rambunctious stable of actors to illuminate the sleazy politics of the era. Cox will be live in Hudson for the Festival.

Tickets can be purchased through Brown Paper Tickets online and are $10 a screening or $25 for all three with popcorn.


“Alex Cox’s Straight to Hell Returns is a slightly tweaked re-release of his 1987 cult-classic, punk rock, Spaghetti Western comedy, Straight to Hell. Cox, never a director to shy away from a challenge, co-wrote the script with Dick Rude, who also steps into the role of Willy, one of a trio of ne’er-do-wells that also include Simms (played by Joe Strummer) and Norwood, whose shoes are filled by Sy Richardson, a tremendously underappreciated actor who should be getting a cut of royalty checks from Samuel L. Jackson, whose cool, no-nonsense routine is very reminiscent of Richardson’s style, especially in this film. Also along for the ride is Courtney Love as Norwood’s pregnant girlfriend, Velma. Following an unseen bank robbery, our heroes quickly find themselves seeking refuge from the their criminal boss, Mr. Dade (Jim Jarmusch) in a dirty town straight out of any cheaply made Spaghetti Western of the 60s or 70s.”  – DVD Talk

A hallucinatory biopic that breaks all cinematic conventions, Walker tells the story of nineteenth-century American adventurer William Walker (Ed Harris), who abandoned a series of careers in law, politics, journalism, and medicine to become a soldier of fortune, and for several years dictator of Nicaragua. Made with mad abandon and political acuity—and the support of the Sandinista army and government during the Contra war—the film uses this true tale as a satirical attack on American ultrapatriotism and a freewheeling condemnation of “manifest destiny.” Featuring a powerful score by Joe Strummer and a performance of intense, repressed rage by Harris, Walker remains one of Cox’s most daring works. – Criterion Collection

“Repo Man” is one of those movies that slips through the cracks and gives us all a little weirdo fun. It is the first movie I know about that combines (1) punk teenagers, (2) automobile repossessors, and (3) aliens from outer space. This is the kind of movie that baffles Hollywood, because it isn’t made from any known formula and doesn’t follow the rules. – Roger Ebert

About Featured Filmmaker, Alex Cox
Alex Cox is a British film director, screenwriter, actor, and nonfiction author noted for his idiosyncratic style and approach to scripts. His credits include Repo Man (1984), Sid and Nancy (1986), Straight to Hell (1986), Walker (1987), Highway Patrolman (1991), Revengers Tragedy (2002) and Searchers 2.0 (2007). He has worked in Nicaragua, Mexico, Spain, Holland, and Japan, and screened films in and out of competition at Venice, Cannes, Berlin, Tokyo, Rotterdam, Toronto and other festivals. His scripts and materials are archived at the National Media Museum in Bradford, England. He studied at Worchester College, Oxford; Bristol University; and UCLA, and he taught film production and screenwriting at the University of Colorado. Alex Cox has also directed documentaries (including a biography of Kurosawa and a homage to the Emmanuelle films), shorts, music videos, political election broadcasts, and stage plays. He is the author of two film-related books, X Films (about making ten of his independent features) and Ten Thousand Ways to Die (a chronological history of the Italian Western). He is working on a third film book, also about Westerns, and writes regularly for The Guardian and for Film Comment. He recently completed a documentary, Scene Missing (about the making of Dennis Hopper’s legendary unseen film, The Last Movie), and is preparing to shoot a feature adaptation of Harry Harrison’s science fiction novel, Bill: The Galactic Hero. Further info at www.alexcox.com

About Visiting Programmer, Mike Plante
Mike Plante has been a film festival programmer since 1993, including at CineVegas and Sundance since 2001. He started Cinemad Magazine in 1998 to cover experimental filmmakers and character actors. Cinemad continues today as a blog and podcast at IBlameSociety.com. As a producer he has helped make the short film series Lunchfilm (films made for the cost of a lunch) and Orbitfilm (shorts made with footage from NASA) and feature documentaries, including Scrap Vessel (2009), Be Like An Ant (2011) and the upcoming Giuseppe Makes A Movie (2014).

About BasilicaScope
BasilicaScope digs into the visceral aspects of motion pictures by celebrating films that explore the furthest extremes—from remote landscapes, unconventional perspectives, fanatic personalities, radical examinations of film’s materiality, to the blood and emotion that create it. BasilicaScope presents extraordinary films during its weekend-long summer festival in a reclaimed 19th century factory. From lo-fi to hi-fi to sci-fi and nothing in between.

Basilica Screening Series
BasilicaScope is a continuation of Basilica Hudson’s commitment to bring more film to Hudson, with a weekly film Screenings Series. Basilica Screenings is a film series that presents an array of works from new and repertory narrative features, documentaries, experimental films, video and media art, as well as guest curated programs, often with filmmakers and special guests in attendance for a discussion following the screenings. Programmed by Basilica Hudson’s film curator Aily Nash, and creative directors Melissa Auf der Maur and Tony Stone, Basilica Screenings runs from June through October.

BasilicaScope is presented in association with Rooftop Films.