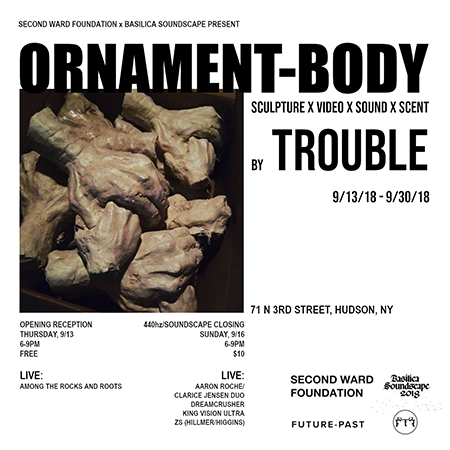 Basilica SoundScape aims to encourage attendees to explore the city of Hudson during their stay, and will again feature a satellite event in a partner performing arts venue.

2018’s satellite event will be hosted by Basilica collaborators Second Ward, and will feature a show of object, video and sound work by art duo Trouble.

Trouble return to Hudson for the first time since their large-scale installation as part of Basilica Hudson’s 24-HOUR DRONE event in 2017. Entitled Ornament-Body, the show gathers and presents performance, sound, video, sculpture and installation work from Trouble’s dozen years of practice. The show will be open to festival attendees throughout the weekend.

Trouble’s work interrogates assumption about culture, performance practice and setting, through sculptural, audio, light, and theatrical intervention. Specifically Trouble’s work is concerned with the role of the body in the social space of performance and other cultural rituals. Trouble explores this issue by actually manipulating and guiding the positions of bodies in space. Performers, audience, and organizers operate in the settings Trouble creates under disorienting, playful, but ultimately frustrating circumstances. By manipulating every parameter of cultural presentation, Trouble explores the possible meanings of examining our most ingrained cultural rituals for communities of creative practice and audiences.

King Vision Ultra is the sound ritual project of New York City native & PTP label head, Geng. A handful have called it “doom metal meets ’90s hip-hop,” but one time someone went further to say, “Dystopia over old RZA beats fed through a RAT pedal.” I say it’s a channeling – the sharing of personal ills with the other entity in the room.

Among The Rocks And Roots is Abdul Hakim-Bilal and Samuel Goff of Richmond, VA. They are an unrelenting wall of long and winding noise rock rooted in ideas of trance-induction. “Islands of serenity in a sea of cacophony. Distressed heavy, world music exploring the darkest recesses of the soul.”

Zs (Hillmer/Higgins) was founded in 2000 and has existed as a trio, sextet, and quartet, tho 9/16 performance for Soundscape at 2nd Ward will feature a rare duet performance of Sam Hillmer and Patrick Higgins. Zs is primarily concerned with making music that challenges the physical and mental limitations of both performer and listener. Manipulating extended technique, unique instrumental synthesis, and near telepathic communication, Zs aims to create works that envelop the listener and unfold sonically over time.

Dreamcrusher Playing a fringe yet stylized version of noise and industrial that is intellegent, expressive, and powerfully physical, Dreamcrusher is the solo musical endeavour of multidiscilinary artist Luwayne Glass- hailing from Wichita, Kansas. Formed in 2003, reveling in the aughts of myspace, tumblr, soundcloud and other social media sites, Dreamcrusher began as a project of self-discovery and self-release while contained in a queer, gender non-binary (they/them pronouns, not he/him or she/her), black body in America’s bible belt. Creating over thirty releases, splits, extended plays and singles all before 2014, without ever releasing a full-length album, each project shows a very individual growth while sitting in many scenes that often don’t lend themselves to explicit artistic morphing. The Dreamcrusher project and their releases have become increasingly more personal, confrontational, concise and challenging. After migrating from Kansas to New York City, their success hit new heights diving headfirst into the American live DIY scene. Dreamcrusher continues to alter the overwhelmingly rigid aesthetic of ‘noise’ and underground scenes by expanding the meaning of ‘genre’, and in many ways completely distorting ‘genre’ to form to them rather than the reverse. They choose not to underestimate the intelligence of their audience by challenging them at every sea change.

Aaron Roche and Clarice Jensen: Aaron Roche is a singer-songwriter with an ear for the avant-garde; a contemporary composer who sings American folk music; an instrumentalist who works as a recording engineer. Roche’s musical CV offers some insight into his craft. He performs (guitar) in the touring bands of musicians as diverse as R. Stevie Moore, Lower Dens, Sufjan Stevens and ANOHNI, he has composed music for the American Ballet Theatre, he has played trumpet with his father’s brass ensemble. Clarice Jensen is the artistic director of ACME, the American Contemporary Music Ensemble. A graduate of The Juilliard School, she studied with Joel Krosnick, Harvey Shapiro and has taken master classes with many composers such as Milton Babbitt, Elliott Carter and Roger Reynolds. Recording artists she has collaborated with include Jóhann Jóhannsson, Stars of the Lid, Owen Pallett, Max Richter, Tyondai Braxton and numerous others.