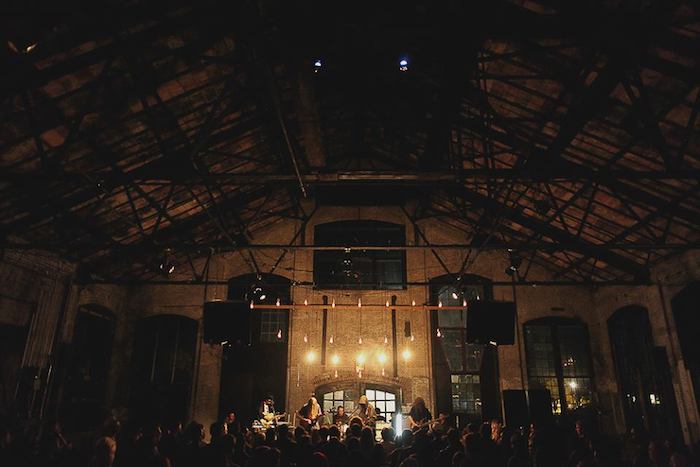 “In an Old Factory Space, Artists Make Festive New Statements: A declaration and a creative act, in which a lot of different kinds of musical and literary sensibilities, low-key or oblique or confrontational, barely out of the egg or middle-aged and experienced, can be made memorable by juxtaposition and setting.” 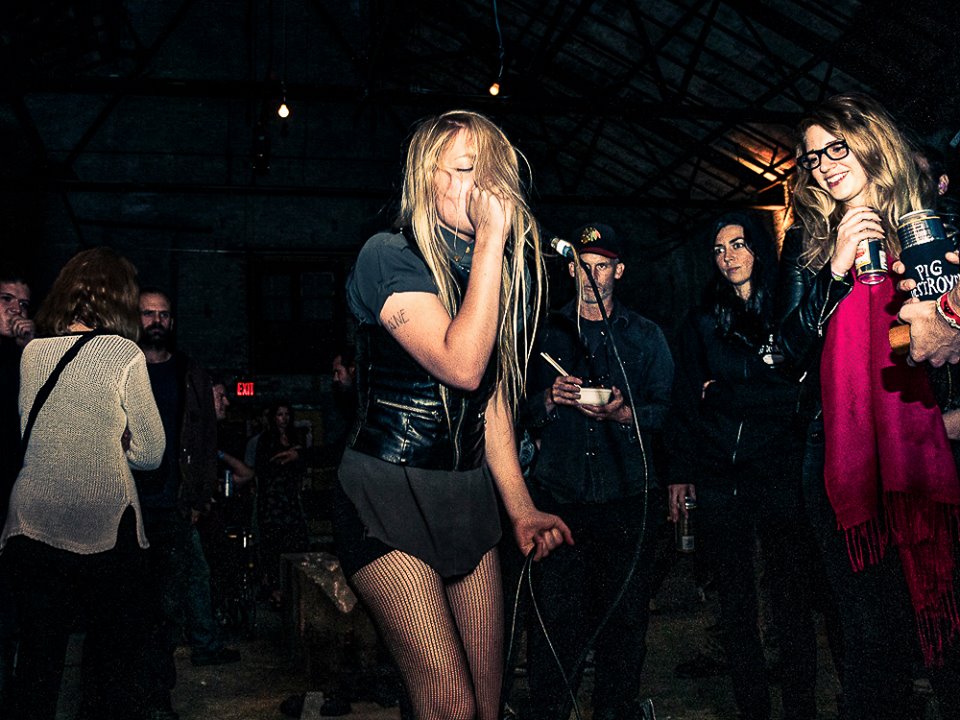 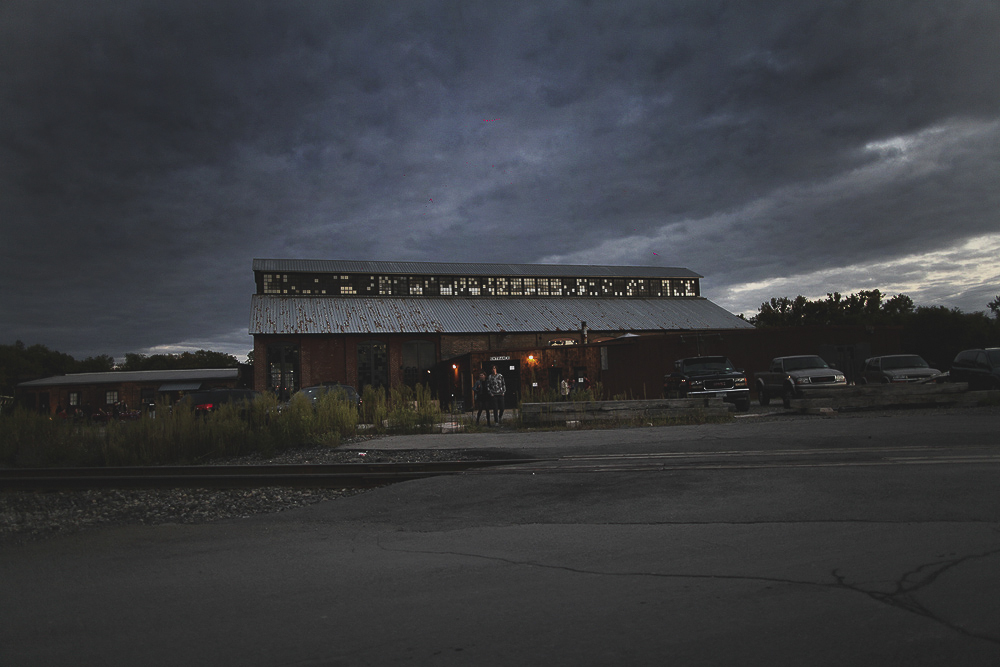 Sasha Frere-Jones for the New Yorker wrote: “take them to church”. Ours is a former forge & foundry, turned glue factory, industrial kind of church but a committed audience did commune last September for Basilica SoundScape. Presented in association with Pitchfork, it is a carefully curated weekend program featuring a wide range of music, visual art and literature that highlights specific connections and overlaps, instead of the usual “festival”-style overload, drawing parallels between artists and voices not widely heard in relation with one another.

“For a 20-minute experiment on Friday conceived by the composer Jonathan Bepler, the conceptual artist Matthew Barney and Mr. Stosuy, the night’s four musical acts took positions against each wall of the main room. They were cued through numbered ideas by Mr. Bepler, who stood in the middle and held up fingers to indicate what he wanted: “fragment,” “song,” “loop section,” etc. And so the throb of Pharmakon pounded against the clear tones of Ms. Barwick and the beats of Evian Christ, punctuated by sharp spasms of Pig Destroyer. It was no better than its individual ingredients, but it was bold and game and crazy and special, a better than good-enough metaphor for the festival itself.”

Basilica Soundscape (thanks to all our collaborators & volunteers) was a great success, bringing an audience of both locals and visitors who enjoyed being challenged, provoked, and engaged – as well as those who didn’t mind camping with views of the mountains alongside the Hudson River. Stay tuned for Basilica SoundScape 2014. 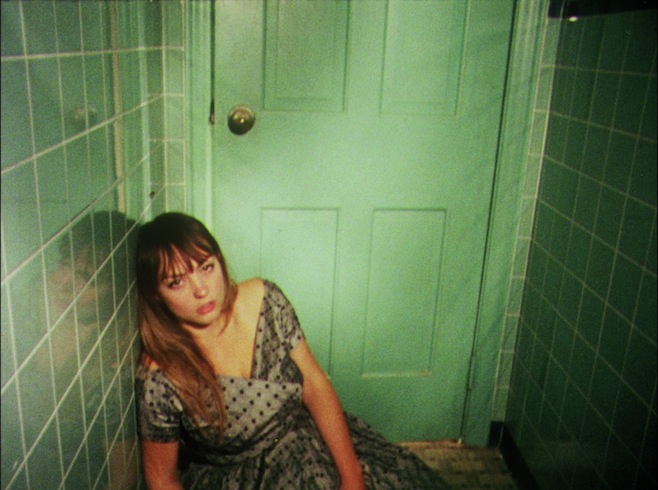 An Angel in Hudson:

Basilica was fortunate enough to host rising independent folksinger Angel Olsen – whose music combines fearlessness with soulful vulnerability in such a way that audiences instantly connect to her work. Olsen is inspired by what she describes as “being home, feeling home within yourself, simple things like homes and existence and death and birth.” Yet another, “take them to church” evening. Candles burning in sacred silence of a mass with this songstress at the helm. 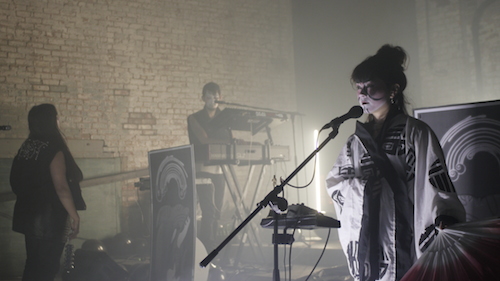 A total performance piece involving music, set design, makeup, and art, which has been described as “resisting labels” and “genre-less”. This was the Blakk Ballon Ball headlined by Yamantaka//Sonic Titan and Jenny Hval with special guests Tanz Praxis featuring C. Lavender. YT//ST is an Asian, indigenous and diasporic collective with elements of classical Japanese dance theater, psychedlia, rock operatics, manga comics, and makeup influenced by Kabuki and Kiss. Halloween has never been so wonder-full and weird in Hudson.

The Evens: Ian MacKaye and Amy Farina
Presented in collaboration with Fat Cat, with only a week’s notice, The Evens played to a packed house. The punk duo was formed in the fall of 2001, comprising partners Ian MacKaye on baritone guitar (of Fugazi, formerly of Minor Threat) and Amy Farina on drums (formerly of The Warmers). The fantastic turnout was a testament to the loyalty and commitment fans have towards the Dischord Records founder and pioneer of the Washington DC underground scene that spearheaded the DIY ethic in the USA.

From performance, to music, to film and exhibitions, Basilica is commitment to bringing unconventional, one-of-a-kind and not-widely-seen work and ideas to our community, while introducing visitors to the intriguing small city of Hudson, NY.