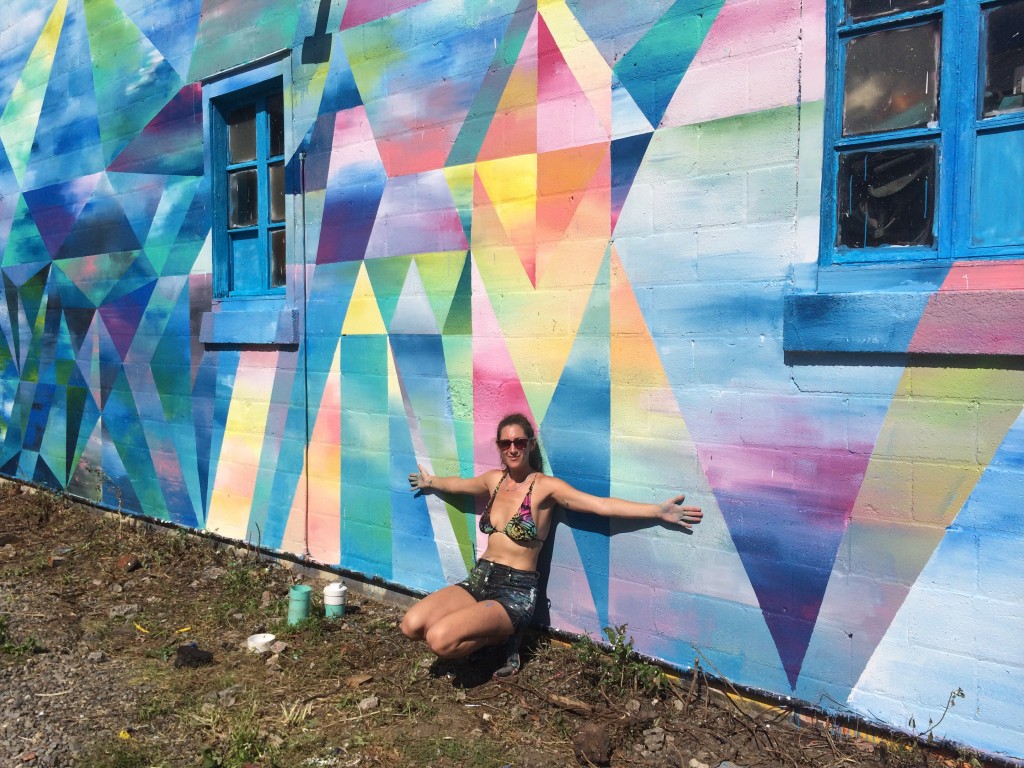 We expanded our visual art programming this year. World renowned artist, Sterling Ruby, collaborated with us for Basilica SoundScape and created a backdrop for the stage in acid reds, yellows, and deep black which snaked up our factory walls. We also partnered with visiting galleries such as Zach Feuer of Retrospective Gallery and James Fuentes Gallery, and launched a long-dreamed-of exhibition of whale bones by Maine-based brothers, Frank and Dan DenDanto. In the shadows leading up to our annual Basilica SoundScape weekend of music and art, artist Kelie Bowman (pictured above!) of Cinders Gallery painted a large-scale mural, assisted by a team of able volunteers. Jim Krewson’s notable EMPLOYEE OF THE MONTH portrait of Marina Abramovic was a hit over the weekend as well. And, thanks to the New England Foundation for the Arts, we were fortunate to kick off the season with a project close to our hearts: ECLIPSE, a work by choreographer Jonah Bokaer and avant-garde visual artist Anthony McCall. 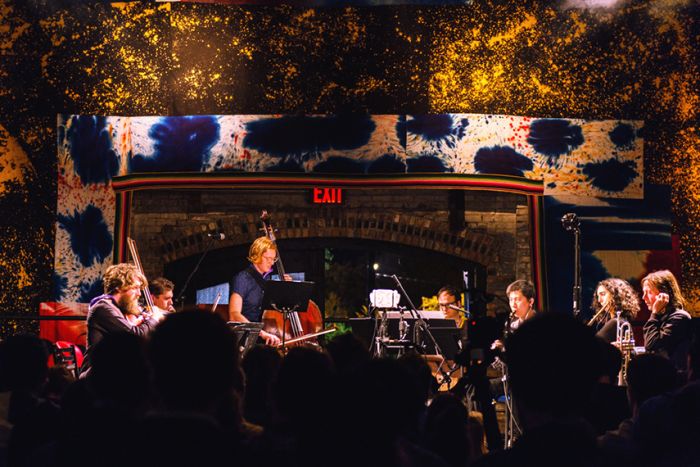 STERLING RUBY x SOUNDSCAPE
One of the art world’s most controversial and successful artists, Sterling Ruby, was a highlight of art at Basilica SoundScape! Possessed of a profound material sensibility, Sterling Ruby’s art speaks in a language inspired by sub-cultural phenomena ranging from graffiti, urban gangs, and prison systems, to craft and the history of quilt-making. His stage was the ultimate backdrop to a weekend of music featuring the likes of Swans, Deafheaven, and White Lung.  (He even put together an excellent playlist for ARTINFO!) 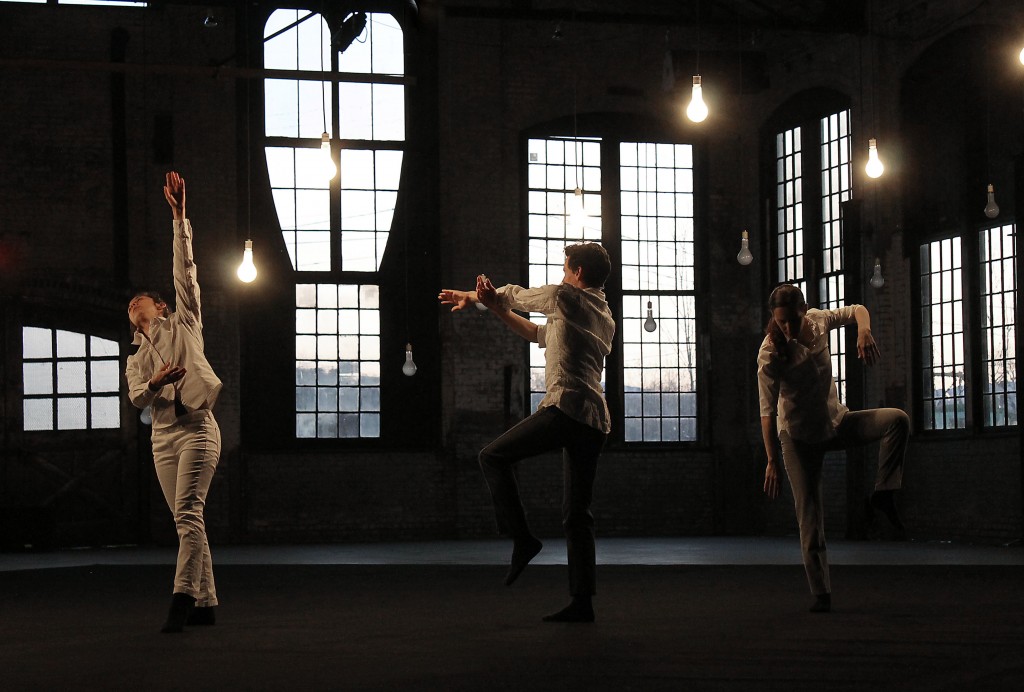 ECLIPSE
ECLIPSE was a sight-specific blend of choreography, art installation and experimental cinema that explored the perception of space at its most elemental. Inspired by the experience of watching the lunar eclipse from the Hudson Valley, and conceived and workshopped by Bokaer within Basilica’s factory walls as part of our first artist residency in 2012, it was a radiant inauguration to our 2014 season. Evocative dance, industrial sounds and flickering light bulbs conspired to create a performance timed to end at sundown each night. Bokaer’s four dancers traversed a field of light on an in-the-round stage created by McCall, who is renowned for his large-scale, imaginative outdoor multimedia installations. The performance made its debut at the 2012 BAM Next Wave Festival, so bringing the work back to Hudson seemed a fitting and natural way to complete the creative cycle. 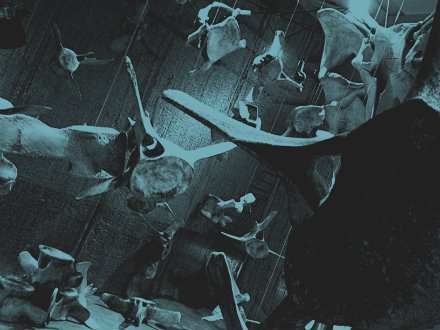 BUMP
BUMP was perfectly in step with our dream to bring more awareness and honor to WHALES at Basilica. The exhibition included bones from three different whales hanging in the Main Hall. The bones were suspended at eye level, inviting viewers to interact. When touched, the bones were set in motion, causing shadows to dance around the space. The brainchild of brothers Frank (a set and lighting designer) and Dan DenDanto (a cetacean biologist), BUMP embodied Basilica’s commitment of celebrating the epic, eclectic history of Hudson, defined by the whaling industry. A dramatic closing party included the acapella trio Black Sea Hotel, known for their arrangements of Balkan folk songs, weaving together ancient and contemporary sounds in an otherworldly, harmonic blend. A match made in whale heaven. 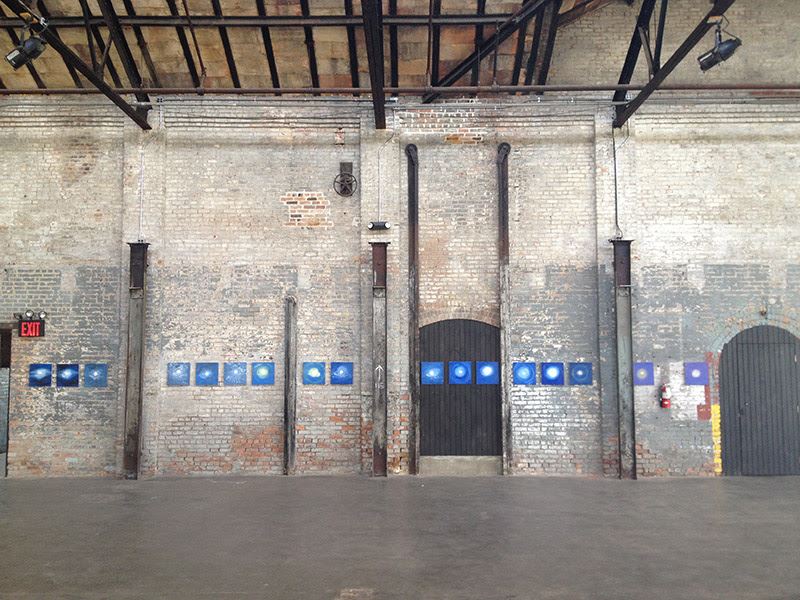 Curated by Erin Falls, Ambulance Blues featured artists who recognize the hyper-connectivity and loneliness of contemporary life, but make work which connects this paradigm with the sublime. “Good art is about knowing and feeling that you live in a fucked up world, but still being able to pull out the good human parts and point towards them,” said Falls. The community of artists on view made that clear, with an after-opening party featuring intimate, energized performances by Big French, Penn Sultan of Last Good Tooth, Lissy Trulie and Imaad Wasif with guest drummer Brian Chase of the Yeah Yeah Yeah’s.

JAMES FUENTES + BASILICA PRESENTS HAUTE SURVEILLANCE + RAYMONDE BERAUD:
The launch and reveal of our new Back Gallery space was a collaboration with James Fuentes Gallery, which presented two satellite exhibitions emanating from their space on the Lower East Side in NYC. First was a solo presentation of works by London-based Greek artist Raymonde Beraud. Second was Haute Surveillance, a three-person exhibition of work by Valerie Keane, Andy Meerow, and Daniel Peterson, organized by James Michael Shaeffer, Jr.