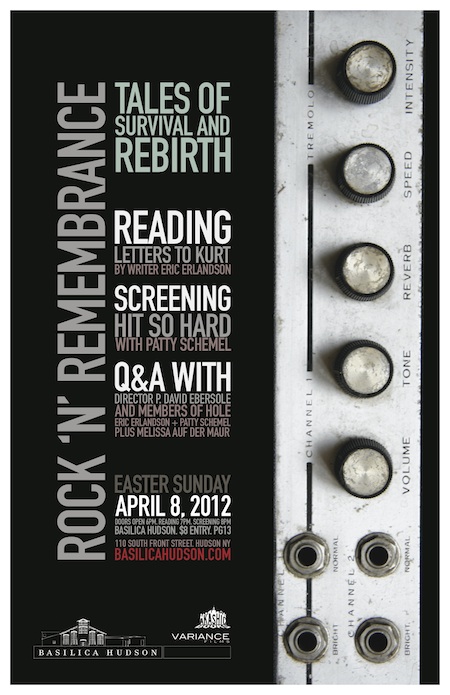 Basilica Hudson opens its 2012 season on Easter Sunday, April 8th with a truly unique book reading and film screening featuring two true stories of life, death and survival in and around two seminal 1990s rock bands. This intimate evening will include an in-person reading by Hole lead guitar player and co-founder Eric Erlandson from his new book Letters to Kurt and a screening of documentary film HIT SO HARD: The Life and Near Death Story of Drummer Patty Schemel. Director, P. David Ebersole, will be in attendance for a Q&A following the film. The evening will conclude with Hole members Patty Schemel, Eric Erlandson and bass player Melissa Auf der Maur who will participate in a Q&A and a short stripped down musical performance. Join us for this rare event in Hudson, NY, the only one of its kind scheduled outside of New York City and Los Angeles.

When Nirvana burst onto the national scene in 1991, the music they played spoke directly to a generation that had emerged from the Reagan-Bush years angry and disenfranchised. As grunge took off, the music industry was completely transformed in a way nobody expected … especially the young musicians who went from tiny shared Seattle apartments to international superstardom, sometimes overnight. Some handled it well … and some did not. Just three years later, the drug-related deaths of several prominent musicians, capped by the suicide of Kurt Cobain, closed the books on an all too brief era.

Letters to Kurt, written by Eric Erlandson as an elegy for his friend Kurt Cobain, takes the form of 52 letters, and is an anguished, angry, and bleeding-heart meditation on rock’n’roll, sex, suicide, and the questions that follow. “I see these letters as songs; a fifty-two-card pick-up,” says Erlandson, who studied writing in the years following Hole and found inspiration in the work of Jim Harrison, Patti Smith, and Charles Bukowski. “In no way do I intend to glorify or romanticize Kurt’s chosen way out, nor make light of it … I thought if I could sort out my struggles and disappointments, face my demons, maybe I would be in a position to help others.” 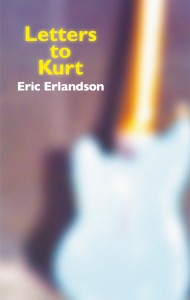 “The reverberations of Kurt’s suicide last to this day, and have touched the lives of many. Dozens of people could have written their own version of this bracingly candid book; Eric has written one, filled with rage and love, landmined with detail, that can stand for them all.” — Michael Azerrad, author of Come As You Are, The Story of Nirvana

“Nearly two decades after the death of Kurt Cobain, a friend and fellow musician not only continues to mourn his suicide, but also rages against the culture that he holds responsible . . .The pain is real and powerful, and the book’s major indictment is of a celebrity culture in which ‘all beauty has poison under its skin, fangs beneath its gums, a bullet with your name on it, in the name of fortune and fame. If the art doesn’t kill you, the fame surely will.’ A catharsis for the writer and perhaps for the reader as well.” — Kirkus Reviews

HIT SO HARD, directed by award winning filmmaker P. David Ebersole, tells the story of Patty Schemel, the acclaimed drummer of Courtney Love’s seminal rock band Hole, and her rise to fame (and nearly fatal fall from it), with no punches pulled…and it’s one hell of a story. Right in the middle of 90s grunge, Patty, an openly gay woman, always felt ‘different’ but never dreamed she would be part of a multi-platinum selling band, touring with legends, or on the cover of Rolling Stone. Or that, thanks to drug addiction, she could lose it all. Told with insider interviews and stunningly intimate, never-before-seen footage shot by Patty and her friends (Patty was given a Hi-8 camera just before Hole’s infamous Live Through This world tour), HIT SO HARD is not only an all-access backstage pass to the music that shaped a generation, but a harrowing tale of overnight success, the cost of addiction, and ultimately, recovery and redemption. HIT SO HARD will be released in theaters on April 13th at the Cinema Village in New York City, and in other cities across the nation. 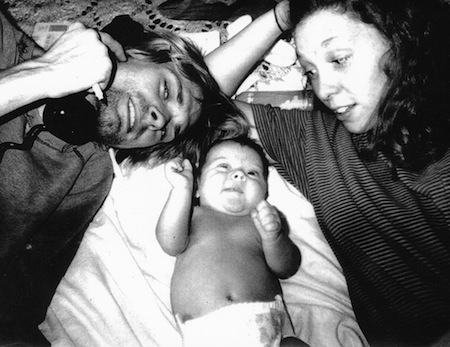 “[A] pull-no-punches portrait… shocking and disorienting in its intimacy.” – INDIEWIRE