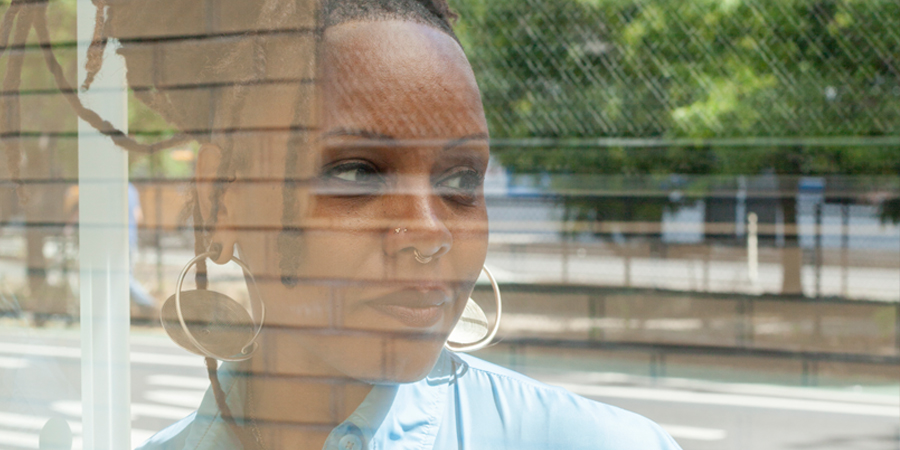 “a major talent” – The Wire

“the spokeswoman for a new, politically conscious and refractory music scene” – Jazzthetik

“Memory is a powerful thing, but it’s so private, fluid, and unreliable that it can seem almost impossible to capture in a work of art — and history is often no more stable, once you look closely enough. Roberts has succeeded at evoking both, though, and gives her audience a long look at something ghostly, tragic, and beautiful. She is carving out her own aesthetic space, startling in its originality and gripping in its historic and social power.” – music critic Peter Margasak

Matana Roberts is an internationally renowned composer, band leader, saxophonist, sound experimentalist and mixed-media practitioner. Roberts works in many contexts and mediums, including improvisation, dance, poetry, and theater. She made two records as a core member of the Sticks And Stones quartet in the early 2000s and has gone on to release a diverse body of solo and ensemble work under her own name on Constellation and Central Control over the past decade. She is perhaps best known for her acclaimed Coin Coin project, a multi-chapter work of “panoramic sound quilting” that aims to expose the mystical roots and channel the intuitive spirit-raising traditions of American creative expression while maintaining a deep and substantive engagement with narrativity, history, community and political expression within improvisatory musical structures. Constellation began documenting the Coin Coin project in 2011 and has released the first three of a projected twelve album-length chapters to date.

Widely praised for the stylistic innovations and narrative power of her work, experimental musician and self-taught mixed media composer Matana Roberts will play a FREE solo saxophone concert at Basilica Hudson on July 10. The concert will be followed by a Q&A with Matana. Her work is challenging, confrontational and complex. We are thrilled to have the opportunity to host her.

Born in Chicago, Roberts received most of her formal training from free arts programs in the american public school system.

She is a past member of the Black Rock Coalition (BRC) and the The Association for the Advancement of Creative Musicians (AACM), and a lifetime member of the Tri-M Music Honors Society. She has been a Van Lier Fellow, a Brecht Forum Fellow, a Copeland Fellow, an ICASP fellow, a 2013 FCA fellow and a seven-time Alpert Award In The Arts nominee, receiving the award in 2014. In 2014 she also received the Doris Duke Impact Award. In 2016 she received the Doris Duke Artist Award. She held a residency at the Whitney Museum of Art in the summer of 2015, during which she produced a series of research-based sound works entitled i call america.

She has been invited to teach, lecture, run workshops and/or take up artistic residencies in countless places under diverse conditions and with diverse communities over the past decade and is a past faculty member of the Banff Creative Music Workshop, School for Improvised Music, and Bard College MFA, where she is currently ongoing faculty. She was co-chair of the Music and Sound Department from 2011 – 2012.