MARCH ON: SCREENING AND PANEL DISCUSSION 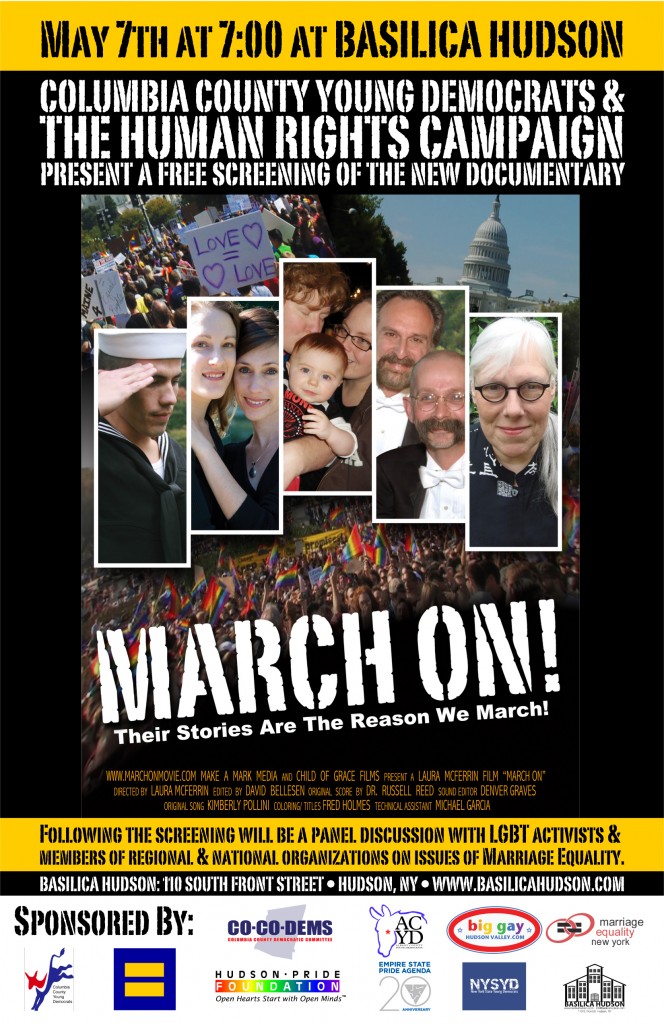 March On, a new documentary about the battle over marriage equality in the United States, will be screened as part of an evening program hosted by the Columbia County Young Democrats and the Human Rights Campaign.  Following the screening there will be a panel discussion on future strategies regarding same-sex marriage featuring members of key organizations involved in the struggle for equality.

March On begins and ends on October 11, 2009 at the National Equality March in Washington, DC and spotlights five families struggling for recognition in the battle for marriage equality. They include two moms on a road trip to states offering marriage equality; a married lesbian couple from California allowed to keep their union after the November, 2008, passage of the anti-gay Proposition 8; a New York gay couple together 32 years and their battle against religious bigotry; a Navy veteran dismissed under Don’t Ask, Don’t Tell; and an activist involved in the movement for more than four decades. the documentary also features high-profile supporters of marriage equality, including Lady Gaga, Lt. Dan Choi, Cleve Jones and Cynthia Nixon.  After its world premiere at the 2010 Austin Gay and Lesbian International Film Festival, March On has played film festivals across the country. The running time of the film is 90 minutes.

Participants of the panel discussion include Robert Voorheis, Citizen Lobbyist representing Marriage Equality New York PAC in Albany and one of the stars of March On; Sheilah Sable, Director of Upstate Organizing at the Empire State Pride Agenda; Shirin Khosravi, Regional Field Director of the Hudson Valley for the Human Rights Campaign; Matthew Peter, Vice President of the New York State Young Democrats; and Jay Blotcher, a participant in the historic New Paltz weddings of 2004 and co-organizer of the massive 2008 New York City Prop. 8 protest.  Following the discussion there will be a reception with refreshments.

For more information on this event please click HERE