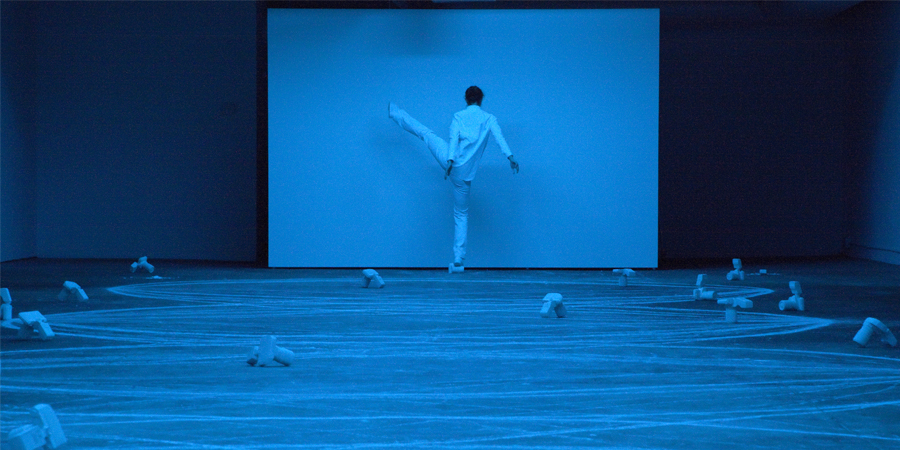 We welcome Jonah Bokaer and dancers back to Basilica’s Main Hall. The troupe will be returning for the third time since Basilica’s inception, for a performance run of their repertory piece OCCUPANT. Created in 2013, OCCUPANT is one of the few iconic pieces of choreographer Jonah Bokaer with long-time collaborator, visual artist Daniel Arsham. The work was inspired by Edward Albee’s 2001 play of the same name, staging the now-dead, wildly flamboyant sculptor Louise Nevelson against an anonymous interviewer for posthumous questioning. Bokaer’s production takes place on a monochromatic, blue-hued stage where Arsham’s scenic elements and original sculptures include plaster casts of relics objects such as 35mm cameras, super 8 cameras, and reels of film. Performed by Tal Adler-Arieli, Sara Procopio, Betti Rollo, the music is by leading Japanese electronic composer and sound artist Ryoji Ikeda, and with a special appearance by Bokaer.

“Jonah is the pioneer of dance at Basilica Hudson. He was the first to bring the art of dance within our walls during our inaugural programming year and then heroically returned in 2014 when he workshopped and performed his highly acclaimed Eclipse. He, is to date, our sole Dancer-in-residence and is Basilica’s own guardian angel of Dance. We are so excited to welcome his singular vision and team back”

“Basilica Hudson has been the pioneering home of Jonah Bokaer Choreography, since the very beginning. Production as large as the BAM Fisher inauguration, and as intimate as the local Hudson Valley dance Festivals, have been held it its unforgettable walls – a boundless space for creativity. Following the success of our National Dance Project touring award to Basilica Hudson, in 2014, we return with OCCUPANT, funded by NYSCA, to move and shake the Hudson Valley with a site-specific performance, dedicated to the space.”