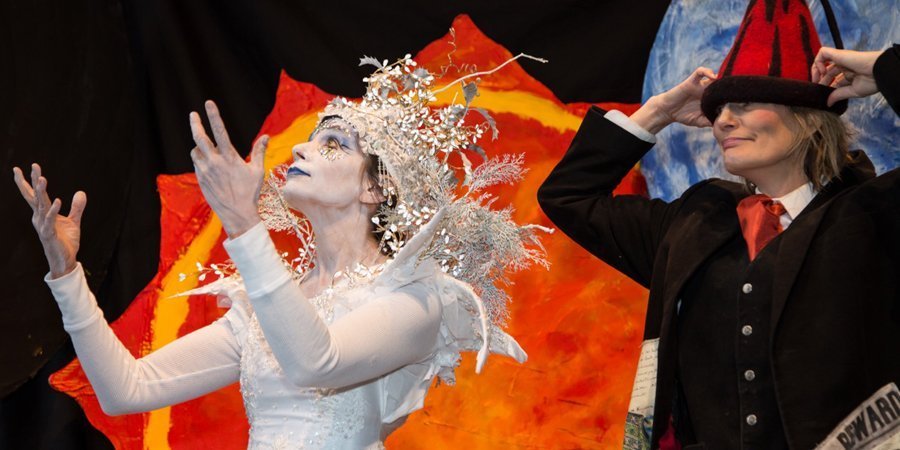 Produced in partnership with Harpooned Productions, an artistic production company led by installation and performance artist J. Patrick Doyle, Imbolc Riverfire is a multidisciplinary installation that engages ancient folk traditions and rituals not usually shown in a contemporary art context.

Inspired by the Greek myth of Demeter and Persephone, Imbolc Riverfire is an Eleusinian festival of fire and light. Through music, movement, sculpture, and performance taking place in Basilica Hudson’s reclaimed industrial factory, the multidisciplinary installation follows the metamorphosis of Demeter into different forms as she searches for her daughter, Persephone, who has been abducted by Hades, god of the underworld, and taken beneath the Earth to be his bride.

The performance begins as the Greek goddess Demeter, goddess of the harvest and of fertility, transforms into an Eagle to search the Earth’s air for her daughter Persephone. The Eagle will come to life in the 100 foot long nave of Basilica Hudson as a series of large-scale sculptures. As the Eagle moves through the nave, the audience learns that the flight of the Eagle across the Earth is unsuccessful for Demeter, and she transforms again, this time into a lion, to continue her search. The lion is a second large-scale sculpture that will move across the hall, its heart beating, its mane flowing as it breathes. The lion’s movements will cue a speech and movement chorus, incorporating poetry and dance into the installation. Demeter finally morphs into an Ox, a large-scale pageant wagon featuring a drum ensemble whose chorus of beats mimics thunder. The pounding of the drums invokes the secrets and wisdom of Gaia, the Greek ancestral mother of all life, revealing the whereabouts of Persephone. The Greek goddess Hecate and her three accomplices bearing torches are summoned by the rousing sound. Hecate assists Demeter in her search for Persephone, guiding her through the night with the flaming torches. Persephone appears in the form of a giant anthropomorphic shape that approaches the performance ensemble at the center of the Main Hall and leads the group in a final movement of music, dance, and pageantry, welcoming and celebrating the arrival of spring.