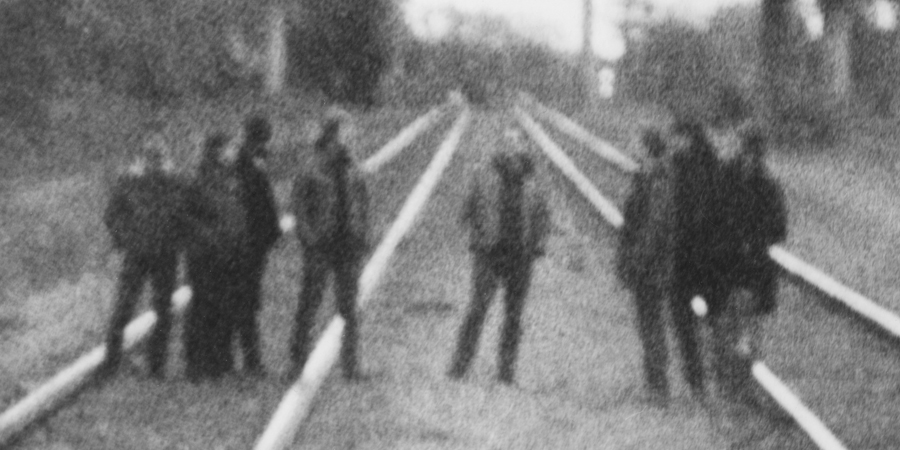 Legendary Montreal musical collective Godspeed You! Black Emperor will return to Basilica Hudson on Thursday, August 9th. The band, who last performed at Basilica in 2015, recently released their seventh full-length album Luciferian Towers on their own self-run record label Constellation. The show will mark the band’s third performance at Basilica Hudson.

With a fascinating 20+ year history, Godspeed You! Black Emperor is known for mesmerizing live shows and sense-rattling, wall-of-sound performances marked by orchestral dynamics, epic rock power, and clunky beautiful film loops. The band has featured as many as 14 performers and released 7 albums to widespread critical acclaim.

Tickets for Godspeed You! Black Emperor’s performance are available here for $25 advance. Funds raised from the show will go towards furthering our mission to support independent and innovative arts and culture.

It’s such an honor to have the Montreal clan return to our industrial church for another evening of upstate sonic immersion and we are so grateful for their support.

With offshoots to the project including The Silver Mt Zion Memorial Orchestra and Tra-La-La Band, Hrsta, Fly Pan Am, Esmerine, 1-Speed Bike and Set Fire To Flames, GYBE went on hiatus in 2003 before returning to live performance in December 2010, when the band was invited to curate and perform at All Tomorrow’s Parties in the UK. This was followed by renewed and extensive international touring. October 2012 saw the release of ‘ALLELUJAH! DON’T BEND! ASCEND!, their first recorded work in a decade, to near-unanimous critical acclaim, including a 9.3 rating and Best New Music at Pitchfork and the appearance on countless year-end lists. The similarly praised Asunder, Sweet And Other Distress followed in March 2015; this album marked the group’s first personnel change in many years, with Tim Herzog replacing Bruce on drums. Throughout Godspeed’s ‘post-hiatus’ period, experimental filmmaker Karl Lemieux has been the band’s primary creator (and projectionist) of 16mm film footage and loops; an array of analog film projectors remains central to GYBE’s live performances.

Godspeed collaborated with Holy Body Tattoo on monumental in 2016-2017, performing live to the acclaimed modern dance piece in various cities around the world. The band also premiered new work commissioned to memorialize the 100th anniversary of the WWI Battle of Messines at a live concert event on the site of the massacre at Heuvelland, Belgium in June 2017.

PLUS
Jessica Moss
Montreal violinist Jessica Moss has performed and recorded with a wide spectrum of ensembles over the last two decades. Best known as a permanent member of Thee Silver Mt. Zion Memorial Orchestra, she was also a founding member of avant-klezmer group Black Ox Orkestar, recorded and toured with the Vic Chesnutt band for the two albums released on Constellation, and worked extensively with Carla Bozulich’s Evangelista. She has also performed and recorded as a guest with many of Montreal’s best known artists, most recently with Big|Brave on their acclaimed 2016 record for Southern Lord.