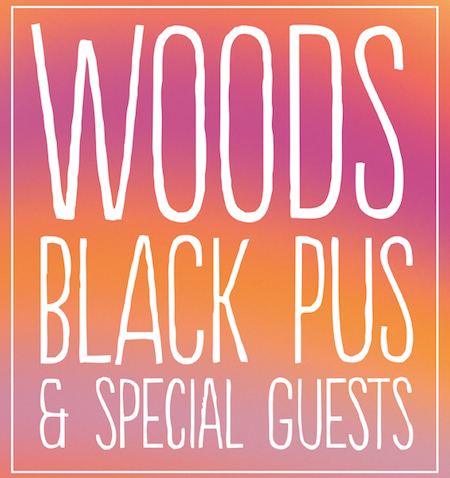 BASILICA HUDSON, WGXC and JEAN DEUX are pleased to announce its first collaboration during the 2012 season in celebration of Hudson’s annual Flag Day festivities.  The evening will include performances by critically acclaimed bands WOODS and BLACK PUS, with DJ BUNNYBRAINS and additional guests to be announced. This is to be the first of many events co-produced by WGXC, Basilica Hudson, and Jean Deux celebrating the creative synergy between the entities.

A lo-fi indie folk-pop band from Brooklyn, WOODS feature members of the indie rock band Meneguar and are associated with the Woodsist label. Founded as a side project for Meneguar band members Jeremy Earl and Christian DeRoeck, Woods made its recording debut in 2005 with “How to Survive In/In the Woods.” In 2007, Woods released a series of recordings, among the series, “At Rear House” was particularly well received. The successive full-length Woods release, Woods Family Creeps (2008), released on Time-Lag Records, marked the inclusion of new band members Jarvis Taveniere (also of Meneguar) and G. Lucas Crane. Upon its 2009 release, “Songs of Shame” was championed by Web site Pitchfork as some of the year’s “Best New Music,” writing, “along the way, Woods can evoke any number of their lo-fi ancestors, from early Guided by Voices to the murkier depths of the Siltbreeze or Flying Nun back catalogs, but they’re still able to retain their own immediately recognizable off-kilter character.” The group released their third album, “At Echo Lake”, in late spring of 2010, and followed it a year later with “Sun and Shade.” Amid a regular touring schedule, in 2012, the band worked with California circuit-bender Amps For Christ for a collaborative split LP.

BLACK PUS (the solo moniker of Brian Chippendale of Lightning Bolt since 2006) is a musician and artist based in Providence, R.I. Chippendale is best known as the drummer/vocalist for the bands Lightning Bolt and Mindflayer. Chippendale is known for his fast-paced, frantic drumming. In the Peter Glantz and Nick Noe film “The Power of Salad,” which documents a string of Lightning Bolt performances across America, Chippendale likened his drumming to his drawing style. “I feel like everything I do has something to do with filling up space. I dunno, almost the way I drum is the way I draw. It’s like I’m covering every little space with a beat or a hit or something,” he said.

« BASILICA SCREENINGS: JUNE
NOT TO BE MISSED! »