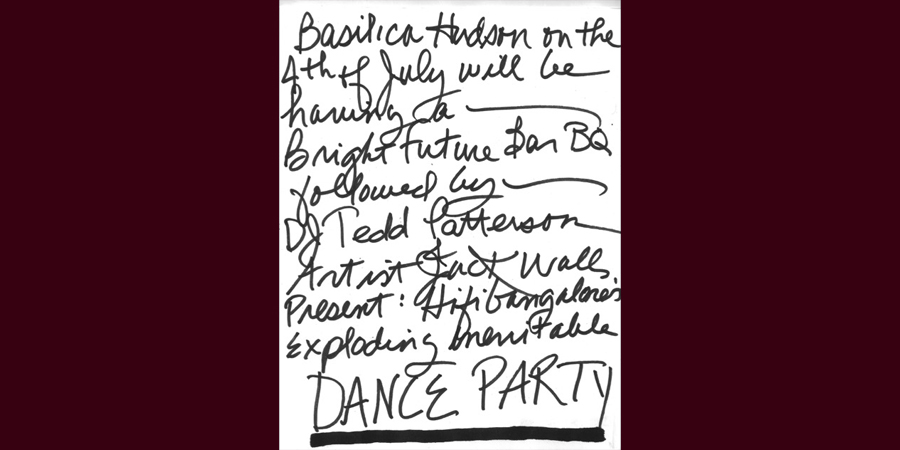 ANOTHER DAY FOR ARTISTS, HUMANS AND OUR FUTURE! Join us for our second annual coming together in the name of art, dancing, snacking, drinking and communing, with Hudson based artist Jack Walls as central muse. A late afternoon art opening and Bar-BQ happy hour turns epic dance party come sundown. This year will culminate in HifiBangalore’s Exploding Inevitable Dance Party with the deep dance grooves of DJ Tedd Patterson and DJ Uncle Rudy, featuring sculpture and video art installation by Kingston based artist Andrew H Shirley, all knit together with some art and hosting by the infamous Jack Walls.

and others.
Shirley will also screen several experimental films from punks, villains and outsiders from around the country entitled Who Am I? (If I’m Not Myself), all screened in Basilica Hudson’s kiln. Plus DJs including WGXC’s Uncle Rudy, happy hour drink specials by The Half Moon bar and FREE tamales from Love Apple Farm!

As a centerpiece to the install, the UFO 907 spaceship from the film entitled “The Beginning if Not the End” (by Brooklyn Based artists William Thomas Porter and UFO 907) will be unveiled before its installed in the Basilica sculpture collection outside on view for the public until the Fall 2018.

ABOUT JACK WALLS: Jack Walls is a remarkable artist, poet and writer, not limited by adherence to any medium. Although he considers himself mostly a writer, his drawings and sketches are done with equal aplomb, not to mention his collaged works which are done with a dexterity that boggles the mind particularly when contrasted with some of his drawing series which almost seem to have the energy of automatic drawings. He is a multi-disciplinarian, whose small and compressed works are composed to scale, depending on the size of his work area, or how small his drawing board.

A longtime veteran of the downtown art scene, in this world, his vision and scope has influenced a vast array of some of the younger artists that habitate the edges of the art world, a position from which a few have managed to successfully launch into careers. His iconic status and relevance continues to grow with the times. He is an ‘inside outsider’, his inside outsider status is no accident, the slick machinations, the ins and outs of the art and fashion worlds leave little to be desired by Mr. Walls. He prefers to go his own way.

ABOUT TEDD PATTERSON: As a DJ, producer and remixer, Tedd Patterson has established himself as a leading talent on the international dance music scene. He has become renowned for a signature sound that incorporates an intoxicating blend of contemporary and classic dance music styles. Thousands of fans worldwide have been seduced by his wickedly innovative sets that combine driving percussive beats and deep techno textures with throbbing progressive house, soaring Afro-Latin grooves and the occasional classic reflecting a diverse array of influences.From his legendary sets for Italy’s Angels of Love to his eagerly anticipated sets at the WMC’s seminal Magic Sessions (along with house music veterans Louie Vega and Tony Humphries), Tedd has earned a reputation for delivering unpredictable, adventurous, and wildly infectious rhythms on the dance floor. Whether headlining with Frankie Knuckles, Danny Tenaglia, or Tom Stephan or manning the decks alongside Steve Lawler or Chus and Ceballos, Tedd consistently crafts intense and varied grooves that have made him a favorite in dance clubs around the world.

ABOUT WASTEDLAND 2: Wastedland 2 is a nomadic site-specific, immersive film installation that has spent the past year touring across the U.S., in galleries, backyards, art and music festivals, illicit screenings under bridges and in freight train yards, and mystical happenings in the desert. Totaling over 11 installations and 40 some screenings the project made front pages and was featured in close to 30 major news/ media outlets (press link below). Each event included new artists and material specific to each location transforming spaces into a three-dimensional post-apocalyptic graffiti wonderland. Here questions of fate and self collided with graffiti folk lore through wordplay, sculpture, artifacts, and characters – all centered around thematics from the film- created by Shirley, his actors and members of the notorious Brooklyn based 907 graffiti crew. This environment allows the viewer to enter the psychology of the narrative, to identify and ultimately re-define the way one traditionally engages with film and artwork.

FILM: Wastedland 2 (30 min/ color/ 2016) is an existential fantasy follows three solitary vandals (played by actual graffiti writers themselves- Wolftits, Avoid, and Smells) who cross paths while searching for the meaning of a trail of enigmatic artworks left behind by UFO 907, another nomadic artist. Roaming from one decaying zone to the next in a never-ending search for beer, weed, and a wall to paint, the vandals form a pact to find UFO and attain the answer to their unanimous question of their futility- “what’s the point?”

ABOUT ANDREW H SHIRLEY: Andrew H. Shirley finds an obsession in living experimentation through a miscreant lifestyle detached from material pop culture. His multi disciplinary work has appeared in PS 1, MOCA, Museum of Sex, and films have screened at festivals in over 300 cities worldwide. As a social architect, he has curated the underground into public events from institutions such as the Brooklyn Academy of Music to a secret tree house art gallery he built in upstate NY. Though primarily nomadic, he sometimes resides outside of Kingston, NY.