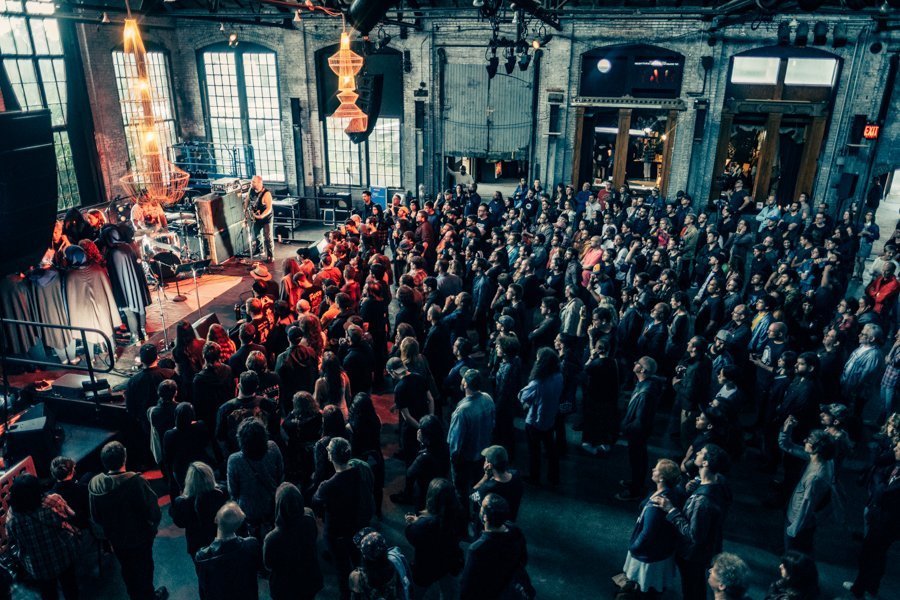 Let other music festivals have their haute-hippie selfies and front-to-back rock-album recitals. Basilica SoundScape can now lay claim to its very own poet trolley—an antique trolley car retrofitted to host readings, a new addition to this upstate arts summit. SoundScape, the flagship weekend for the Hudson, New York, performance venue, evinces a mind-set that’s at once bookish and noisy.
Jay Ruttenberg, New Yorker

Our old factory on the Hudson River is still ringing in sonic bliss from our eighth Basilica SoundScape. With hearts full and minds electrified, we are beyond grateful for the warmth and generosity of all those who shared their art and energies with us. From grindcore to an orchestral soundbath, and from floating sculpture to raw power poets, 2019’s Basilica SoundScape was a perfect, ramshackle example of our dreams of exchange and expression in our independent, not for profit industrial church! To all those who joined us, thank you for stepping off the beaten path to be with us. 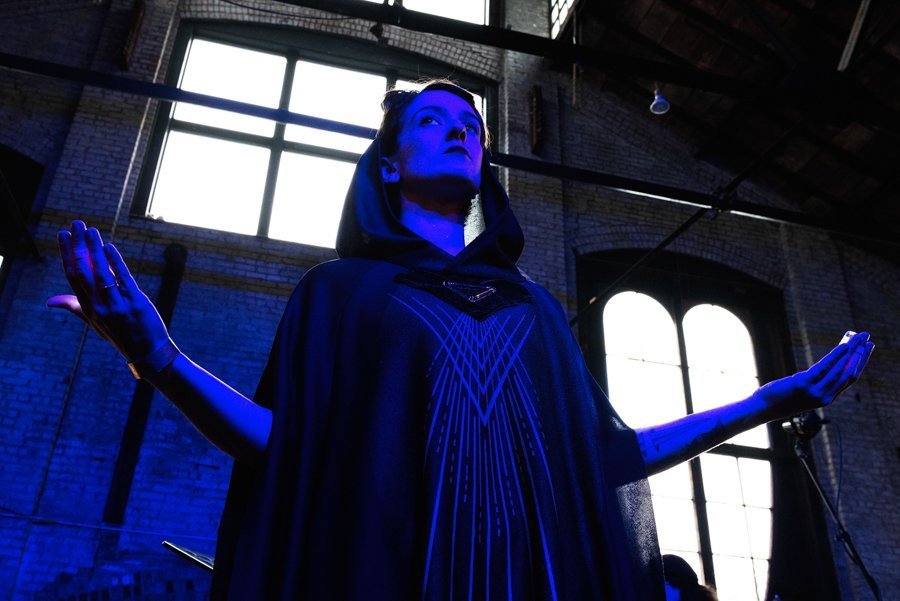 “It is the many many musicians and artists who have made SoundScape into something of its very own. The artists themselves jump off the usual touring paths, and often have to tell their agents that they are willing to take less pay to play something special. That leap of faith inspires and creates the generosity of spirit that is felt and captures our mission to be a platform for independent and innovative voices.”
Melissa Auf der Maur, Basilica Hudson Co-Founder and Director 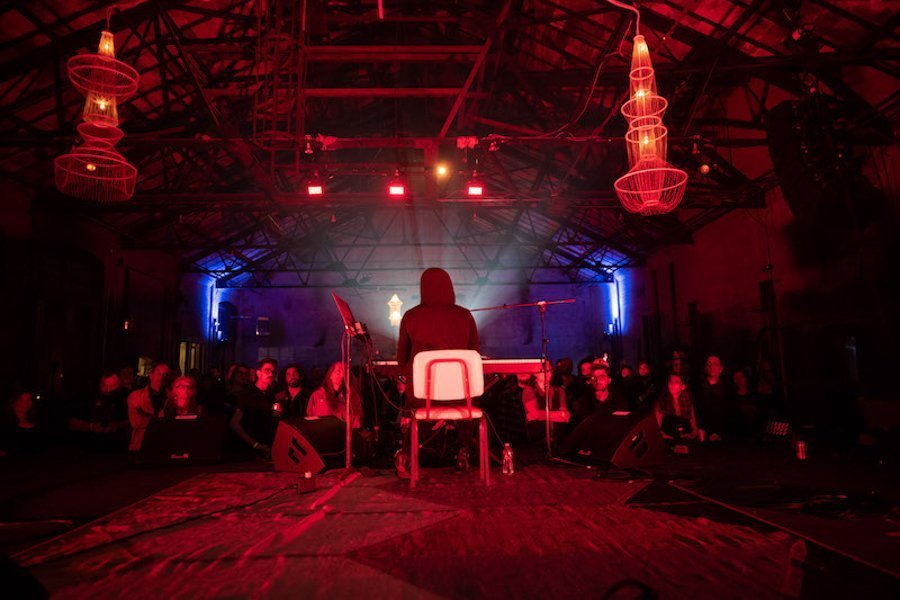 What a weekend and what an extraordinary space in which to make sound! I am always in search of holy rooms for sound and this is certainly one!
M Lamar, artist

Known for the diversity of its artfully curated programming, this three-day experience offers a viable alternative for those who dislike corporatized festival culture.
Olivia Horn, New York Times

“As a de-facto bookend to “festival season”, Soundscape has prided itself since its 2012 maiden voyage on being the antithesis of the American festival experience: Basilica Hudson’s co-founder Melissa Auf der Maur instead describes it as an “immersive pilgrimage to the Hudson Valley.” And indeed, with only two (and a half, if you count a stage tucked into the rafters) venues and no simultaneous music performances, the weekend’s schedule begets an emphasis on deep and careful listening and invites musicians who aren’t afraid of a bit of intimacy.”
Arielle Gordon, Brooklyn Vegan 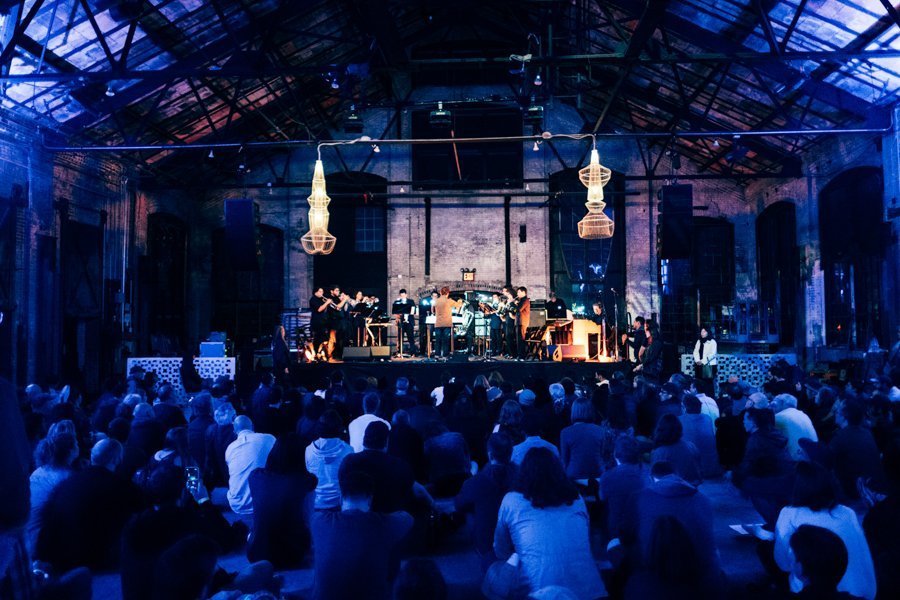 Basilica SoundScape 2019 was host to the North American premiere of Icelandic composer Johann Johannsson‘s Virdulegu Forsetar for large brass ensemble. Basilica SoundScape marked only the fourth time this major work has ever been performed live, and its inclusion in Basilica SoundScape made for one of the most profound and moving moments of the weekend. The piece was performed by members of Bard Conservatory Orchestra and was presented as part of ongoing international tribute concerts to Johannsson, who is known for his composition work on movies including Arrival, The Theory of Everything and Sicario and who passed away last year. Johannsson would have turned 50 in September. The presentation was curated and organized by composer/curator Matthew Patton (Those Who Walk Away). With special thanks to visiting curator Matthew Patton, Johann Johannsson Foundation and Consulate General of Iceland. 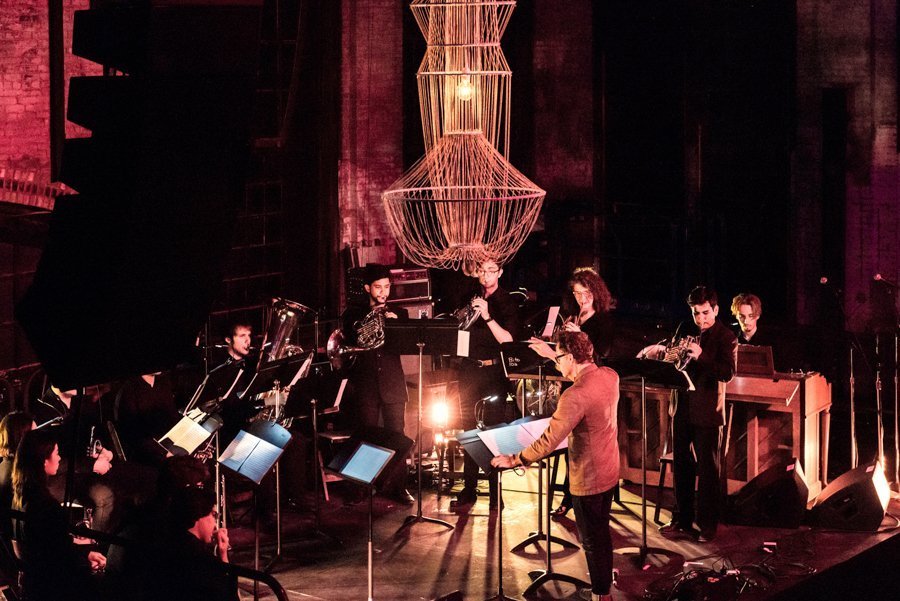 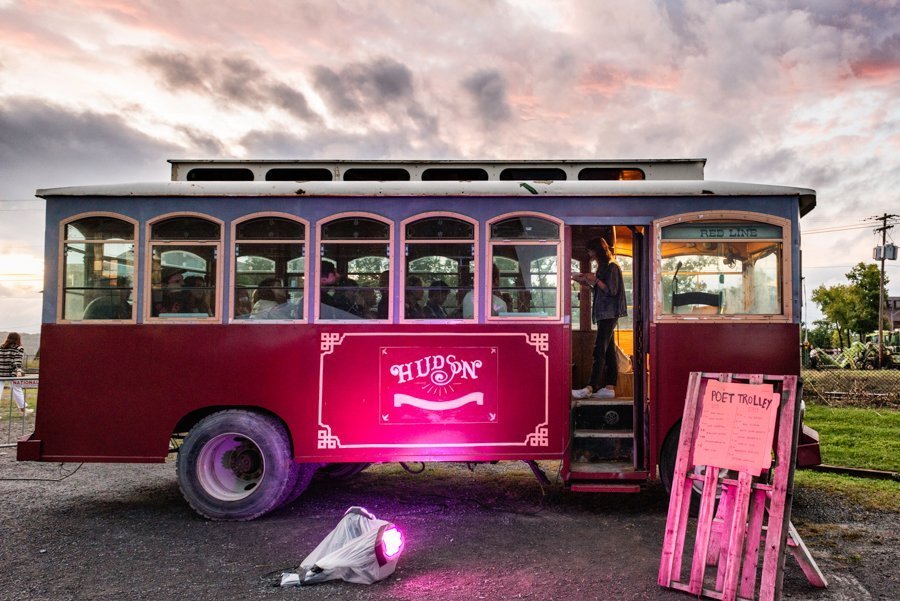 It was really a gift to get to be there, and I feel so inspired and so lucky. I was so moved by all the performances I saw, and reading my poems in the Poet Trolley is just something I will never forget.
Laura Henriksen, Poet Trolley reader

New for 2019, Basilica SoundScape hosted a bill of innovative poets and writers, who performed their work in the unique setting of a vintage Hudson trolley car. Huge thanks to Jenn Pelly for curating and performing, to The Creative Independent for supporting and to our neighbors at Cottage Treasures for the generous loan of the trolley itself.

Had one of the best weekends of my life at BSS this year, YET AGAIN! Such a joy to see so many friends and great performances. Thanks y’all!
Hether Fortune, Poet Trolley reader 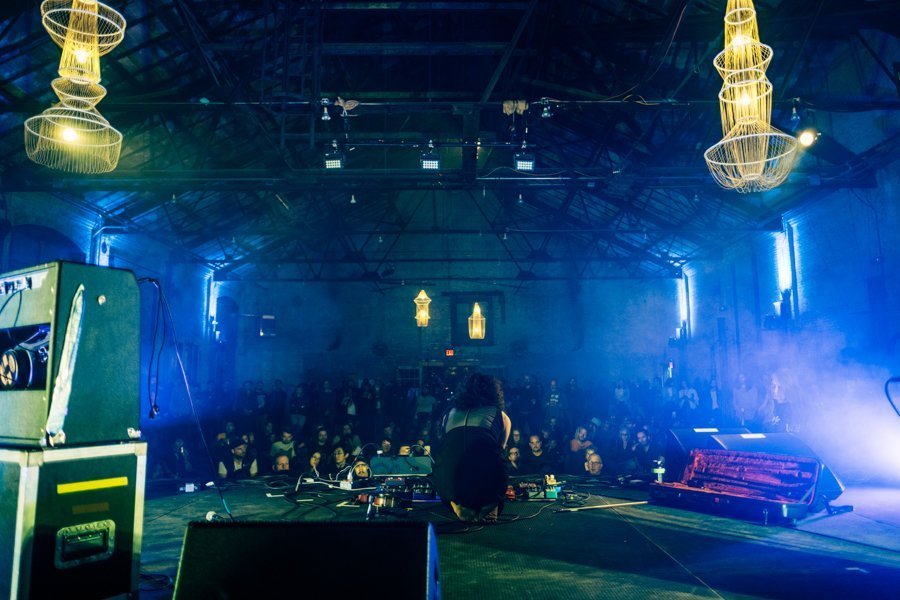 I truly appreciate you guys having me this year. I not only got a lot of positive feedback about the art that I had hung and new book that Sacred Bones just published, but on the variety of Zines, Books, Records, Prints, Etc. that I had brought from my distro. It all felt very much at home at a festival with such an eclectic roster of artists.
Sam Ryser, visual artist

Every year, Basilica SoundScape hosts a selection of visual artist whose work complements and enhances the weekend’s sound and music. For 2019, sculptor Austin Ballard pleated, draped and piled lampshades into cascading totemic forms suspended from the rafters in Basilica Hudson’s Main Hall – pictured above. With thanks to River Valley Arts Collective.

In the West Wing and entry, artist, musician and DIY underground veteran Sam Ryser presented his unmistakable visual aesthetic through a selection of his work crafted both within and outside of the music world, from custom wearable pieces to show posters and album artwork. Presented by Sacred Bones. 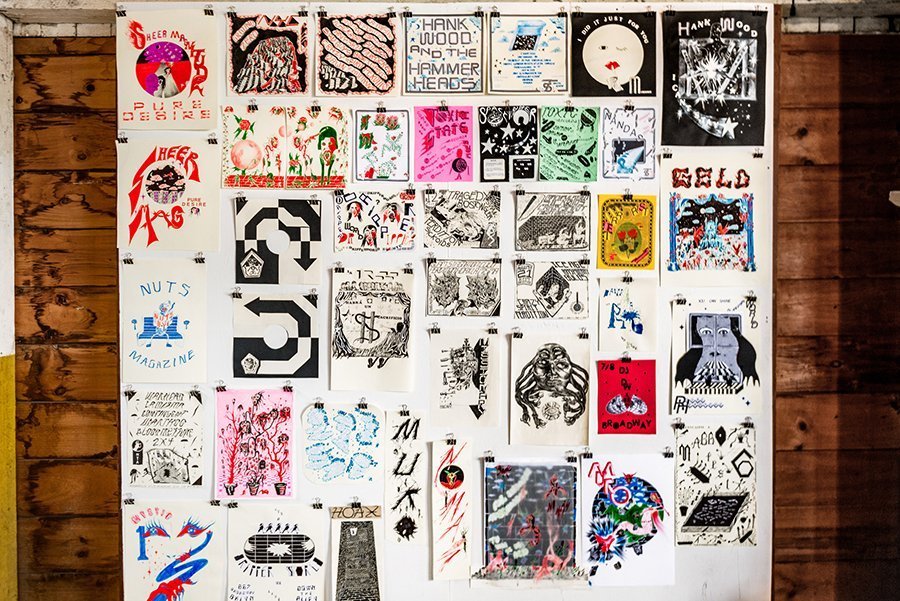 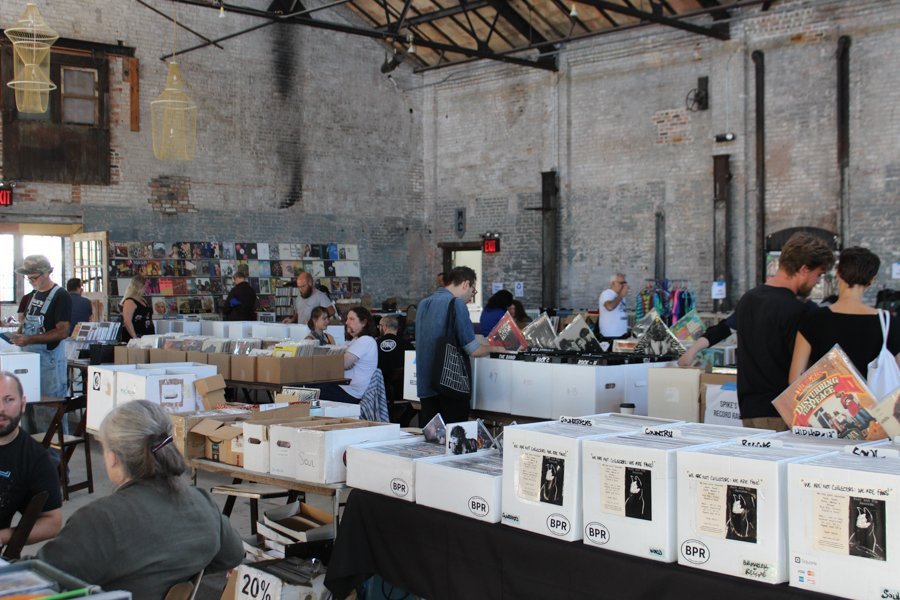 We were proud to close out our weekend with a truly multidisciplinary day of programming which paired performances curated by writers Joey de Jesus and Shanekia McIntosh with a Record Fair presented by and raising much-needed funds for Hudson’s Community Radio Station WGXC. 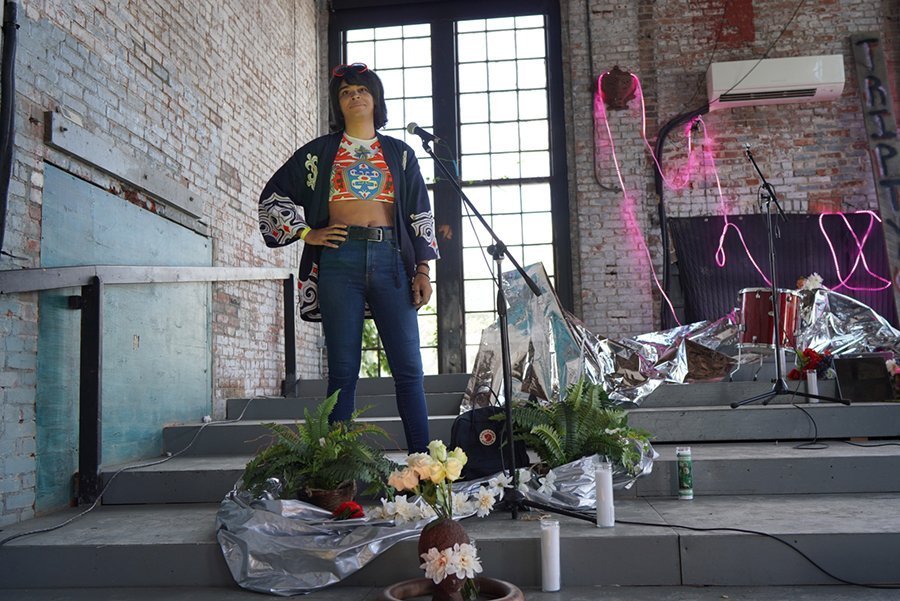 “An alternative culture ‘getaway’ away from the usual grid and platforms of presenting the art and music of our peers, in a reclaimed factory in a haunted small city on the rise. It seems like such an innocent dream now, and in light of the 8 years of trouble shooting, problem solving and life long friends and memories made – we are proud to see it still hold the same spirit, a steady stream of supporters and returning artists and attendees.”
Melissa Auf der Maur, Basilica Hudson Co-Founder and Director 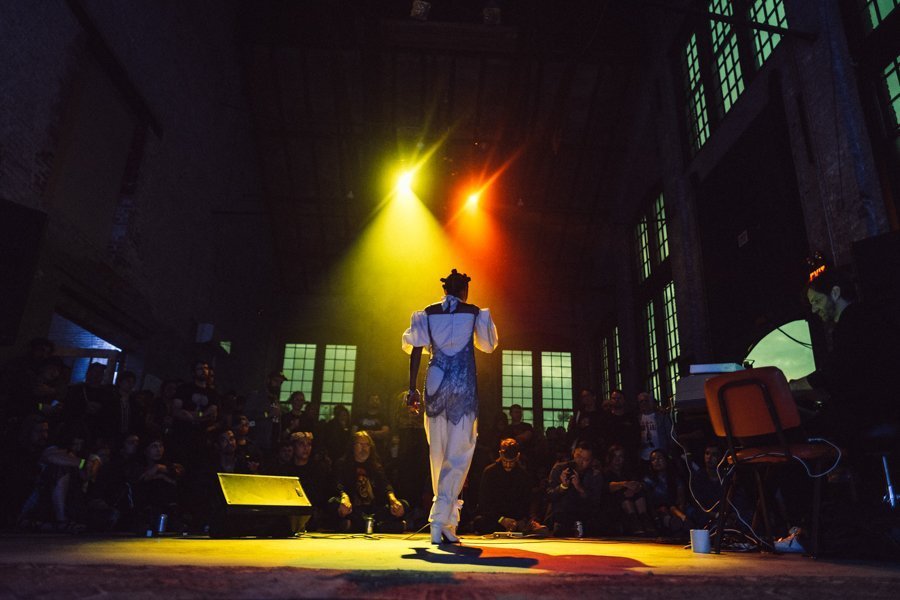 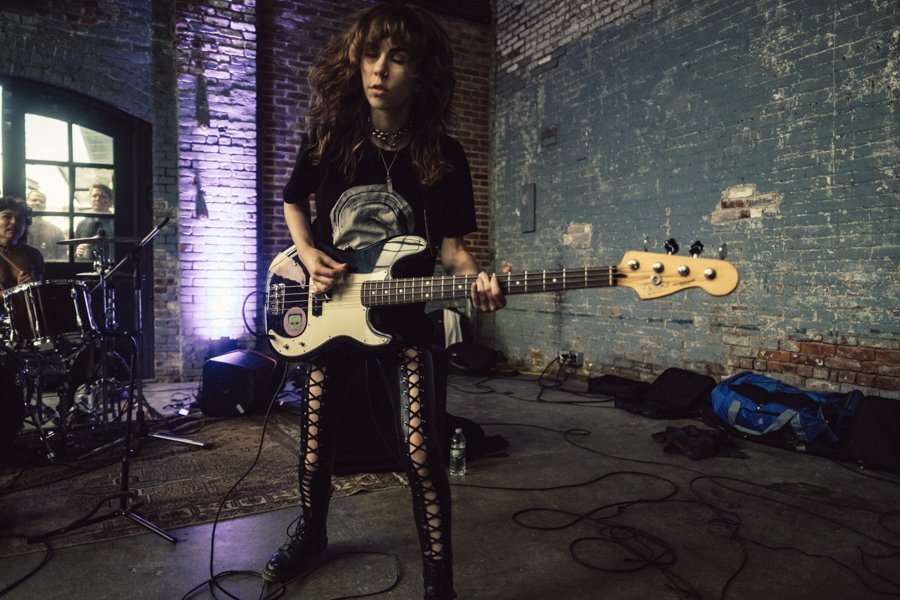 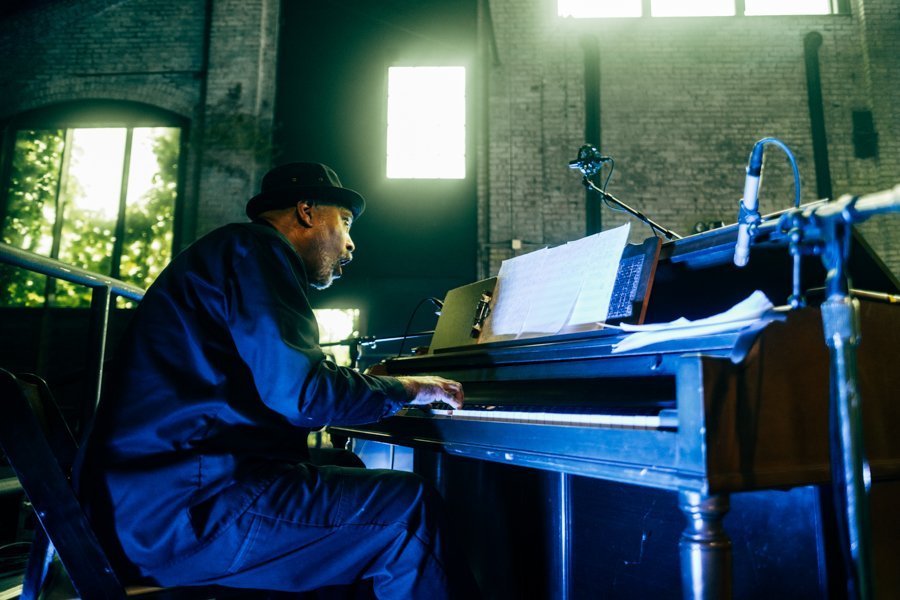 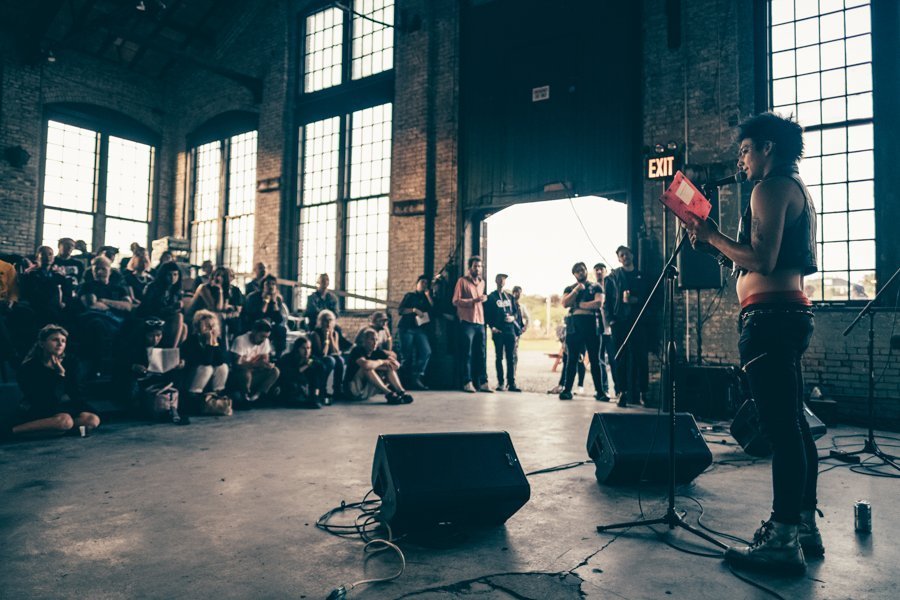 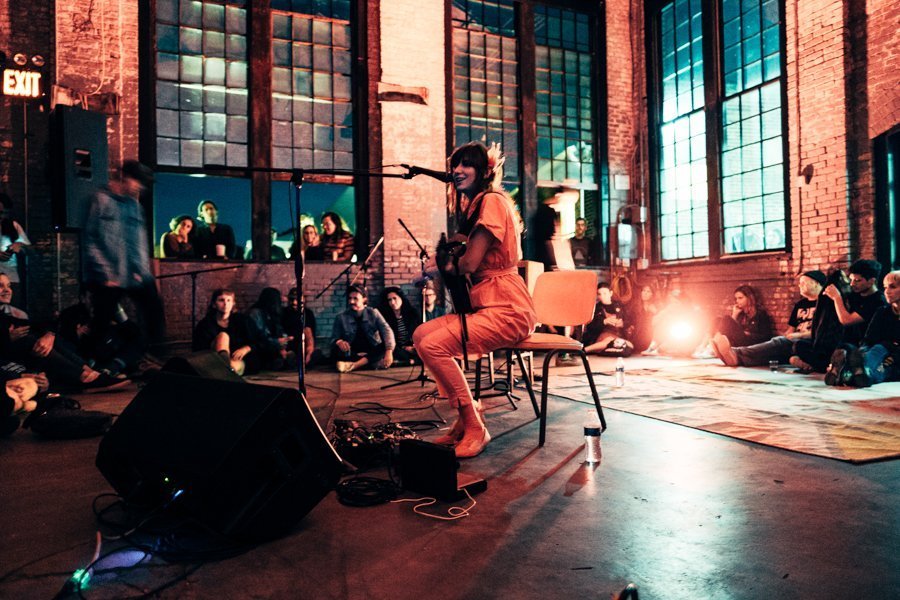 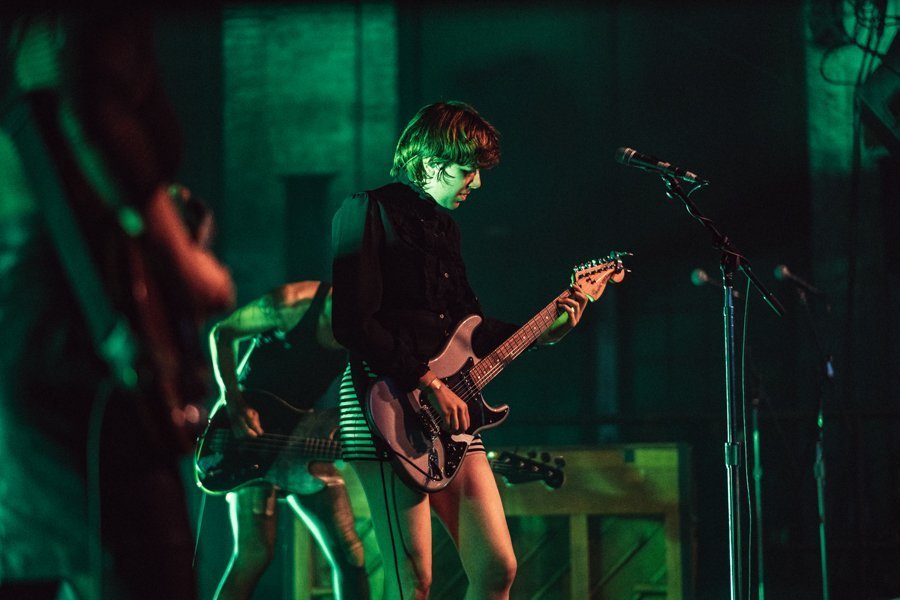 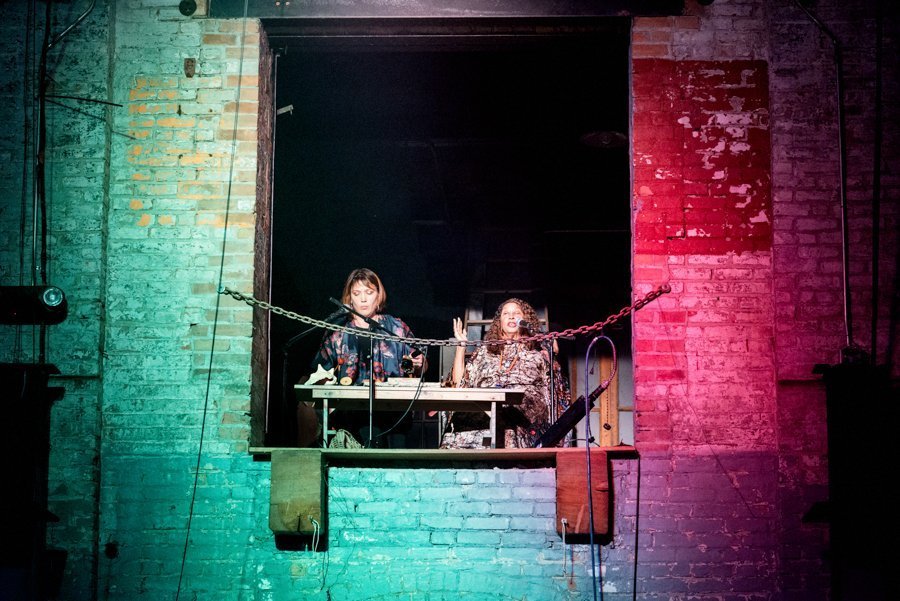 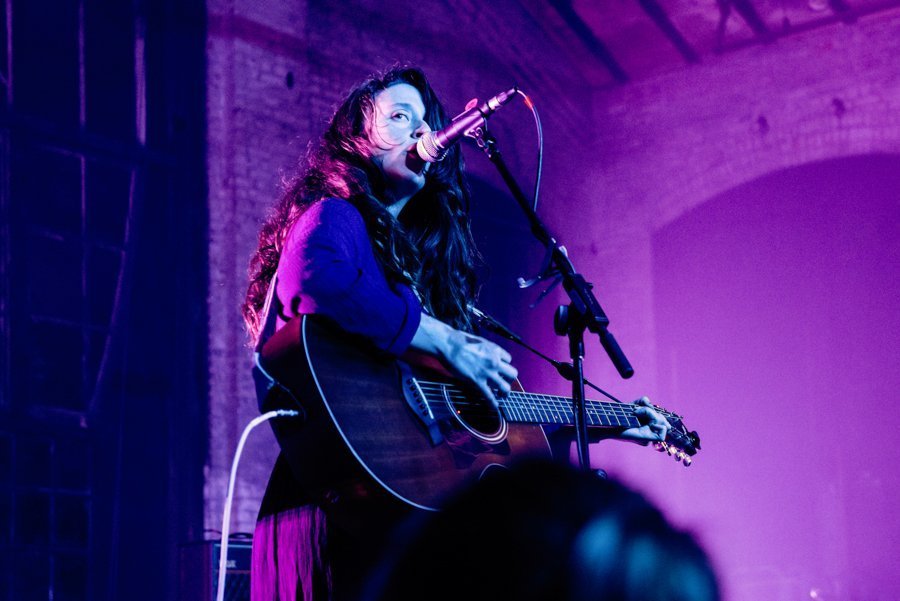 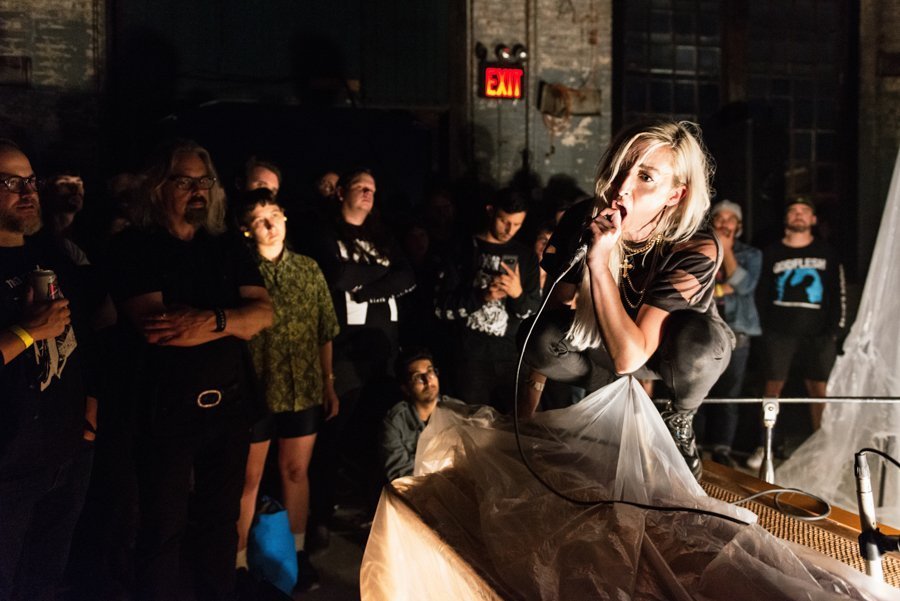 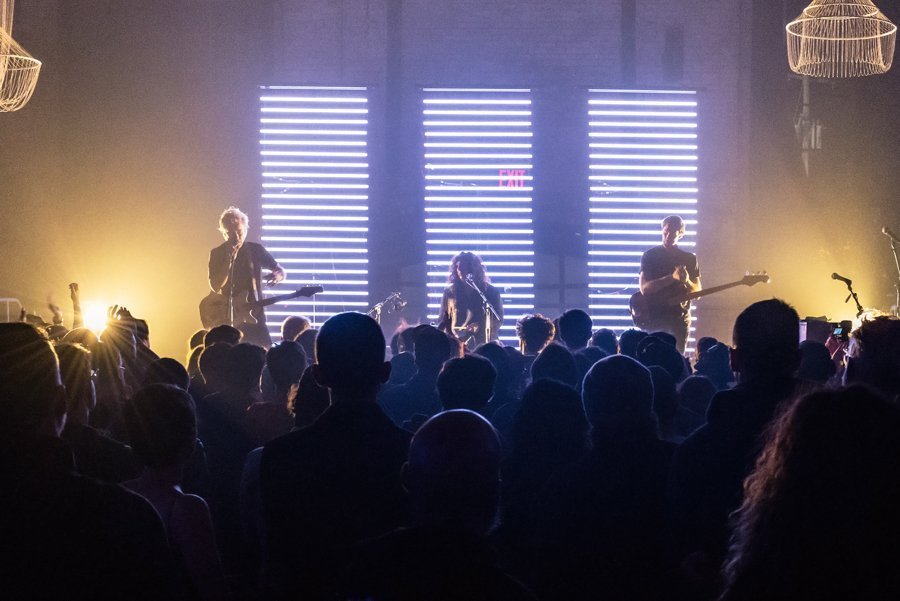 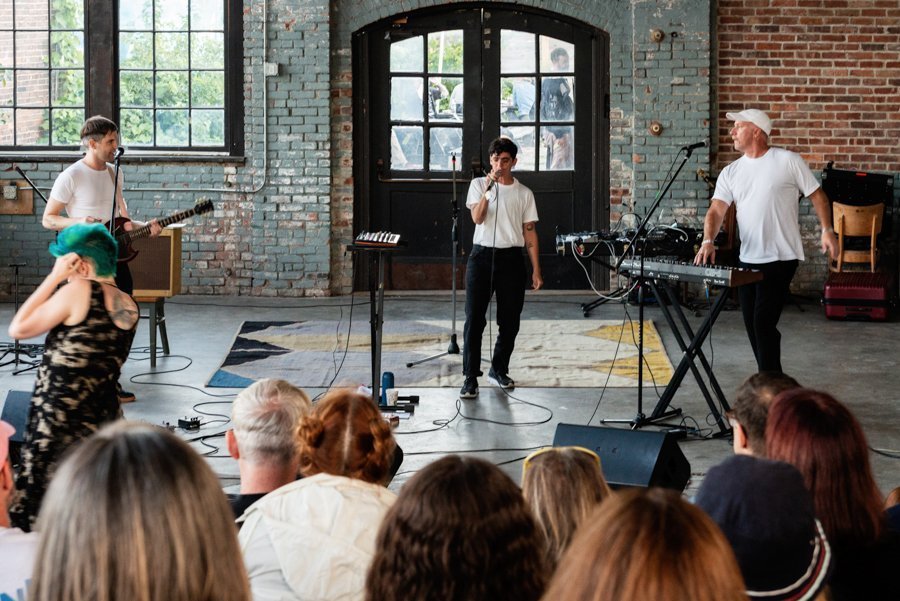 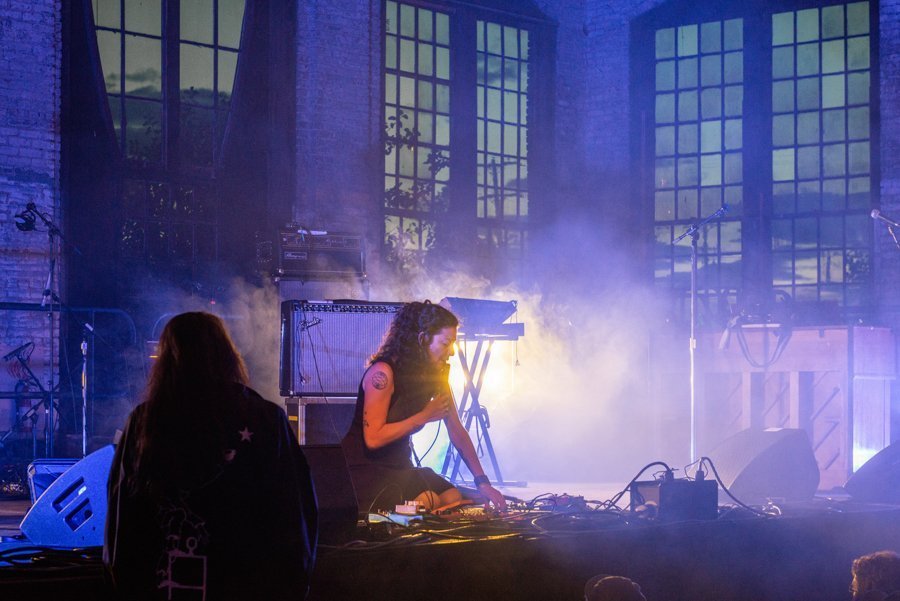 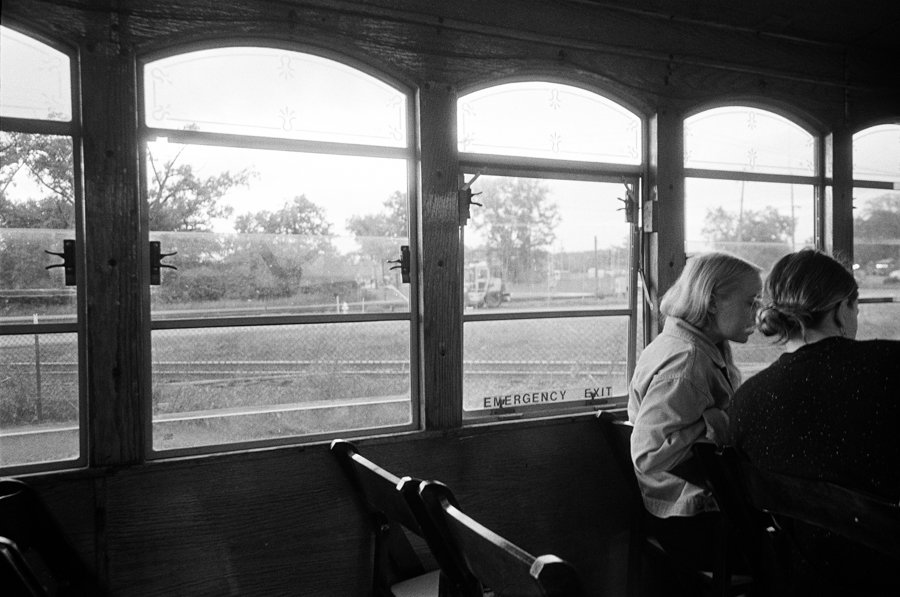 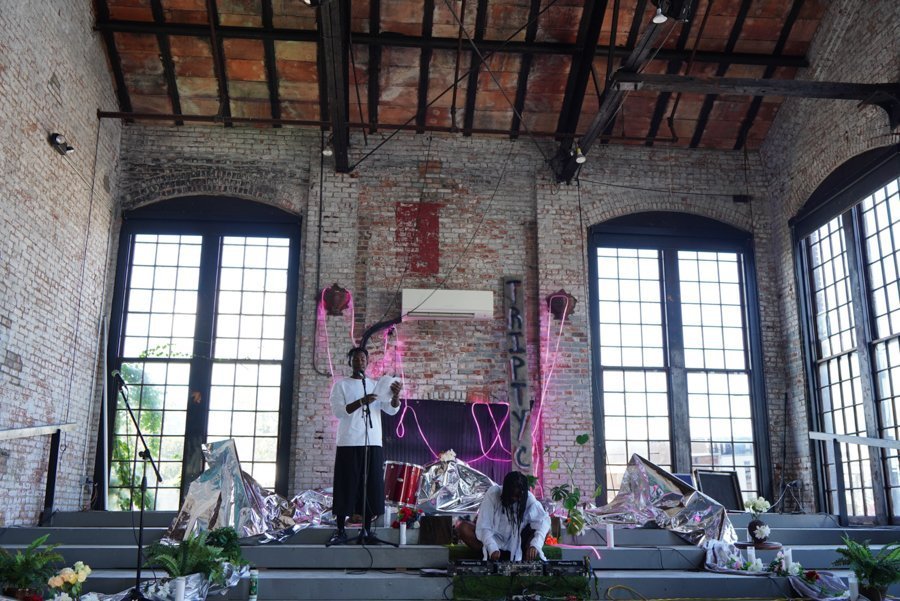 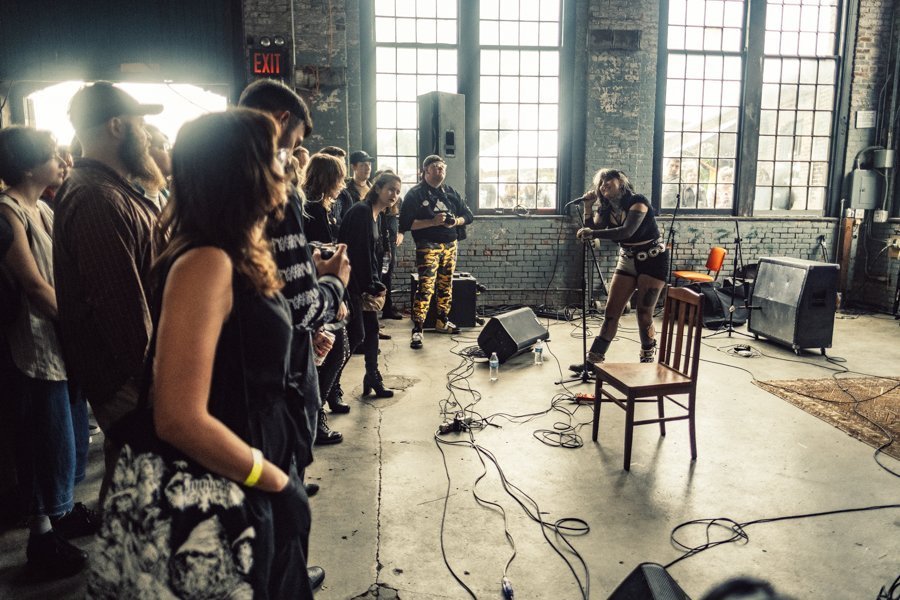 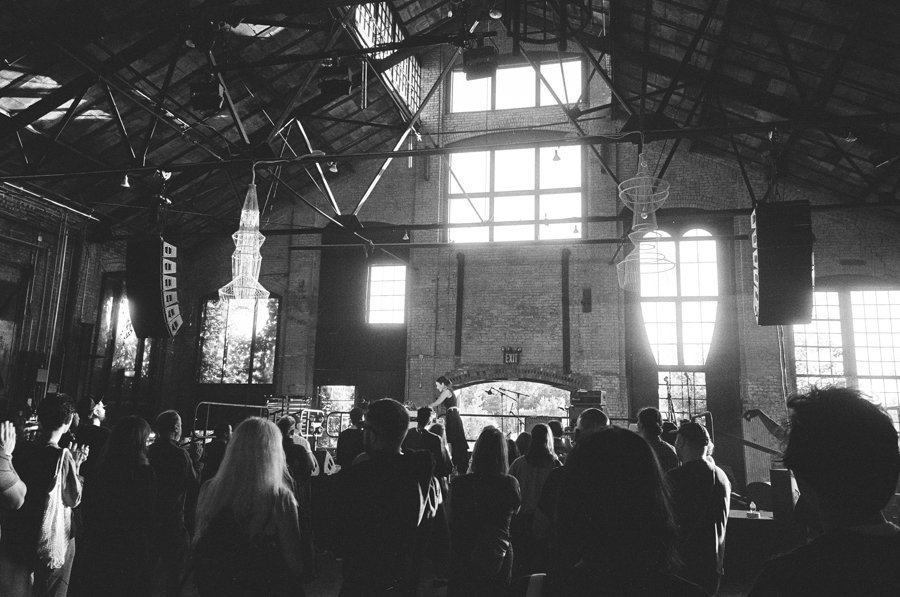 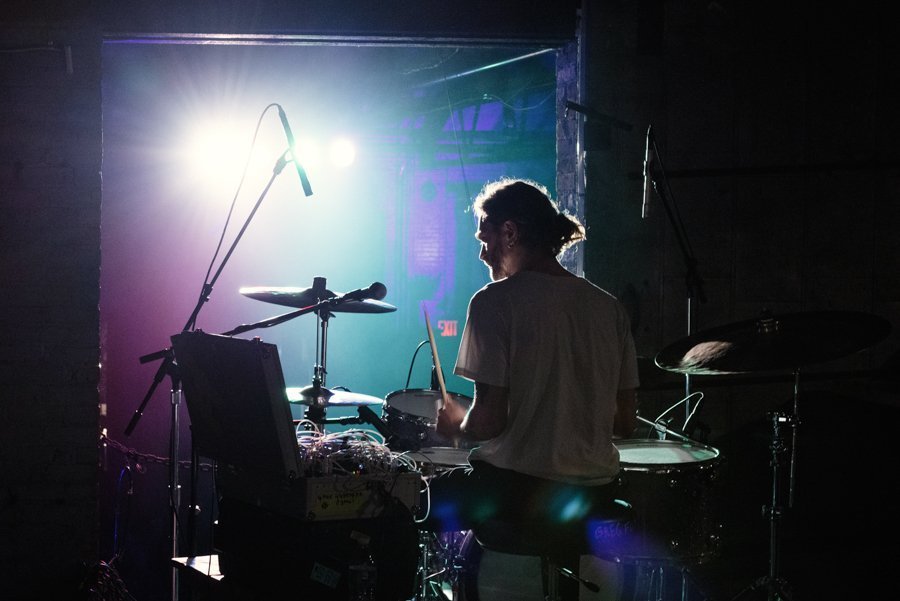 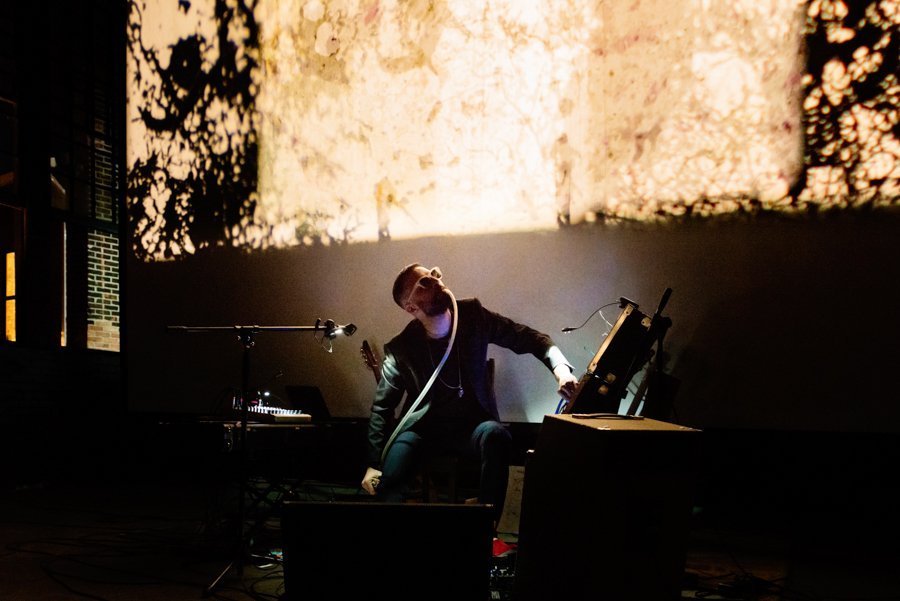 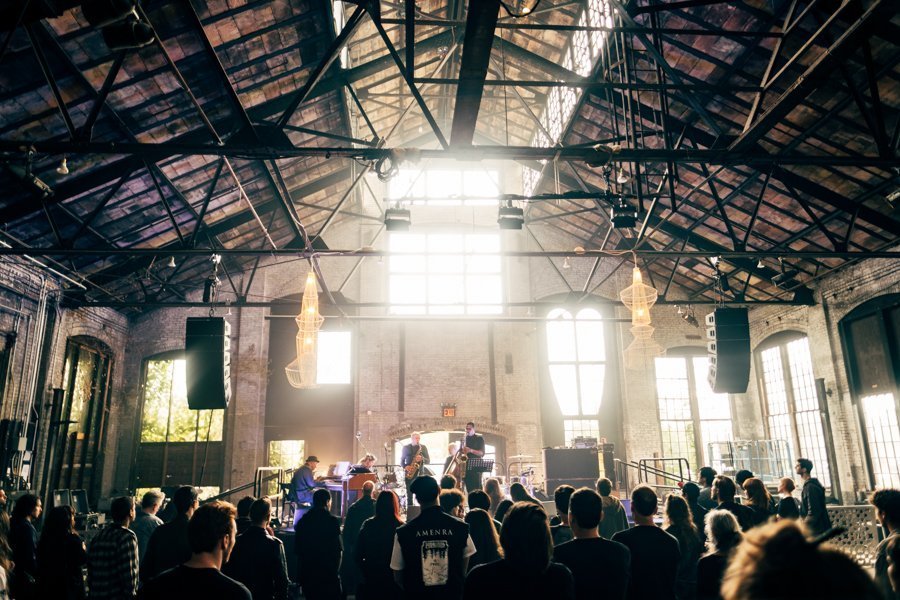 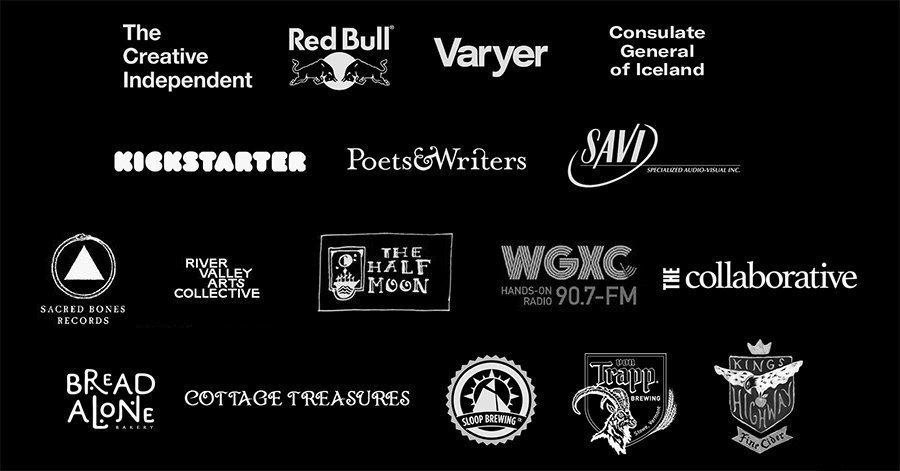