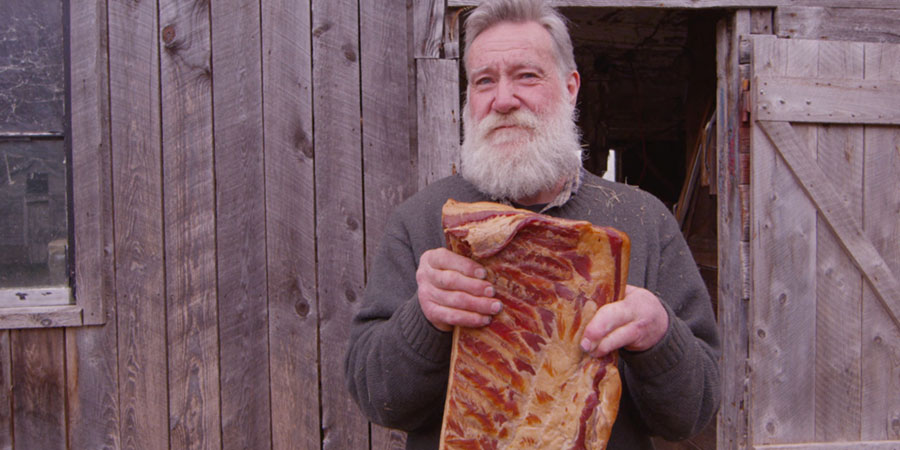 Following the premiere of Tony Stone’s 2016 documentary PETER AND THE FARM at True/False, Basilica Hudson co-founders Stone and Melissa Auf der Maur found a synergy of vision with the True/False mission and a collaboration was formed. Basilica Non-Fiction Film Series follows a similar model of a vibrant film festival in a small city surrounded by a rural landscape, attended by dedicated regional residents and national film enthusiasts.

Dig into the new trailer for PETER AND THE FARM!

Peter Dunning, the film’s incredible central character, will be in attendance with the film’s Director, Tony Stone, and Producer, Melissa Auf der Maur, together Co-Founders of Basilica Hudson.

Peter Dunning is a rugged individualist, an extreme, hard-drinking loner and a former artist. He has burned bridges with his wives and children; his only company, even on harsh winter nights, are the sheep, cows and pigs he tends on his Vermont farm. Peter is also one of the most complicated, sympathetic documentary subjects to come along in some time, a product of the 1960s counterculture whose poetic idealism has since soured. For all his candor, he slips into drunken self-destructive habits, cursing the splendors of a pastoral landscape that he has spent decades nurturing. Imbued with an aching tenderness, Tony Stone’s documentary is both haunting and heartbreaking, a mosaic of its singular subject’s transitory memories and reflections—however funny, tragic, or angry they may be.

Tony Stone is Co-Founder of Basilica Hudson. His first feature film, Severed Ways: The Norse Discovery of America, was released theatrically by Magnolia Pictures in 2009. Stone collaborated with Auf der Maur on the fantasy film, Out of Our Minds, which premiered at the 2009 Sundance Film Festival and was screened at the World Con’s 67th Annual Sci-Fi Convention. His debut documentary film, Peter and the Farm, premiered at the 2016 True/False film festival, was also screened at the 2016 New Directors/New Films festival, and will be released theatrically through Magnolia Pictures. He was born and raised in New York City and holds a BA in Film from Bard College.

For those of you in NYC, next weekend PETER AND THE FARM has its theatrical debut: Friday, November 4 at 7pm at the fantastic new cinema in Chinatown, Metrograph.
For those in Montreal, next month PETER AND THE FARM is showing November 13 & 14 at RIDM Film Festival.
PLUS, see PETER AND THE FARM at Film Columbia the day prior to our screening: Saturday, October 29 at 4pm, at the Crandell Theatre (48 Main St, Chatham, NY 12037).

Chris Boeckmann is a film programmer for the Columbia, MO-based True/False Film Fest and Ragtag Cinema. At True/False, he oversees the festival’s Neither/Nor sidebar, which brings documentary legends to mid-Missouri. And at Ragtag, he organizes free educational screenings with local nonprofit organizations. His writing has appeared in Film Comment and Filmmaker Magazine.

Now entering its fourteenth year, the True/False Film Fest honors outstanding work in the blossoming field of nonfiction cinema. True/False is a celebration of distinct filmmaking voices from all over the world and an opportunity to discuss and appreciate the ways in which documentary films are constructed. Taking place over one weekend in Columbia, Missouri, the fest is a non-fiction utopia, alive with enthusiasm for cinema, as festgoers pack screenings and even take part in a documentary parade. Focusing on collegiality and the connections between diverse filmmakers rather than on awards and honorifics, True/False fosters non-competitive camaraderie and an unhurried opportunity to view and discuss great films.

For More about our Basilica Non-Fiction Screenings, click HERE