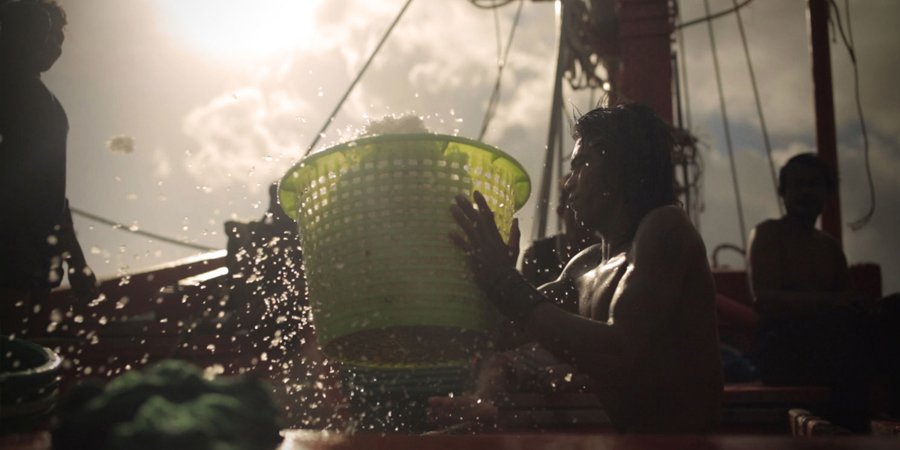 Ghost Fleet follows a small group of activists who risk their lives on remote Indonesian islands to find justice and freedom for the enslaved fishermen who feed the world’s insatiable appetite for seafood. Bangkok-based Patima Tungpuchayakul, a Thai abolitionist, has committed her life to helping these “lost” men return home. Facing illness, death threats, corruption and complacency, Patima’s fearless determination for justice inspires her nation and the world.

Thailand supplies a large portion of America’s seafood, but Thailand’s giant fishing fleet is chronically short tens of thousands of fishermen per year. Human traffickers have stepped in, selling captives from the region to the captains for a few hundred dollars each.

Once at sea, the men may never return to land – unless they escape. These boats work the islands of Indonesia and Thailand, but also off the coasts of West Africa and Europe. Attempts to “certify” where fish come from, and who is catching it, are in the works but are currently hit-and-miss. In the meantime, as fishing stocks are depleted and commercial fishing operations toiling under tighter and tighter budgets, the need for slave labor grows. Threats and punishments do too.

Next time you order a fish in a restaurant or buy it from a freezer at your local shop, ask yourself, who caught this fish?

“Ghost Fleet is a power-packed gut-punch that is both intense and infuriating, and is wholly deserving of Academy Award consideration.” – Mark Johnson, AWARDS CIRCUIT

“The underlying power of Ghost Fleet and what it reveals: that slavery still exists in certain parts of the world, with only a few people trying to fight it…Patima is a genuine hero.” – Jordan Mintzer, THE HOLLYWOOD REPORTER

ABOUT PRODUCER JON BOWERMASTER
A writer, filmmaker and adventurer, Jon is a six-time grantee of the National Geographic Expeditions Council. One of the Society’s ‘Ocean Heroes,’ his first assignment for National Geographic magazine in 1989 was to document a dog-sled expedition that crossed Antarctica taking 221 days. He is the founder of Oceans 8 Films and One Ocean Media Foundation. Listen to his podcast “The Green Radio Hour with Jon Bowermaster” on Radio Kingston.