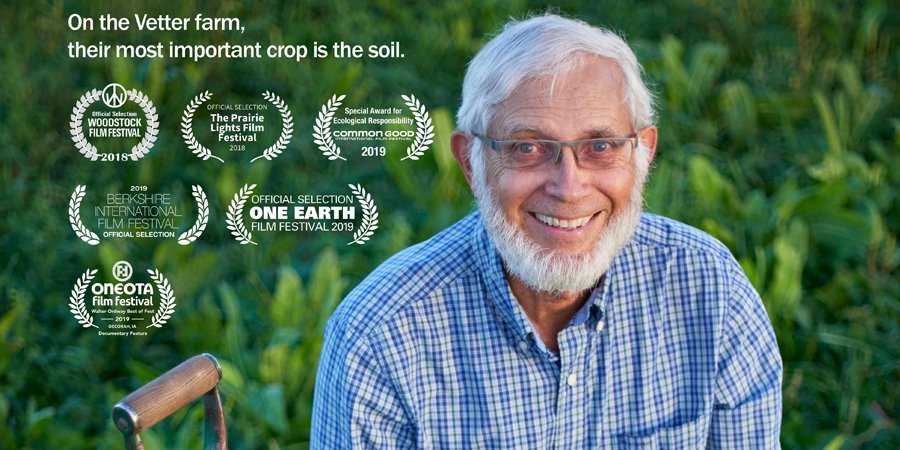 Followed by a Q & A with filmmaker Bonnie Hawthorne

On the Vetter farm, their most important crop is the soil.

DREAMING OF A VETTER WORLD TRAILER from MightyCanoe on Vimeo.

As part of Basilica Hudson’s Basilica Non-Fiction Screening Series, Berkshire International Film Festival will present a journey to the American heartland on August 29 with a FREE screening of Bonnie Hawthorne’s don’t-miss documentary Dreaming of a Vetter World.

Screened as part of Berkshire International Film Festival’s 2019 program, the film features one visionary Nebraska farm family who understood that modern agriculture was ailing, and found a cure. From farmer’s son to soil scientist to missionary and back to farmer again, organic pioneer David Vetter has dedicated his life to a “ministry to the soil.” With camera and camper in tow, Hawthorne leaves her urban comforts in the rear view mirror to learn from the Vetters about what’s really going on in the Corn Belt. As interest in regenerating soil explodes worldwide, Hawthorne discovers that David Vetter is way ahead of the game. With both historical context and an eye to the future, Dreaming of a Vetter World shows it’s possible to jump off conventional agriculture’s pesticide treadmill. It’s also a story about love, hope and place; an inspiring example of perseverance and doing what you know is right–against all odds.
  
One day in 1953, Nebraska farmer Donald Vetter had an epiphany while spraying his cornfield. He’d wondered for a while about the wartime chemicals–now approved for agricultural use–he was spraying on his crops. Disappointed with the results, he’d also noticed these chemicals stripped the goodness from the soil and killed wildlife. And what were they doing to the food itself? He decided right then and there that he wasn’t going spray anymore.

Dreaming of a Vetter World comes at a time when interest in farming organically and regenerating soil has exploded worldwide. Others are realizing what the Vetters have known for decades: eating food grown with pesticides is bad for us; and soil is key to our very survival. That’s why, on the Vetter farm, their most important “crop” is the soil.

With camera and camper in tow, Director Bonnie Hawthorne leaves her urban comforts in the rear view mirror to learn from the Vetters about what’s really going on in our food system. Her debut feature-length documentary shares the struggles the Vetters face as “Big Ag”–chemical agriculture–encroaches.

Informative yet entertaining, the film features the self-sustaining, self- renewing farm-management experiment Donald and David Vetter created back in the 1970s. As the Vetters try to stay one step ahead of changing weather patterns, market fluctuations and the ever-increasing pesticide use around them, their experiment to regenerate soil through organic methods continues. With both historical context and an eye to the future, Dreaming of a Vetter World shows it’s possible to jump off the pesticide treadmill. It’s also a story about love, hope, family, and place; an inspiring example of perseverance and doing what you know is right–against all odds.

 Haven’t there already been a lot of films made about food and agriculture?
Yes. Also, we are currently up to Sharknado 6. If the world can bear SIX feature films about tornados that rain sharks, don’t you think it can stand a few thousand documentaries on what is arguably the most important topic of our time? As one farmer I met said, “Without food, you don’t have much to hang human civilization on.”

This film features smart, funny, warm, dedicated people doing what they know is right regardless of whether it makes them money. As Donald Vetter says, “I don’t want to be a braggart and go to town and say I raised 300 bushel of corn on this acre at the expense of the land and of future generations. To me, that’s wrong. And if you think it’s wrong, you don’t do it.” – Bonnie Hawthorne, filmmaker

QUOTES
“Here is what happens when vision triumphs over industrial agriculture and industrial movie production. Bravo on both counts.” Alan Lewis, Director of Food and Agriculture Policy, Natural Grocers

“An insightful and moving portrait of one of the keystone farms in the organic food movement, this film digs deep into the life of a midwestern farm community, revealing just how much is at stake in one family’s courageous campaign to replace chemical farming with a more ecological alternative.” Liz Carlisle, author of The Lentil Underground: Renegade Farmers and the Future of Food in America

“It’s a story of exploitation, a story of injustice, and a story about a solution to a multitude of what ails us. I truly want to help audiences SEE the far reaching benefits of what Dave is doing, and the policy solutions to what prevents many more farmers from following in his footsteps.” Melinda Hemmelgarn, M.S., R.D. Host, Food Sleuth Radio
   
Bonnie Hawthorne is the director, cinematographer, editor, writer and narrator of Dreaming of a Vetter World. While a film student at NYU in the 1980s, her documentary teacher said there would come a day when one woman could go AWOL from her day job cutting television shows, take off in a tiny camper and make a film with cameras small enough to fit in a purse. That day finally arrived. This film—her first—is the result. Her neighbors back in those NYU days were Jo Andres and Steve Buscemi. They are Executive Producers on this film, along with Bobby Houston, who gave Bonnie her first feature film job.