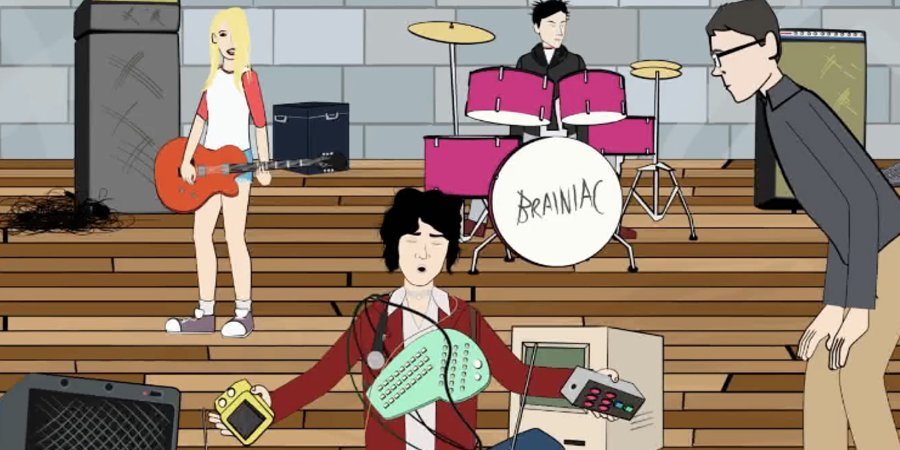 The Basilica Non-Fiction Screening Series will launch on May 30 with a screening of filmmaker Eric Mahoney‘s vibrant, explosive music documentary Brainiac: Transmissions After Zero, with Mahoney in conversation following the screening.

I miss you. I think about you often. In my 25 full time years devoted to making music the center of my life, I’ve met so many people doing the same. However very few eclipse the impact your band made on my life, and when you did. It is so much more than vivid memories. You are a symbol of a dream and an explosive energy that meant everything to me then, and still now. I seek that quality in people everyday in all I do. People who are just who they are, not trying to be anyone else, just trying hard to find the tools to be more of themselves.

In the mid 90’s the Dayton, OH music scene became a hot spot generating world wide buzz from the influential indie rock being produced there (The Breeders, Guided by Voices). Arguably the most innovative of them all was the band Brainiac, led by musical genius and insanely charismatic front man Tim Taylor. The band was opening for Beck and being courted by major labels when Tim was tragically killed in a bizarre auto accident leaving his family and bandmates to pick up the pieces. This film explores the band’s music, legacy, massive influence on pop culture and how people survive and cope with the loss of loved ones.

ABOUT BASILICA NON-FICTION SCREENING SERIES
Brainiac marks the return of Basilica Hudson’s Basilica Non-Fiction Screening Series, which explores the documentary genre through screenings and dialogue with visiting directors. Now in its third year, the series was developed in partnership with Chris Boekmann of Colombia MO’s acclaimed True/False Film Fest.

DIRECTOR STATEMENT
In the 90’s growing up as an aspiring musician in the small town of Dayton, OH I was completely and totally enthralled with Brainiac. Their originality, creativity and utter coolness caused me to become a full time student of their work, studying every move and clocking their rapid ascent. When Tim Taylor passed away in the spring of 1997 it left a void in his fans around the world and also a massive hole in the heart of the Dayton community.

In the fall of 2016, after wrapping up a massive anthology film project, I began thinking about the band’s story and that 2017 would be the 20th anniversary of Tim’s death. I was fascinated by the slew of musicians who had since cited Brainiac as an influence (Trent Reznor, Cedric Bixler- Zavala, The National, etc) and also how the surviving members had all taken different paths after their lives did a complete 180 degree turn overnight in the spring of ‘97.

For the last two years my partner Ian Jacobs and I have been on a journey that has been emotionally, financially and at times physically draining trying to do justice and create an artful and heartfelt tribute to a massively influential group of musical geniuses. This process has also been a source of healing for both the band and Taylor family which has made the journey not only creatively satisfying but personally gratifying as well.

Eric Mahoney is a Brooklyn based director, producer and musician whose debut documentary, North Dixie Drive was called, “A perfect cinematic piece of cultural anthropology” by director Jim Jarmusch. His last release, Madly, an international anthology film premiered and won Best Actress at the 2016 Tribeca Film Festival. Other works from Mahoney have screened at Cannes, Melbourne, Mumbai and numerous other international film festivals.

Ian Jacobs is a video editor and musician living in New York City. He writes and performs music under the moniker Monograms, while his editorial cuts and credits have aired on VICELAND, Travel Channel, MTV, VH1, Comedy Central and Discovery Channel.

« Basilica Back Gallery Artist In Residence Series: Zia Anger
Neither Confirm Nor Deny »