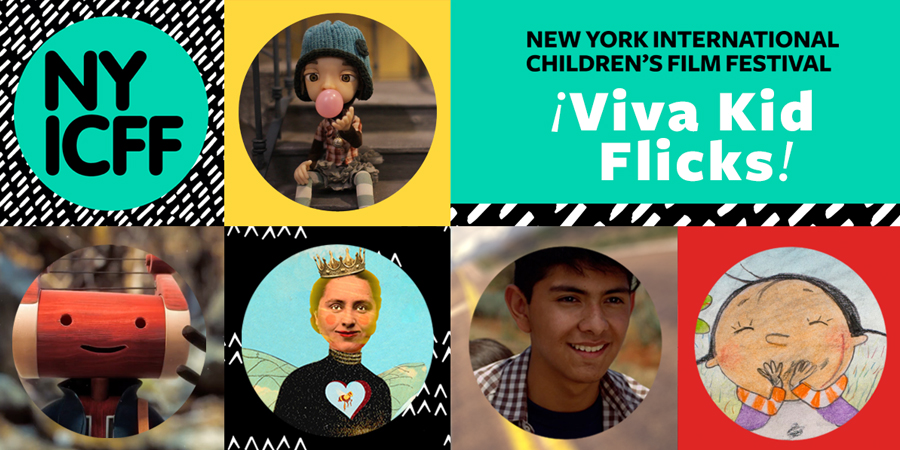 On select monthly summer Sundays, Basilica Hudson will be screening the Kid Flicks Tour – the best short films from the 2018 New York International Children’s Film Festival! All matinee screenings will be open to the public and FREE to attend

A new Spanish-language program of animated, documentary, and live action films full of warmth, wit, and the cultural richness of our friends and neighbors to the south: Mexico. Drawn from the Festival’s annual Friends and Neighbors program spotlighting a different country every year, this lineup is co-curated with Mexico’s Morelia International Film Festival. All films are in Spanish with English subtitles or no dialogue, perfect for Spanish learners, speakers, and all seekers of fun, artistic, and enriching cultural experiences, ages 7+.

THE PIÑATA KING
UK, Documentary
Charlie Kwai, Chris Lee & Paul Storrie, 2017, 3 min
Spanish with English subtitles
Over 50 years ago, on the outskirts of Mexico City, a family began making and selling piñatas to the local community. Now, the whole town takes part in the tradition, as this colorful documentary demonstrates.

BZZZ
Mexico, Animation
Anna Cetti, 2017, 4 min
A little girl recognizes that buzz and hum are essential to all life in this cross-pollinating tale.

CREATIVITY DOES NOT RECOGNIZE WALLS / ​LA CREATIVIDAD NO RECONOCE MUROS
Mexico, Animation
Fernando Campos, 2017, 2 min
Art knows no boundaries, as this lovely animation commissioned by the Pixelatl Festival seeks to show us.

A HOLE / EL AGUJERO
Mexico, Animation
Maribel Suarez, 2016, 5 min
In Spanish with English subtitles
A little girl longs for a playmate in the garden. Her efforts go unnoticed—until they finally take root.

ELENA AND THE SHADOWS / ELENA Y LAS SOMBRAS
Mexico, Live Action
César Cepeda, 2016, 7 min
 Elena’s old neighborhood is empty and lonely until Félix enters her orbit and shows her how to access other universes.

FAR FROM HOME / LEJOS DE CASA
Mexico, Live Action
Mayra Veliz, 2016, 13 min
In Spanish with English subtitles
Risa is a Japanese teenager on a visit to Mexico. When she ends up lost in a restaurant in the middle of nowhere, a local boy tries to help her find her way.

LUCY VS. THE LIMITS OF VOICE / LUCY CONTRA LAS LIMITES DE VOZ
Mexico, Live Action
Mónica Herrera, 2012, 10 min
In Spanish with English subtitles
Lucy wonders if each person is born with a fixed number of words to expend in their lifetime and if that could be the reason why her grandpa stopped talking.

RAIN IN THE EYES / LLUVIA EN LOS OJOS
Mexico, Animation
Rita Basulto, 2013, 9 min
In this fantastical story set amidst hides tough and tender, seven-year-old Sofía recalls the day she fractured her arm while being chased through the forest.

The Sunday Matinee Kid Flicks Series is part of Watch + Talk, a new free series focused on introducing young audiences to the power of film. Watch + Talk is supported by a grant from the Fund for Columbia County, a fund of Berkshire Taconic Community Foundation.