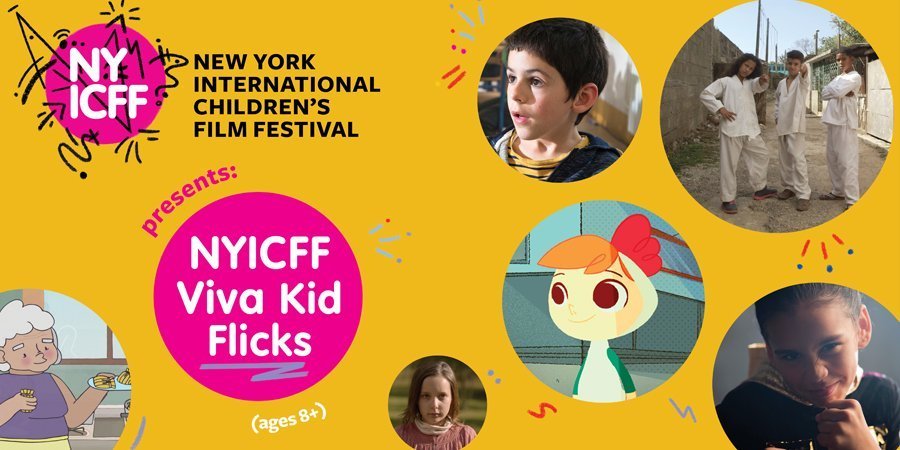 NYICFF Viva Kid Flicks celebrates Spanish-language and Latino-themed stories in shorts from around the globe.

Can a fabled stone offer another path for Matilde’s life on her Mexican ​rancho?​ ​ And the choices we make at mealtime sometimes have a very big impact, especially for a seemingly picky eater with a lot more on his mind in the drama from Spain,​ Fish​. The universal language of wizards bridges cultures from the UK to Cuba in the imaginative doc ​Spelliasmous​.
You’ll experience moving stories and hear how around the world, Spanish stories have their own distinctive flair.

This screening will be part of a regular series of free Sunday afternoon matinee movie screenings, which will also include Kid Flicks 1 (ages 3-7) on Sunday, July 28 and Kid Flicks 2 (ages 8+) on Sunday, August 4.

GINA
Mexico, Animation
David Diomedes Heras, 2018
Dancing ​son jarocho ​has been Gina’s dream since she was born, but stuck wearing a chicken suit she can’t take off, she’ll have to shake more than just her tail feathers to reach the top.

STARDUST
Mexico, ​Live Action
Aldo Sotelo Lázaro, 2017, 14 min
One young man realizes that no matter how humble his surroundings, he can still find a path to reach for the stars.

JESSZILLA
USA, ​Documentary
Emily Sheskin, 2017, 7 min
A pugilist-in-training, Jess has big boxing aspirations, while her father worries and supports her in one-two alternations of his own.

MI ABUELITA
Guatemala, Animation
Giselle Pérez, 2018, 2 min
Like everything Abuelita does, her tamales are filled with love, especially when her granddaughter gets to help out in the kitchen.

FISH
Spain, Live Action
Javier Quintas, 2017, 10 min
The choices we make at mealtime sometimes have a very big impact for a seemingly picky eater with a lot more on his mind.