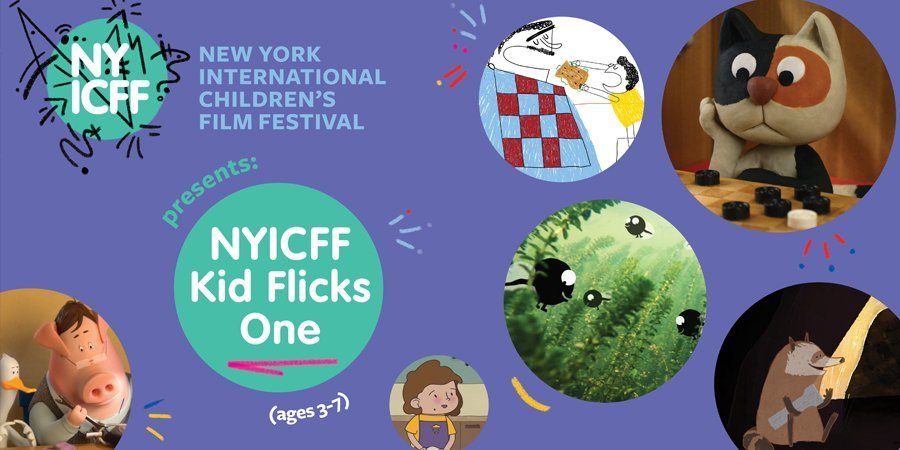 Bigger, brighter, bolder — change is in the air in NYICFF Kid Flicks 1, brimming with fun and clever stories of growth and transformation.

If you’ve ever been the youngest of the group, you’ll sympathize with the little tadpole who always falls a tad behind in the charming ​KUAP​. Catching up on penmanship is the name of the game if you want to graduate from pencils in the winning doc ​Pen Licence​. Then little ones are in charge and grown-ups get to play when the hilarious ​Flipped​ reworks the script.

BELLY FLOP
South Africa, Animation
Jeremy Collins, Kelly Dillon, 2018, 5 min
One girl is determined to make a very big splash, but will she have the buoyant courage to pull it off?

SMALL SPARK
France, Animation
Animation, Nicolas Bianco-Levrin, 2019, 4 min
You’ve heard of night owls and bookworms? Well both perfectly describe this mouse, who must find a way to continue his exciting bedtime reading when it’s lights out.

KUAP
Switzerland, Animation
Nils Hedinger, 2018, 7 min
If you’ve ever been the youngest of the group, you’ll sympathize with the little tadpole who always falls a tad behind in the charming ​KUAP​.

PIG ON THE HILL
USA, Animation
Jamy Wheless & John Helms; 2017, 6 min.
Pig may be up high, but his nimble new neighbor, Duck, shows how the most important spot of all is one next to friends.

PEN LICENSE
Australia, Documentary
Documentary, Olivia Peniston-Bird, 2018, 9 min
Brushing up on penmanship is the name of the game if you want to graduate from pencils.

6:1
Russia, Animation,
Sergei Ryabov, 2018, 3 min
Checkers may seem a game of child’s play, but can a losing cat nab a comeback?

FLIPPED
United Kingdom, Animation
Hend Esmat & Lamiaa Diab, 2018, 5 min
Little ones are in charge and grown-ups get to play when the hilarious ​Flipped r​ eworks the script.

MI ABUELITA
Guatemala, Animation
Giselle Pérez, 2018, 2 min
Like everything Abuelita does, her tamales are filled with love, especially when her granddaughter gets to help out in the kitchen.

BROOKLYN BREEZE
COLOMBIA, Animation
Alex Budovsky, 2017, 4 min
NYC’s biggest borough gets the Busby Berkeley treatment in this charmingly upbeat ode to industrial Brooklyn that will have you tapping your steel-capped toes!

RACCOON & THE LIGHT
USA, Animation
Hanna Kim, 2018, 4 min
Nighttime is a breeze for a nocturnal creature, but a spotlight shines in more ways than one in this Student Academy Award-Winner.