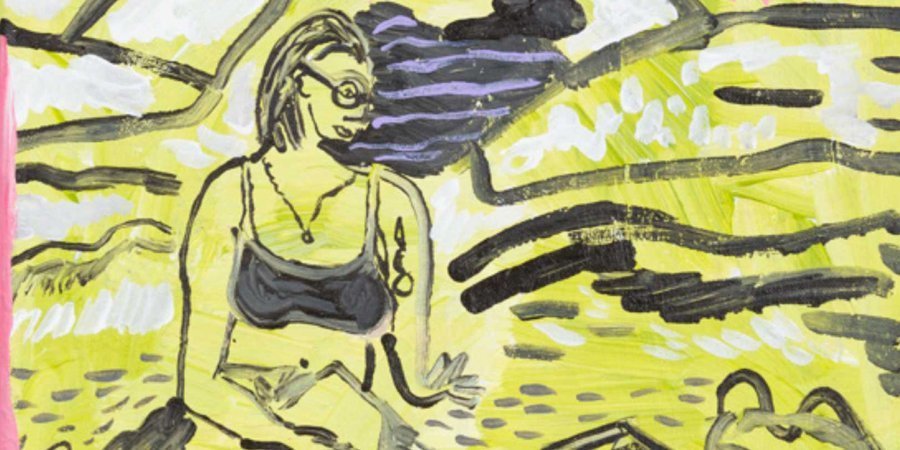 Sonia Corina Ruscoe is a painter raised in the Hudson Valley and now based in Hudson, NY by way of a loop around NYC. With her solo show ~*~*~Water Chestnuts~*~*~, she will present a series of large canvases, created during a period in residence in Basilica’s Back Gallery.

During her residency, Sonia will structure her days around early mornings, large canvases to work on, and periodic walks along the river throughout the day to fish out the treasures at the banks. She will paint the plant life straightforwardly, abstractly examining our small city and human needs as they relate to the wet smell of our river, the taste of chestnut flour baked into a cake (literally) and the blissful melancholy of living alongside a polluted living body.

Working with acrylic paint on paper and canvas, Sonia paints scenes swirly with intimacy, animals and pattern. Sonia studied art history at Brooklyn college and is a self-taught and intuitive painter, drawing inspiration from the niche and nerdy, nature, and from a lifetime of seeking out time amongst beautiful objects.

The Hudson As Muse Basilica Back Gallery Artist In Residence Series invites artists to explore the location itself as muse, and to create work with the eclectic present and past of this river city as central inspiration.

As Sonia herself puts it, “The bank of the Hudson river is not a barefoot place, tiny spiky nuts line the shore ready to make you bleed as you press them into the mud. The water chestnut is an elegant formation and a tasty snack for everyone from muskrat to human. They were introduced to the area by a well-meaning botanist who believed them beautiful and harmless. But of course repercussions echo for decades and centuries when an ecology is changed, and the water chestnut now chokes out the sun along the banks of our complicated river, every year expanding their plots and giving less and less of a chance to the native species also hoping to thrive.

“It’s remarkable how perfectly human social structures are mirrored in our natural environments. Hudson the city contains so much spiky beauty, so many well meaning botanists accidentally introducing invasive species. The water chestnuts I’ve stepped on throughout this little life have always doubled as a metaphor to me about the unknowable impact of human enthusiasm. I love the water chestnuts, and they are an important part of the landscape I know as the Hudson River– but still I pull them out of the water whenever I see them growing.”

« ALL THE BODIES
Basilica Non-Fiction Screening Series: Our New President »