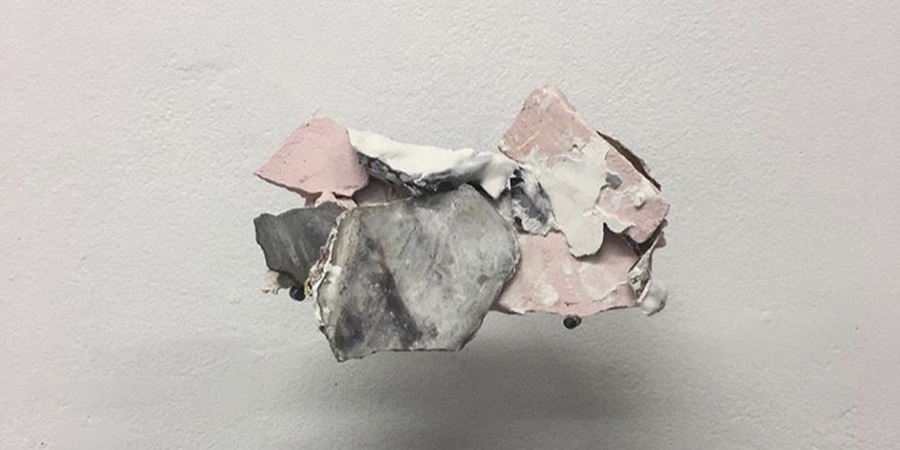 In these dark times the only refuge seems to be in art, for these are very dark times indeed. THE BRIGHT FUTURE GROUP SHOW is a group of younger and older artists brought together by Melissa Auf der Maur. Yes, the title of the show is somewhat sardonic. The younger artists in the show all have studied art and are attending or have graduated from various art schools. The older artists, David Aron and Jack Walls are longtime veterans of the Downtown New York art scene. The coming together of this diverse and talented group of seven artists is a sign of hope not subscribing to any politics, but can be viewed as a political statement with a dash of irony.

This exhibition continues Basilica Hudson’s 2017 thematic Back Gallery artist in residency program, which explores the location as muse. Creating the work in Hudson and at Basilica suggests that the eclectic present and past of this river city is central to inspiration.

Back Gallery Openings are a culmination of artist(s) spending some time in the space, experiencing the place and then opening it up to the public.

David Aron, born in Los Angeles 1970, started his early artist life in and around lower Manhattan from 1991 to 2008. Moving to NYC to attend art school, he briefly attended SVA studying illustration and fine art, but soon after became involved with Aaron Rose’s now legendary Alleged Gallery, showing there through the 90’s into the early 2000’s.
In 2008, Aron moved to the Hudson Valley for a quieter art practice, as a result his current work has continued as a solitary studio practice that can be perceived as a rudimentary direct approach to painting, sculpture, and wood collage. Looking closer, one might see a fascination with architecture, the plant kingdom, lofty geometry, symbols of the mind, and element motifs all mixed in with a foundation of modern abstraction, color contrast, and mark making.

To Simeon Amstutz a painting is like a proposition: This is x, or this isnt x. Each new painting presents its unique challenge and each time anew it must prove its validity as a thing existing in the world. A thing that asks its own question and necessarily has to provide its own answer. Painting is a statement, utilizing non verbal language. It seeks to invent its own language for making said statement. Amstutz is searching for ways to explore and expand his vocabulary as a painter. He is interested in finding new tools and/or technologies for making marks and creating contrast. Each new discovery gives opportunity for innovation and opens up directions and pathways that can be pursued. He strives to push and perhaps call into question established credos and conventions of image-making. These questions delineate an analytical process involving the artist and his work as well as his involvement and connection with the broader world around him and the critical discourse of his time. The work should be a reflection of my activities in this process. Simeon Amstutz

Elbert Perez is a visual artist that both works and resides in Hudson, New York. Primarily working in oil paint, he works to reinterpret objects and space to encourage a heuristic dialogue through elucidating philosophical concepts by means of transmuted semiotics. The works are more often an attempt at illuminating the most salient aspects of sensational reality, distilling signs of the absurd and the simulated real through a perverse dialectic. By divesting “sign language” of their form, it becomes less difficult to understand the greater substantial picture. He has never had sex before. Elbert Perez

Becca Van K is a Hudson, NY-based mixed media artist. Her work is highly sensory, with a strong focus on tactile comfort, the sounds of house & techno, and vibrant colors & patterns. Listening exclusively to dance music mixes when working puts her in a meditative rhythm, through which she transcribes her sensorial experiences. Each visual outlet is a means of reflecting her identity as a house/techno freak, hiker, and girl of the 90s. Becca Van K

In May 2017, Louise Smith received her Post-Baccalaureate degree in Painting and Drawing at the School of the Art Institute of Chicago. Smith graduated with a B.F.A. from Bard College in 2013 and was the recipient of the Jane Fromm Yacenda Scholarship of the Arts two years in a row. In June 2015, her large-scale abstract paintings were exhibited at the Cross MacKenzie Gallery in Washington, D.C., and received favorable mention from The Washington Post. Louise has collaborated on–and contributed to–three illustrated publications for Metambesem Online Press; has prepared monumental canvases for and maintained the studio space of painter, Stephen Hannock; has worked as an assistant for sculptor, Petah Coyne; and was an artist’s model at the Brooklyn Museum and The Studio School. Her work is currently part of the Wet Paint group show (McGuireWoods Gallery, Workhouse Arts Center-Lorton, Virginia), which was juried by Harry Cooper, Head and Curator of Modern Art at the National Gallery of Art. Louise lives in Hudson, New York, where her work continues to evolve. Louise Smith

Martin Katzoff strives to capture a very elemental sense of energy while, at the same time, trying to avoid flooding the viewer with information. In Katzoff’s own words “there is information everywhere all the time, and this pollutes my way of thinking or how I perceive time. It’s kind of nice to not have this official answer of what may or may not be going into my work, I think people have this idea of, ‘you’re only an artist if you do this’ and there isn’t a certain way of how things are supposed to look, so it’s nice for people to make up their own mind, but I also want them to know that there is no right or wrong answer, and for people to have their own freedom within the work.” Martin Katzoff

Jack Walls is a veteran of the New York art scene, of which he has been an active participant for more than 30 years. Mr. Walls paints, draws and does collage work. On rare occasions he performs his writings at poetry readings. He cites Robert Mapplethorpe and Patti Smith as strong influences. To a younger generation of artists he is regarded as a godfather or father figure. Mr. Walls lives and works in Hudson, New York. Jack Walls