Our ninth season saw music return to every corner of our reclaimed art factory on the river, with new friendships and partnerships welcoming all genres of musical innovation to the stage. Our Back Gallery residents experimented with live music, our walls rang with contemporary classical, 24-HOUR DRONE continued its international journey, and our annual festivals – Basilica SoundScape and 24-HOUR DRONE – both honored and celebrated sound in all its forms. 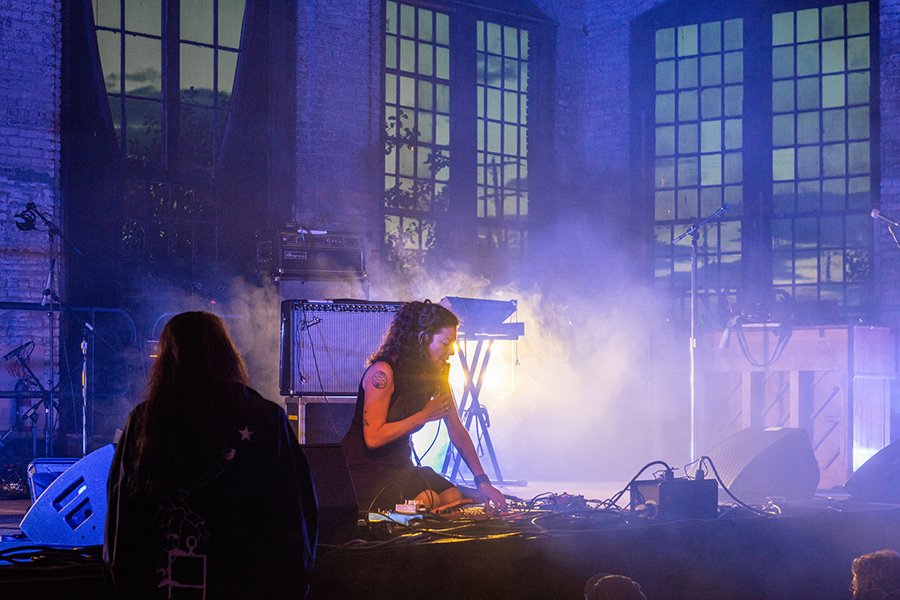 “What a weekend and what an extraordinary space in which to make sound! I am always in search of holy rooms for sound and this is certainly one!”
M Lamar, artist

From grindcore to an orchestral soundbath, and from floating sculpture to raw power poets, 2019’s Basilica SoundScape left our old factory on the Hudson River ringing in sonic bliss. We were beyond grateful for the warmth and generosity of all those who shared their art and energies with us, from the audio-visual neo-gospel of M Lamar to the visceral, full-body force of Lingua Ignota. In collaboration with our long-standing Basilica SoundScape collaborators The Creative Independent, and with the talents of guest curators Jenn Pelly and Sacred Bones, we brought an array of music to to the SoundScape stage, from NYC jazz pioneer Alan Braufman performing his acclaimed album Valley of Search, to The Body’s potent metal performed with The Assembly of Light Choir. In homage to Basilica Co-Founder and Director Melissa Auf der Maur’s hometown, SoundScape was peppered with Montreal sounds, from BIG|BRAVE, Bad Waitress, Jerusalem In My Heart and Jessica Moss. We were honored to host the North American premiere of Icelandic composer Johann Johannsson’s Virdulegu Forsetar for large brass ensemble. Performed by members of Bard Conservatory Orchestra as part of ongoing international tribute concerts to Johannsson, the piece made for a particularly moving moment. With other highlights including an intimate solo guitar performance by Waxahatchee, an all-hardware electronics set by Ela Minus, and an afternoon post-punk dance party by CRICKETS, browse the full 2019 SoundScape lineup here. 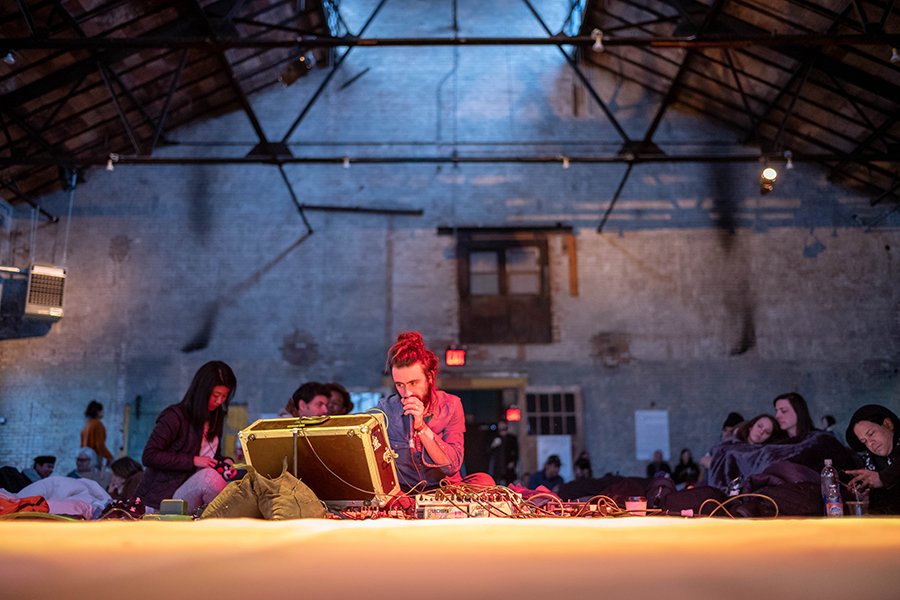 From doppler effect surround sound, to endurance tape loops and devotional dawn incantations, our fifth annual 24-HOUR DRONE: EXPERIMENTS IN SOUND AND MUSIC was everything we could have hoped for. Produced in partnership with Le Guess Who?, it was uplifting, buoyant and transformative, a homage to sound, a homage to the humanity of sharing space, and a homage to openness, willingness, generosity and stamina. The tapestry of sound at 24-HOUR DRONE is like no other, moving between Jeremy Toussaint Baptiste’s hypnotic midnight bass opus, Kinlaw’s DRONE closing devotional and XOIR’s vocalized sound bath, which used Hudson’s historical/industrial timeline and fluctuations in population as a score. Several artists responded directly to the space itself, with Anastasia Clarke making use of shards of singing bowls for her performance of Crushed Matrices, and Mark Trecka performing a sunrise set of field recordings taken through the previous hours of DRONE. Ben Seretan installed his 24-hour durational piece My Life’s Work in our Buddha Booth for DRONERS to experience. See 2019’s full 24-HOUR DRONE lineup here. 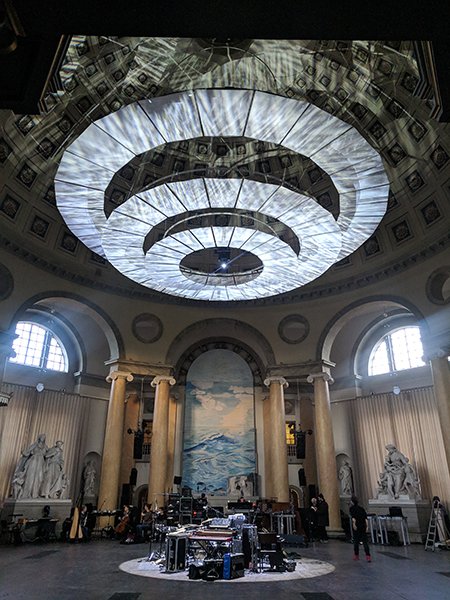 “Collaborative, respectful, observational. It’s so beautiful to see that, wherever we take DRONE, it always feels the same and that it always creates an environment of deep listening and deep collaboration.”
Melissa Auf der Maur, Basilica Hudson Co-Founder and Director

Since the first 24-HOUR DRONE in 2015, we have been sending out smoke signals to locate other organizations and individuals interested in collaborating on the creation of places for quiet, peace and listening. Over the years, 24-HOUR DRONE’s international satellite program has become one of the most fulfilling and nourishing elements of the DRONE concept. In 2019, we were delighted to partner with Lumen Project, Malmö Live and Fosshotel to present our experiment in sound + music to a new group of international friends, first in Malmö and Stockholm, Sweden and later at Fosshotel in Husavik, Iceland. With DRONE international satellite performers including Moor Mother, Noveller, Julianna Barwick, Robert Aubrey Aiki Lowe, Atli Örvarsson, Ólöf Arnalds and Mika Takehara, our 2019 international DRONES were a perfect continuation of the DRONE dream of collaboration and experimentation. See the full lineup for Malmö DRONE here. See the full lineup for Stockholm DRONE here. See the full lineup for Arctic DRONE here.

COMMUNITY MUSIC FOR ALL 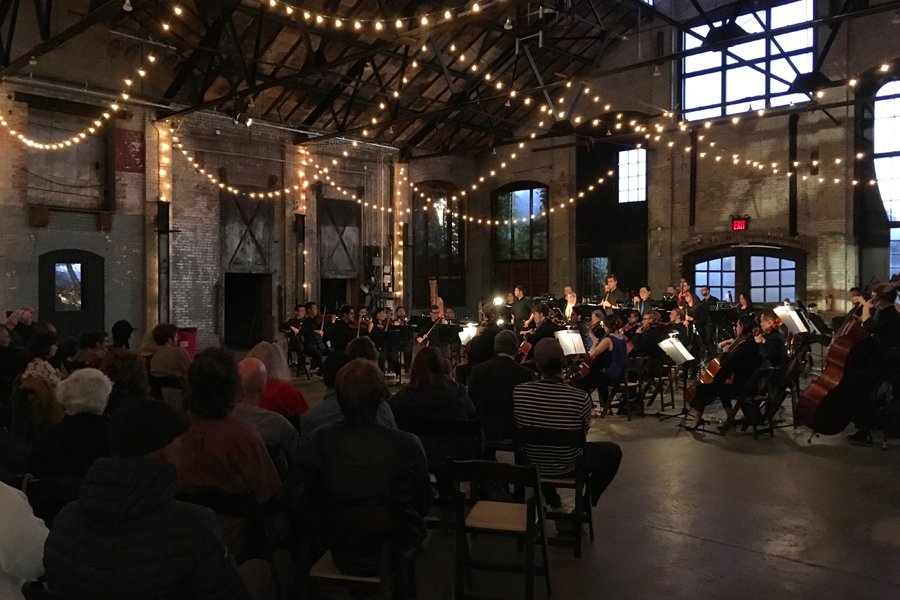 2019 saw us forge new and inspiring music partnerships with many new friends from across our region. We were proud to open our doors for a wide array of free live music performances, several of which deepened our connection with the Hudson Valley’s thriving contemporary classical community. In June, we were excited to be one of four free classical music concerts presented by Albany Symphony, one of this region’s most revered music institutions. SING OUT! presented a spread of classical staples including the timeless Beethoven’s 5th Symphony. This profound musical moment for our factory was further amplified with Music Director David Allen Miller declaring Basilica Hudson the greatest classical music venue south of Albany! Also performed that summer symphony night was Woven, a new work by composer Viet Cuong, whose music was complemented and enhanced by a striking, empathic contemporary dance performance choreographed by Hudson’s Adam Weinert and performed by the Hudson Dance Collective before closing out the night with a potent fireworks display over the backdrop of the Catskill mountains. In August, our friends from Art Omi returned, presenting a free afternoon of fully improvised music by their 2019 Music Fellowship cohort. In September, Bard College‘s The Orchestra Now took advantage of our striking acoustics to present a free, up-close encounter with their full symphony orchestra performing a selection of masterworks, including Benjamin Britten‘s Young Person’s Guide to the Orchestra.

LIVE MUSIC FROM THE BASILICA BACK GALLERY 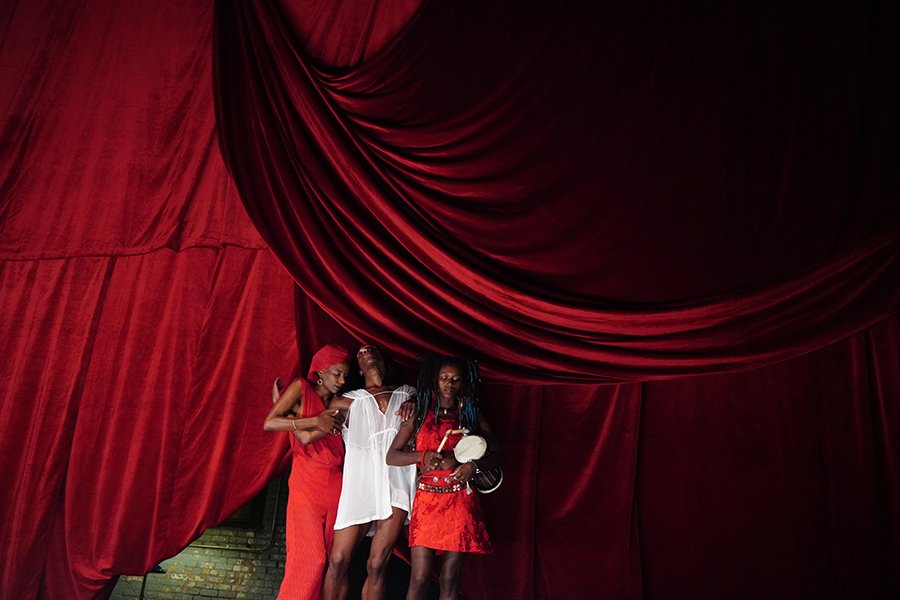 2019 marked the most multidisciplinary season to-date for our annual Basilica Back Gallery Artist In Residence Series, which invites artists to create work with Hudson itself as central muse. Inspired by the eclectic past and present of our river city, two of 2019’s residents included live music in the public presentation of their work. Sonia Corina Ruscoe’s ~*~*~Water Chestnuts~*~*~ – an exhibition which mused on the spiny invasive plants which line the shores of the Hudson River – opened with a live flute performance. In August, as the closing event for the first Hudson Eye, Back Gallery resident Davon presented her show One Night Only, which paired dance, drag and storytelling with intimate, up-close live music from Chris Garneau, Lady Moon and Nkodia. 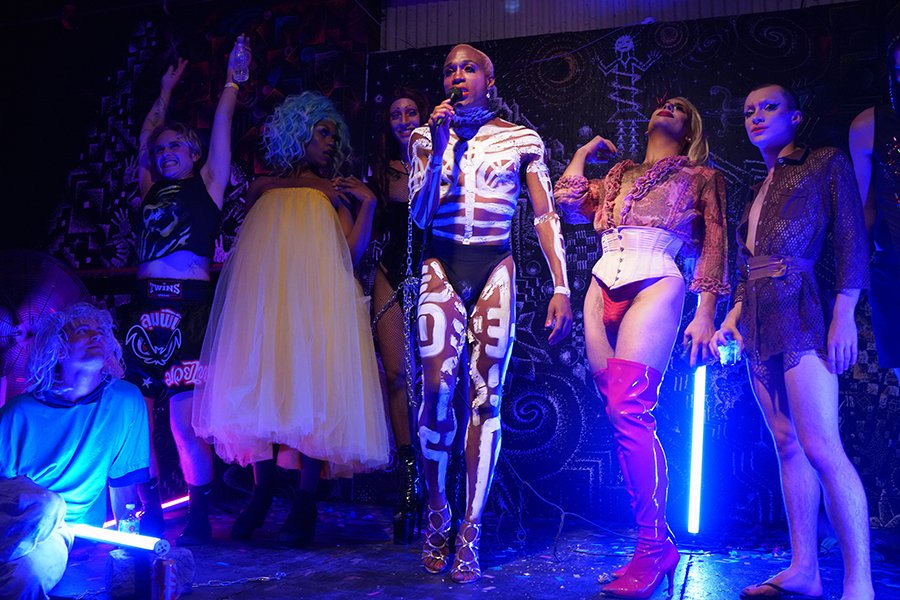 In June, in collaboration with our friends at OutHudson, Tiger House Hudson and Lil Deb’s Oasis, we threw an all-welcome, all-night dance party as part of Hudson’s 10th annual Pride parade. Coinciding with the 50th anniversary of the Stonewall uprising which kickstarted the modern LGBTQ+ movement, ALL THE BODIES was a night of music, dancing, celebration and community. The culmination of that hot summer night was one of the most spectacular dance parties our West Wing Bar has ever hosted in our many years of late night dance legacy. Hudson Pride forever! 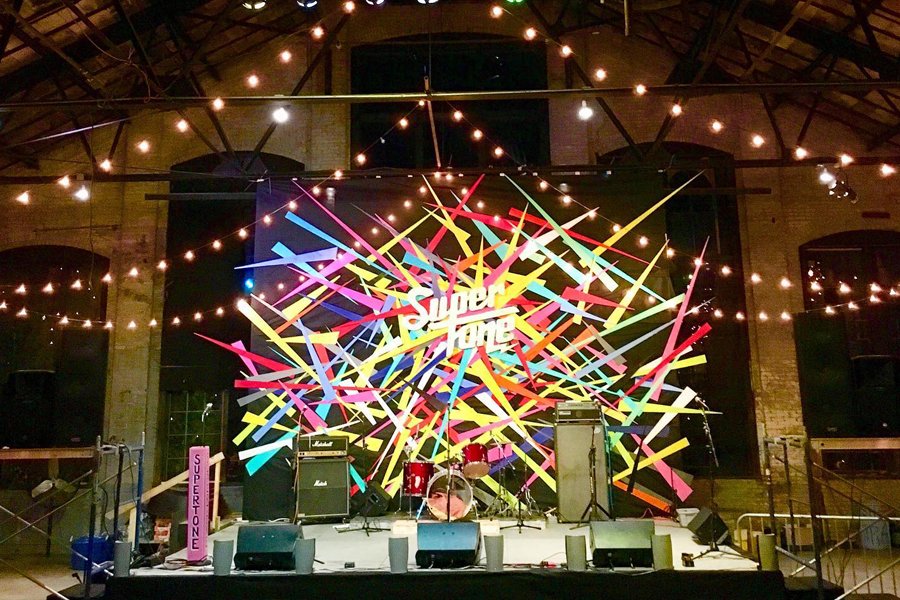 In June, the third-annual Supertone festival made its Basilica debut, with a bill of all things vibrant and original in rock, roots and honky-tonk music including Ex Hex, Habibi, The Felice Brothers, Thelma and the Sleaze and more. Supertone’s full day of live music brought a family-friendly day of celebration to our reclaimed factory on the banks of the Hudson River.