Suspended lanterns, boundless cinema, sunrise tape loops, hypnotic stories of the body and powerhouse poetry. 2019 marked a multi-disciplinary season of art, with artists and makers transforming every corner of our industrial church, and local creative minds continuing to highlight the dazzling spread of Hudson Valley creativity across all our programs. We once again committed to placing the eclectic past and present of our river city as central muse for our Basilica Back Gallery Artist In Residence Series. We developed and fostered new partnerships with allies like OutHudson and Albany Symphony. We brought art and sound together at our annual programs including 24-HOUR DRONE and Basilica SoundScape. In our ninth season of programming, art was all around. 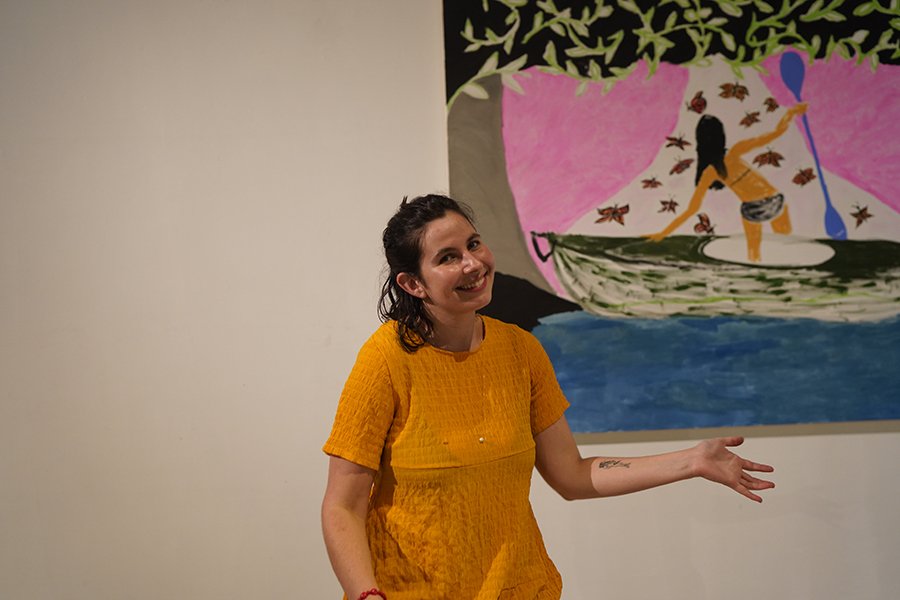 2019 marked the most multi-disciplinary season yet for our DIY artist residency. From dance to portrait, to film, to sculpture, to photography, the series showcased the dazzling variety of creative talent in the Hudson Valley. The series launched in May with Zia Anger‘s MY FIRST FILM, a cinematic experience like no other which has gone on to be showcased in a global tour, and to be named one of The New Yorker’s Best Films of 2019. Painter Sonia Corina Ruscoe hosted ~*~*~Water Chestnuts~*~*~ a study of the invasive species lining the shores of the Hudson River, launched with an edible, observational, ecological, botanical and interactive opening event. In August, Hudson youth participating in 2019’s Social Justice Leadership Academy returned for their second year as Basilica Back Gallery Artists In Residence with a striking study of inequality and oppression inspired by Basquiat and beyond. Davon‘s ONE NIGHT ONLY marked the first dance residency for the Basilica Back Gallery. Reimagining Hudson as a personal rehab, Davon’s striking final performance captivated a capacity crowd with music, dance and drag blended with storytelling, humor and disarming honesty, presented as part of The Hudson Eye series of programs. The 2019 series culminated in September with an exhibition of new photographic works by Daniel McCabe. A selection of arresting, large-scale nature photography, the images invited viewers to meditate on man’s interaction with his environment – in McCabe’s case, the Hudson River Valley. 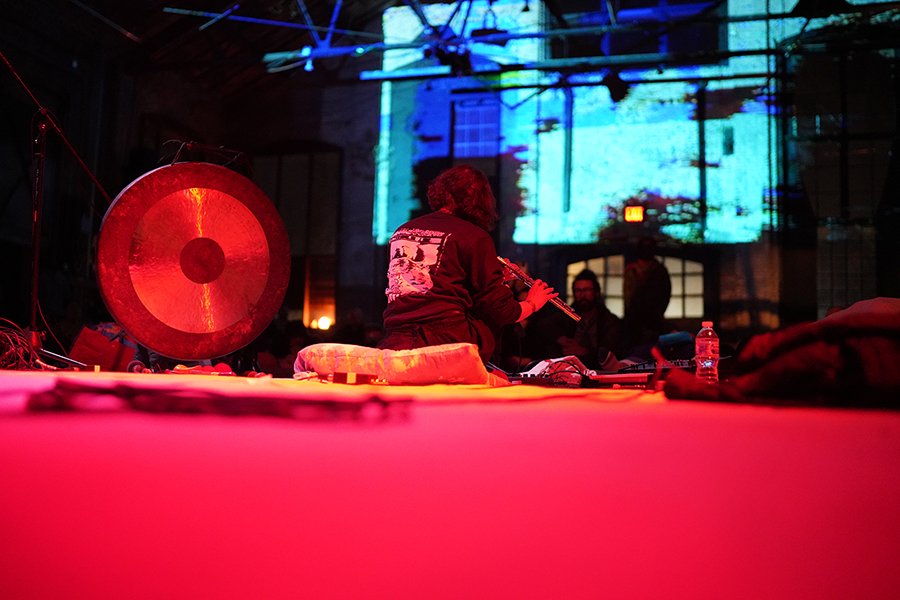 One of the most beautiful things about 24-HOUR DRONE is its transient nature; first time collaborations, improvised pieces and experimentations exist in this space and this space only, transforming after the event into something more ephemeral in our collective memories. 2019’s 24-HOUR DRONE saw every corner of Basilica transformed with ingenuity and creative drive, from Ginny Benson’s large-scale A/V takeover of Basilica’s brick walls, to Mark Trecka’s endurance field recording project and sunrise tape loop performance. Produced in partnership with long-time collaborators Le Guess Who?, 24-HOUR DRONE’s visual art element was the perfect complement to the sonic experimenters taking the floor. 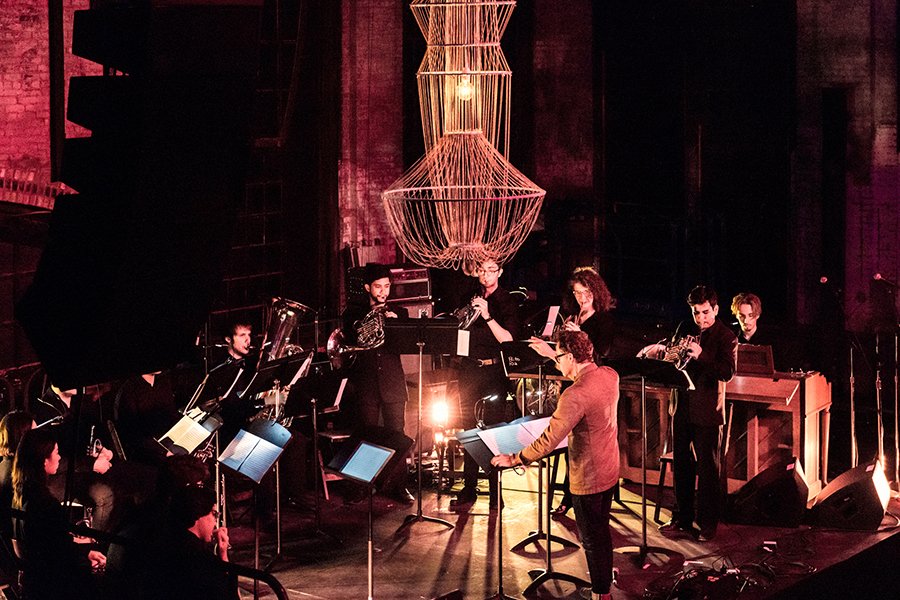 From floating sculpture to raw power poets, 2019’s Basilica SoundScape was a perfect, ramshackle example of our dreams of exchange and expression! New for 2019, Basilica SoundScape hosted a bill of poets performing their work in the unique setting of a vintage Hudson trolley car. The work of visual artists complemented and enhanced the space, the sound and the music, with sculptor Austin Ballard pleating and draping lampshades into cascading totemic forms suspended from the rafters and DIY underground veteran Sam Ryser presenting a selection of his work from both within and outside of the music world, from custom wearable pieces to show posters and album artwork. With Basilica SoundScape once again presented in collaboration with our longstanding partners The Creative Independent, in 2019, we were delighted to welcome the talents of guest curators Jenn Pelly and Sacred Bones, as well as the assistance of River Valley Arts Collective. We closed out our weekend with a day of programming curated by writers Joey de Jesus and Shanekia McIntosh, whose third and final TRIPTYCH performance featured standout performances by Black women poets, sound artists and DJs synthesizing and remixing their sonic reality, from YATTA to SHYBOI and from LaTasha N Nevada Diggs to Aristilde Kirby. 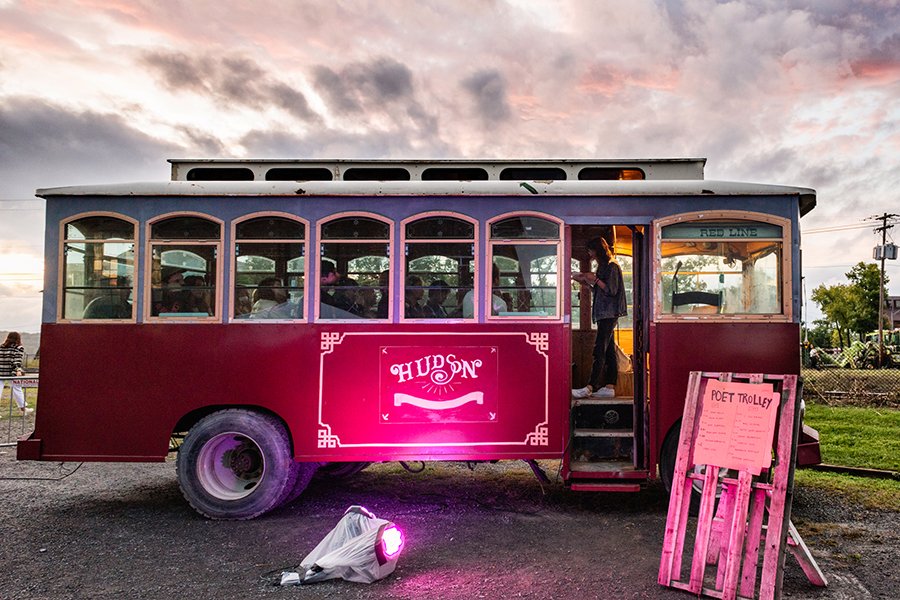 Let other music festivals have their haute-hippie selfies and front-to-back rock-album recitals. Basilica SoundScape can now lay claim to its very own poet trolley—an antique trolley car retrofitted to host readings, a new addition to this upstate arts summit. SoundScape, the flagship weekend for the Hudson, New York, performance venue, evinces a mind-set that’s at once bookish and noisy.
Jay Ruttenberg, New Yorker 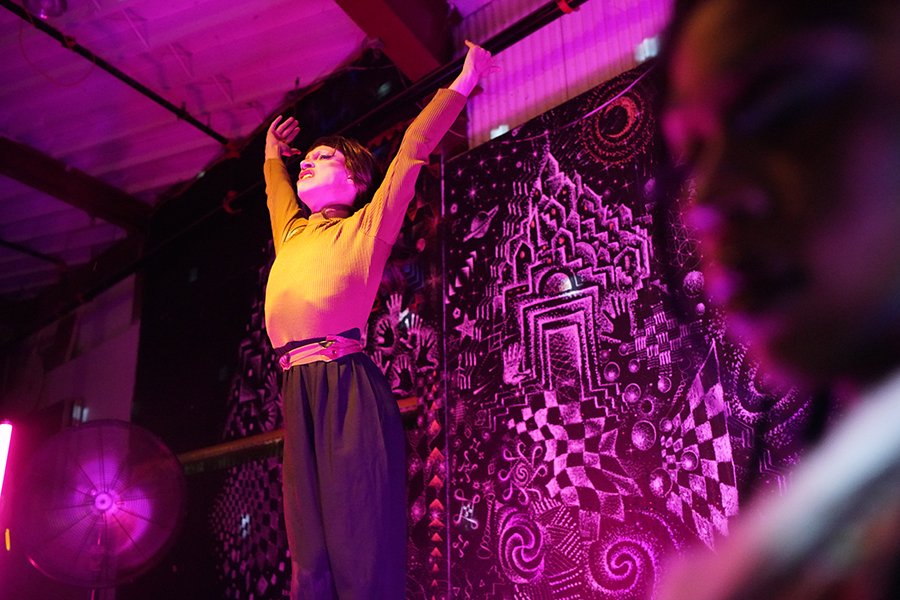 In celebration of the tenth annual LGBTQ+ Pride event in the city, and in recognition of the 50 year anniversary of the momentous Stonewall Riots in Greenwich Village which kick-started the modern LGBTQ+ rights movement, we were proud to host a late-night-all-welcome dance party celebration of ALL THE BODIES, in collaboration with our friends at Lil Deb’s Oasis and Tiger House Hudson. Hosted by Hudson queer performance artists Davon & Celeste, we enjoyed food, music, drinks and dancing, In addition to being a dance party for the ages, the drag / performance art on display from the hosts and Jessica, Victoria Precise, Venus, Wheeler and Savion demonstrated beyond doubt the continuing legacy of queer Hudson Valley talent. 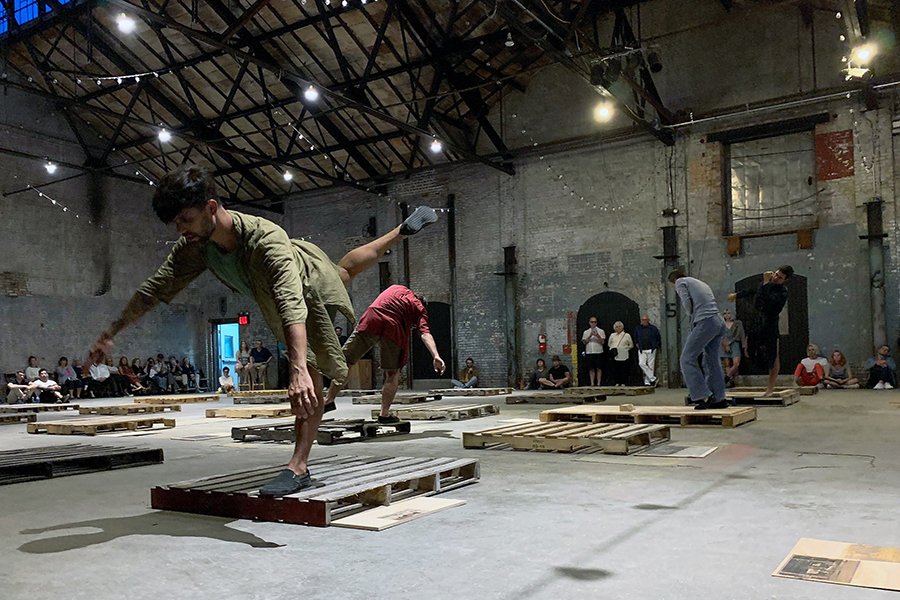 In August, as the launch night for the first annual Hudson Eye series of public programs and urban showcases, long-time friend of Basilica Jonah Bokaer hosted Dry Docking, an evening of contemporary dance and performance meditating on the current refugee crisis. With set pieces designed by acclaimed visual artist and Hudson Valley resident Rachel Libeskind and constructed from industrial materials from pallets to parking signs, the raw pieces at the heart of the set were the perfect counterpoint to the dancers’ fluid, empathic movements. 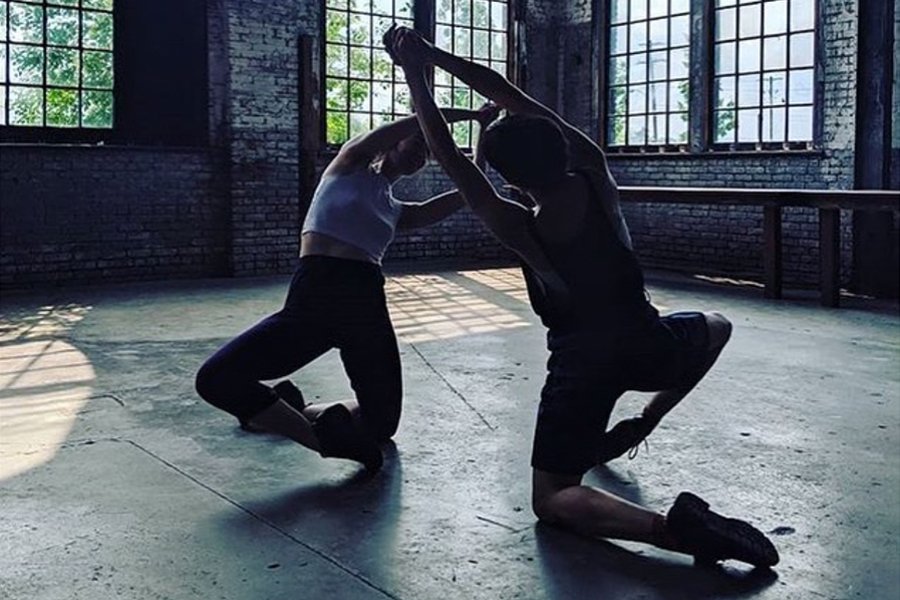 In June, we were delighted to be one of the hosts of Albany Symphony’s four-part Sing Out! series of concerts across the region. The free program – an immersive, interactive afternoon of performance for dancers and symphony orchestra – featured a performance of Woven, a new collaborative work by composer Viet Cuong and Hudson-based choreographer Adam Weinert inspired by the perseverance and humor of those who awakened a new era in the LGBTQ rights movement with the 1969 Stonewall Uprising. Threaded together with bright swathes of fabric suspended from the Basilica rafters, the newly-formed Hudson Valley Dance Collective fused the talents of established professional dancers and enthusiastic and talented amateurs in a moving, striking original piece of dance. 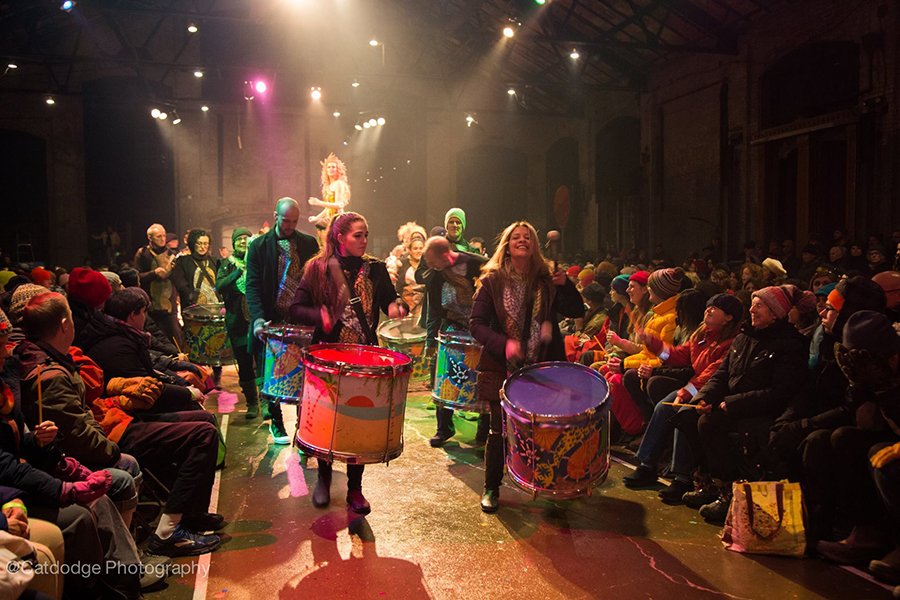 Our art factory was transformed in early 2019 by a community-centered visual art, music and sculpture program. Presented by Harpooned Productions, an artistic production company led by installation and performance artist J. Patrick Doyle, Imbolc Riverfire welcomed and celebrated the arrival of spring with a performance which presented the Greek myth of Demeter and Persephone through music, movement, sculpture.