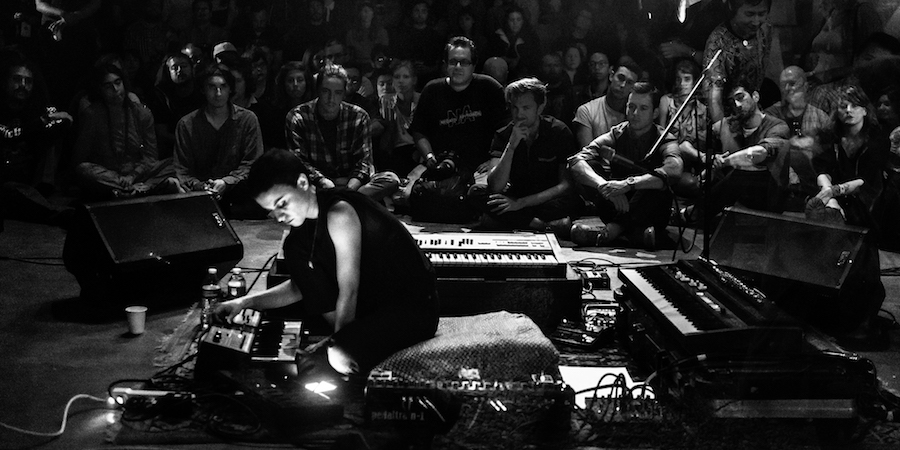 Part 2 of 4. For a short review of our whole season, please click here.

Our industrial cathedral was awash in sounds of all stripes this year as we presented pioneering people and delighted DRONE devotees. Sound art and music co-mingled to points beyond recognition in an exhibition of sonic academic inquiry and a holiday procession of old-school cassette boomboxes. Basilica SoundScape turned a partnership corner and a milestone age, and a new neighbor / old friend filled our halls with classic sounds-turned-new with the help of her dad. Our Co-Founder and Director reminisced onstage with a former classmate to a standing-room-only audience, and our annual (FREAK) FLAG DAY expanded into an all-day-all-night celebration of music, dancing and community. Read more below… 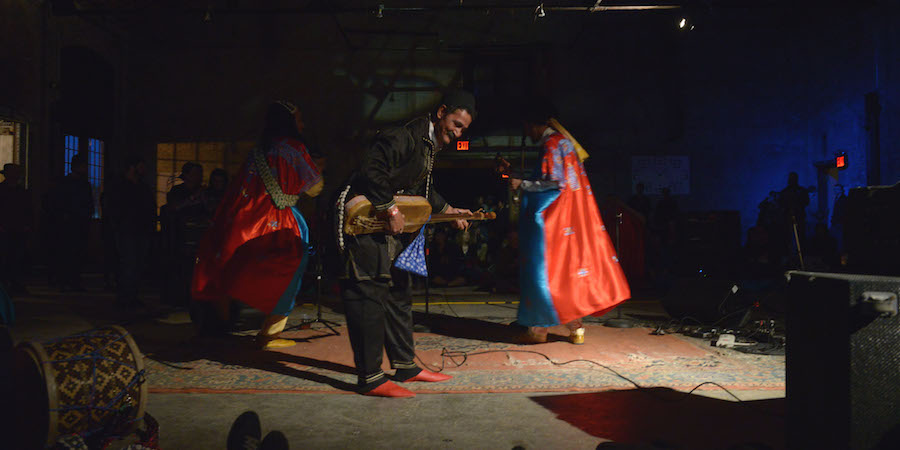 Basilica once again flung open its doors and expelled the winter doldrums with 24-HOUR DRONE on April 23-24, co-presented with Le Guess Who?. We collectively experienced the power of DRONE with over 700 people! This year’s attendees ranged from children and families to meditative travelers of the unknown—reflecting the true nature of 24-HOUR DRONE as a place for communal and conceptual experiences. An immersive event and all-encompassing experience, 24-HOUR DRONE features musicians and sound artists experimenting within the spectrum of drone – sustained tones shaped by voice or instrumentation. 24-HOUR DRONE embodies Basilica at its most experimental and experiential – pushing the boundaries of what a communal, conceptual experience can be. Through 24-HOUR DRONE, Basilica offers a platform for truly experimental and emerging work.

At times, I feel like I am inside Jimi Hendrix’s amp in super slow motion. Other times, like helicopter images of Vietnam War—then an alien invasion completely taking over my body, brain, heart, lungs. Like Drano for the soul.” I was excited to share it with her, the woman who raised me to love art and music the way other people love Jesus.

– Jamie Peck, I Went To A 24-Hour Drone Concert With My Mom

I couldn’t really identify who was playing, but I felt like I was living in a telephone that was connected to dial-up internet. The sounds were crunchy, distended, and erratic. I realized I just had the strangest and most beatific night of sleep I can remember ever having.

As the train hurtled along the edge of the river, its wheels hiccuping along the tracks, and the assured hum of the engine sighing in the background, I was reminded of the perpetually vibrating concrete floors and viscous sounds that I bathed in for the last 12 hours. Eyes fluttering shut, I did my best to internalize the secret lessons that such an experience can impart—that if you just focus on a single sound, savor it, and let it pass through you, the world can slow down.

– Kevin Lozano, I Spent 12 Hours at a Drone Festival and It Made the World Seem Like a Better Place 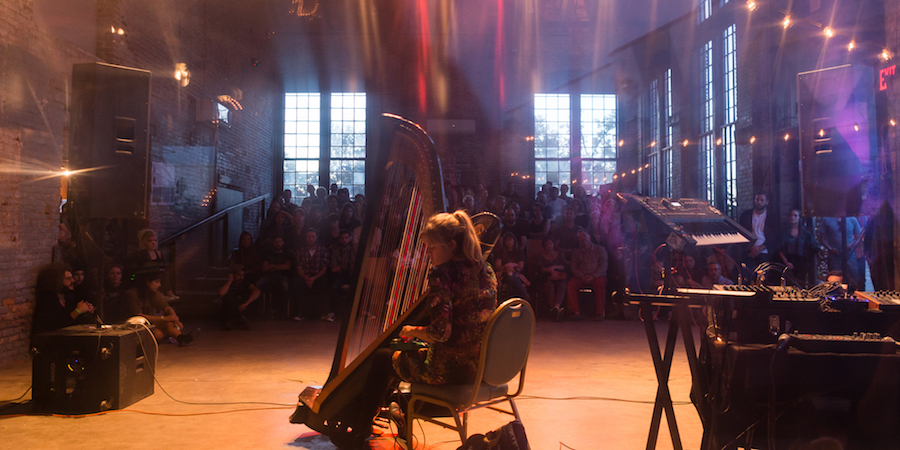 For the fifth year in a row we succeeded in our ode to all eclectic, genuine, independent, fearless, beautiful, punk, experiential, magical, dark, light and loud. We are grateful to our collaborators Brandon Stosuy (with his new project The Creative Independent) and Brian DeRan / Leg Up! Management for sharing and building the vision with us. Thank you to all the artists that stepped off the beaten tour path to be with us. Hallelujah to the attentive and adventurous viewers, listeners and campers! We all made this dream, in a big factory in a little city, come alive this past weekend. So many BSS returners and new allies made, all in hopes of keeping the heavy communal dream alive.

And some choice words from the press below…

…for anyone near Hudson in September, SoundScape is a worthwhile way to escape the real world temporarily, a totally unique and absorbing experience only heightened by the fact that it’s hard to believe it exists in the first place. Hudson, NY feels like it shouldn’t be real in 2016. Between its bucolic backdrops, the gorgeous old houses, and its quaint main drag … it feels like something out of time, like you’re on a film set … SoundScape is a dreamlike event.

High-art aspirations, so uncommon among the summer music festival circuit, are a key reason why Basilica SoundScape is by now the preeminent anti-festival (scare quotes no longer needed) of the U.S. Northeast, with elder artists and art-goers mingling among the hipsters.

Basilica Hudson’s fifth annual Soundscape festival is, as one might imagine, a blurring of the sonic and visual arts set in the spectacular reclaimed industrial space of the Hudson mega-venue. Year-’round, the venue specializes in music as matter: music of atmosphere, layers, texture and color, analogous to visual arts whether or not it is being coupled with them. 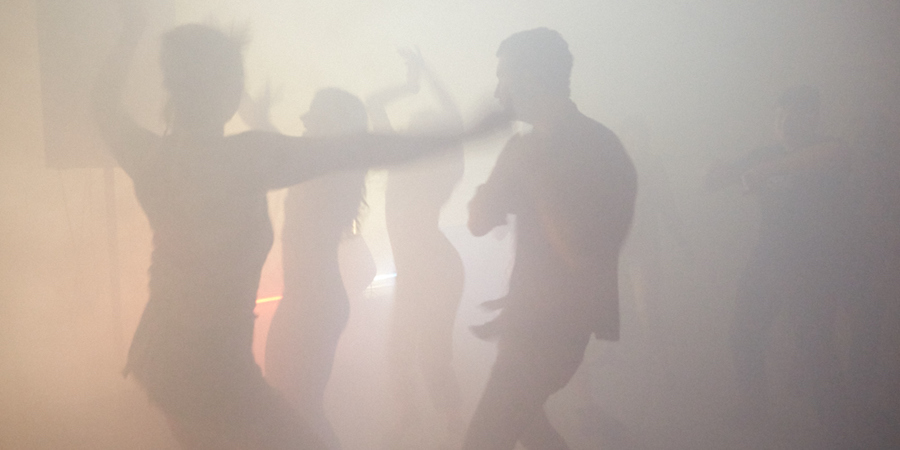 (FREAK) FLAG DAY was amazing this year. We had so much fun spreading the love throughout our freaky little town. After the Flag Day parade and a Darkwave Comedy Happy Hour, an orchestra of fireworks set the backdrop for DJ sets by VEENGER CLUT, DJ Nick (CHERYL) and Basilica’s own SVB, and a live performance by Brooklyn-based duo Mirror Mirror, onetime tourmates of FFD OG’s Light Asylum.

Basilica Hudson and clmp (Community for Literary Magazines and Presses), presented Read & Feed, a new festival for food and literature, on July 30. A non-traditional book festival, Read & Feed offered a platform for writers to connect in new ways with fans, within the performative context of Basilica’s space. This inaugural “mini-festival” featured panel discussions bringing together writers, farmers and chefs, cooking and mixology demonstrations, a marketplace of small press publishers and spectacular eats and drinks, alongside a marathon reading of celebrate composer John Cage’s Diary: How to Improve the World (You Will Only Make Matters Worse). Co-presented by The John Cage Trust, the durational performance was broadcasted on WGXC and the recording is archived here.

To celebrate the 20th anniversary of Hudson’s annual Winter Walk, the Hudson Opera House presented the Hudson debut of Unsilent Night, composer Phil Kline’s magical community musical parade. Basilica acted as launch pad for the collaborative sound-as-art-as-spectacle procession through Hudson’s streets. Led by Kline himself, participants walked together as his original four-part composition played on cassettes and mp3s on hand-held boomboxes, creating a unique and luminous soundscape. The whole thing was broadcast live on Wave Farm’s WGXC 90.7FM and streamed online at wgxc.org.

“Spirit sister of Basilica Hudson, Amanda has been a steadfast supporter of our mission and love of our factory since the beginning. We are honored to be one of the few to be hosting her and her father’s rare performances in our temple of sound. She is a force to be received, a daring talent — and new mother! MOTHER / SON DRONERS!!!! She and Ash, her six-month-old son, spent the night in our factory at our 2016 season opener, 24-HOUR DRONE! That is a true reflection of her commitment to music, experience and our community.”

Saturday, July 23, marked an evening with father-daughter power-duo Jack & Amanda Palmer, supported by an opening performance by percussive polymath Thor Harris and his group Thor & Friends. Amanda & Jack Palmer performed a set of covers from their carefully selected new release, You Got Me Singing.

A lovingly put together album,You Got Me Singing marked the first collaboration between new mother Amanda and her father, written and recorded while her baby boy was in utero — a fluid family dialogue between Jack, Amanda, and her unborn son. Amanda sings and plays piano and ukulele, and Jack, a semi-professional choral singer, plays guitar and lends his rich bass voice to a variety of cover songs that span decades.

“The main inspiration behind this record was to share songs and time with my dad,” says Amanda, who was separated from her father when she was less than a year old. “It was a really good reason to spend healing time together, sharing our musical histories, all poetically punctuated by the fact that I was seven months pregnant when we recorded. I knew that from my post at the mixing desk and the mic, this music was being heard in the womb, and so the song selection was really important…we didn’t want this album to sound corny, we wanted it to sound like the connective tissue between three generations.”

Jack Palmer, who is 72 and sings choral music regularly for the National Cathedral in Washington DC, says “I believe nothing is more powerful than love, and that nothing expresses it better than singing. It was one of Amanda’s songs that began healing our fractured relationship. Years later, I hope the love that went into this project will perhaps touch listeners in the same way.”

Opener Thor & Friends was founded in the autumn of 2015 by Thor Harris after five years of touring as the percussionist of iconic avant-rock ensemble Swans (heroes of Basilica SoundScape 2014). 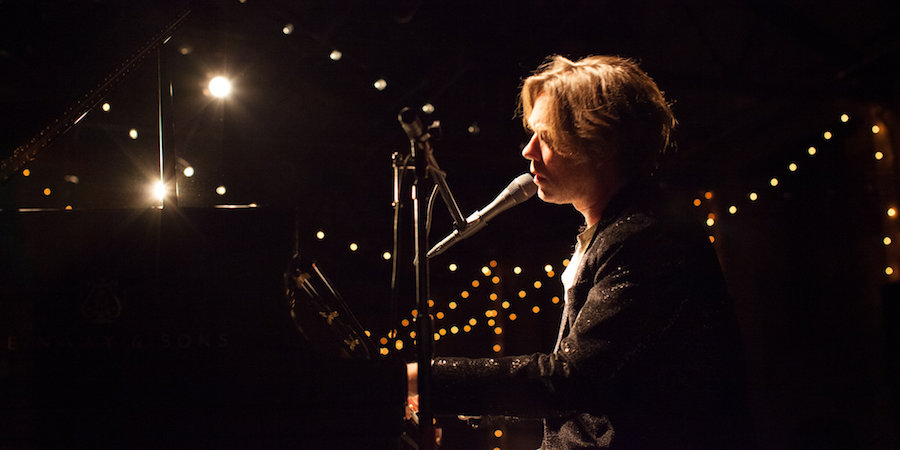 Pioneering People is a bi-annual program celebrating pioneering artists across a range of disciplines, and includes a benefit performance. This year’s concert by Rufus Wainwright was sold out completely and was a great success, drawing more than 600 community members to our big old factory by the river!

The event began with a conversation between longtime friends Wainwright and Basilica Hudson Director and Co-Founder, musician Melissa Auf der Maur, who grew up together in the vibrant culture of Montreal. As Montrealers living in the US, both dual citizens who have made their careers in America, they share a strong connection to their home city and to the national values that make the arts an integral part of the social fabric of Canada, well supported by the government and the general public. Two weeks out from the US presidential election, these two artists pondered the existential question of what role the arts can and should play in these turbulent times.

The conversation acted as a backdrop for the evening, advancing the organization’s mission and vision while setting the stage for an epic grand piano performance by Wainwright in our industrial church. Embodying the kind of free and fearless artistic path that Basilica Hudson strives to support, Wainwright’s singular musical gift is symbolic of the organization’s dedication to present an always-vibrant roster of art and community programs.

Wainwright’s performance took the crowd back to his roots of raw, intimate performances in Montreal’s dark piano bars decades ago, a monumental period of creative freedom when Wainwright and Auf der Maur found themselves and their voices in music, propelling them into a lifetime of friendship and commitment to the performing arts.

The performance provided the audience with a stark juxtaposition to Wainwright’s recent extravagant performances of Judy Garland with full orchestra, and touring with his Prima Donna opera, as well as his newest album Take All My Loves: 9 Shakespeare Sonnets.

This event marked turning point for the organization, the culmination of six years of effort towards building a sustainable nonprofit arts and community event space. Basilica Hudson successfully achieved formal 501(c)(3) non-profit status this fall, based on a dynamic roster of programs established since its founding in 2010. The Pioneering People benefits are the organization’s most important annual fundraising activity. Proceeds from the event help the organization to build sustainability for the long term, ensuring Basilica Hudson can continue to experiment, explore and reach further, and to always serve as an important local, regional and national platform for artistic expression, freedom and exploration.