This year, Basilica launched the first annual stateside installment of 24-HOUR DRONE: Experiments in Sound and Music, an adventurous collaboration with Le Guess Who?, an annual festival in Utrecht, Netherlands. Summer began with our favorite ritual recognition of the (FREAK) Flag Day tradition in Hudson, helmed by darkwave goth queen Shannon F of Light Asylum with special musical guests and freak flag-making workshops. For the first time, the hallowed Main Hall was filled with opera arias when we collaborated with Il Cuore Canta (The Heart Sings), a workshop and concert series. It was wonderful to see our industrial church lend itself equally to chamber music by the rising young artists of the Catskill High Peaks Festival, the post-rock squall of Godspeed You! Black Emperor, and intensity of talent at the fourth annual Basilica SoundScape. We wrapped up our season with CELESTINE V: A NIGHT OF ASTRAL SOUND, a celebratory sonic embrace of darkness and light.

BASILICA SOUNDSCAPE: A FESTIVAL OF POP, PUNK, AND SO MUCH ELSE 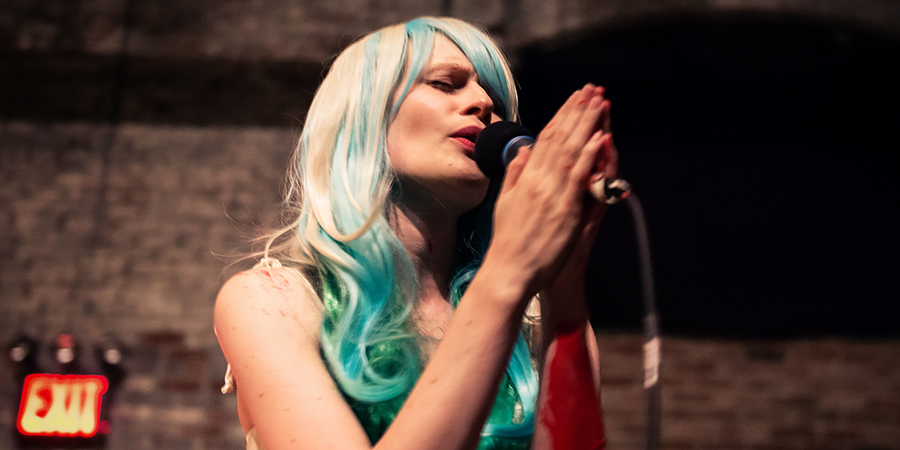 Basilica has achieved a perfect nexus of city and country, music and mystical experience, becoming a destination for the kinds of discovery that made us love music in the first place. – Newsweek

The space, as we of Hudson and environs know well, is both awe-inspiring and welcoming; the crowd, uncrowded and deeply and sometimes loudly appreciative, if almost too hip even for Hudson; the food, from Alimentary and Truck Pizza, fresh, inventive, delicious, and cheap enough; the music, cutting-edge, eclectic, beautiful or powerful or strident or all three; and Dan Colen’s enormous, sculptural, ethereal canvases, painted on site, la dreamlike underscore….I missed a lot, but I was there for the vibe, the mother of invention, the essence, the atmosphere. – Enid Futterman, Imby

For the fourth straight year, we proudly collaborated with B​randon Stosuy​ of Pitchfork Media and Brian DeRan of Leg Up! Management to present Basilica SoundScape, our immersive weekend  of music, art, and literature and the jewel in our Basilica crown.

In another sold-out year, artists and attendees alike all participated in the sonic communion, a singular experience in the mini-but-mighty town of Hudson. Our whole season leads up to this annual ritual, stepping us effortlessly into the autumn season. Blessed by heavenly rain, the weekend buzzed with a perfect confluence of people, music, art, and food. Renewing its characteristic brand of creative cross-pollination, the lineup featured music makers HEALTH, Acress, Weyes Blood, Viet Cong, Lydia Ainsworth, Jenny Hval, Circuit Des Yeux, Sannhet, Triangle Trio (Chris Corsano, Otto Hauser, Ryan Sawyer), Wolf Eyes, Indrajit Banerjee & Gourisankar, Perfume Genius, and The Haxan Cloak. There were readings by Holly Anderson and Chris Brokaw, and Writers In The Rafters: Dorothea Lasky, Ariana Reines, and Sarah Jean Alexander. Pop-up shop Bunnybrains Loves You: Rewriting History with Invisible Ink featured guest performances and live radio stream via our community radio station, WGXC. Our guest artist Dan Colen took up residency in the Basilica a week before the event to create large-scale Tar and Feather paintings which gave the festival its garment, and we presented “The Now Forever”, an art exhibition in Basilica’s Back Gallery. A Balkan-inspired feast was served in the Alimentary Kitchen and Sunday was open to family fun with a mini Basilica Farm & Flea, a preview of our wildly successful Thanksgiving marketplace. 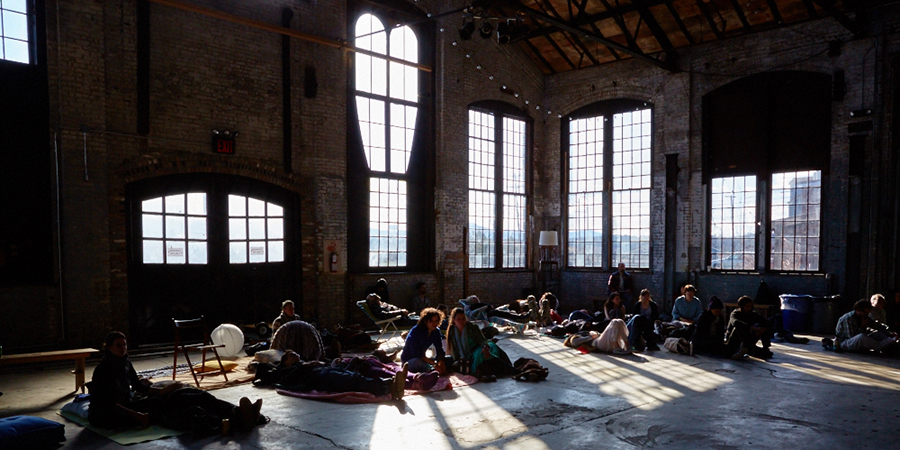 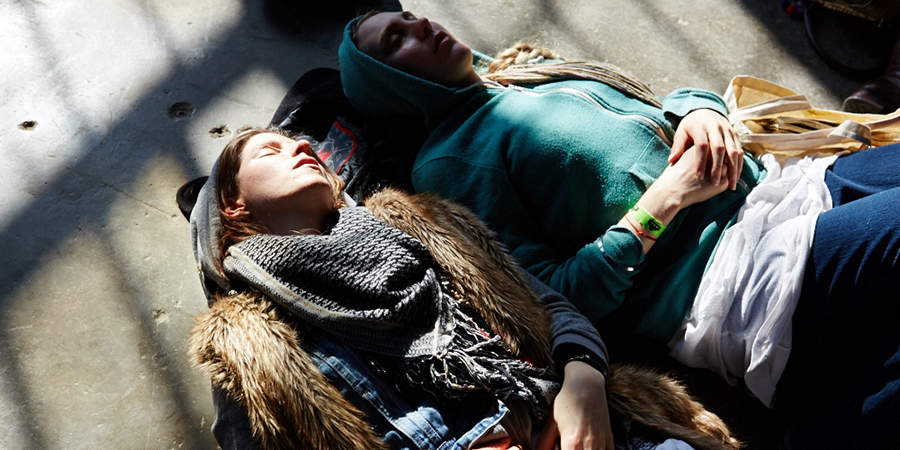 Sound as Experience. Sound as Installation. Sound without the tight hands of Time. To honor sound in a space that enhances it and places it  in a long-form time schedule that allows it to expand. Located in an Industrial Temple of Sound, to honor the making of sound, as a fully immersive experience. Explore. Experiment. Exchange. – Melissa Auf der Maur, Co-Founder and Director, Basilica Hudson.

24-HOUR DRONE was enchanting. A lovely gathering of people willing to fully embrace an idea; a unique way to enjoy space and sound and each other… I was thrilled to be a part of it and look forward to seeing it develop and grow over the years. Thank you Melissa, Bob, Tony and all the wonderful Basilica and drone people for taking a risk and making it happen. – Jessica Moss

Basilica Hudson announced the opening of its fifth season on April 25 and 26, 2015 with the first annual stateside iteration of 24-HOUR DRONE: EXPERIMENTS IN SOUND & MUSIC, a collaboration with Le Guess Who? music festival in Utrecht, Netherlands. An immersive event and all-encompassing experience, 24-HOUR DRONE featured musicians and sound artists experimenting in electronic, psychedelic, classical, non-western and instrumental drone music.

The unforgettable experience involved: Noise blast and explosive performance by Prurient. The mystical reveal of Silver Mount Zion’s Jessica Moss with her violin. Return of the one and only Greg Fox, whose drum solo is always worthy of standing ovations. A surreal Lincoln funeral procession culminating in the epic Bobby Previte-led orchestra playing tribute to both the great leader and jazz composer Aaron Copland. Arone Dyer of Buke & Gase led a drone choir of maidens. Randy Gibson performed “Intoning the Starfield Symmetry”. From Montreal, SUUNS experimented and droned just for us. Seth Chrisman & Nathan McLaughlin wove a sonic web with cassette tape film. Gong immersion revived us on Sunday morning. Representative I performed butoh in the wee hours of the night. Second Ward Foundation curated an all-female video program from their extensive collection.

It was truly a transcendent experience that was shared and made more magical thanks to the hundreds who spent the duration with us, bundled up in blankets, falling in and out of dream, all in the name of SOUND and COMMUNION.

We did our best to capture 24 hours of drone magic in 15 minutes and, WGXC captured all 24 hours of sound and music. Settle in and turn on the drone: 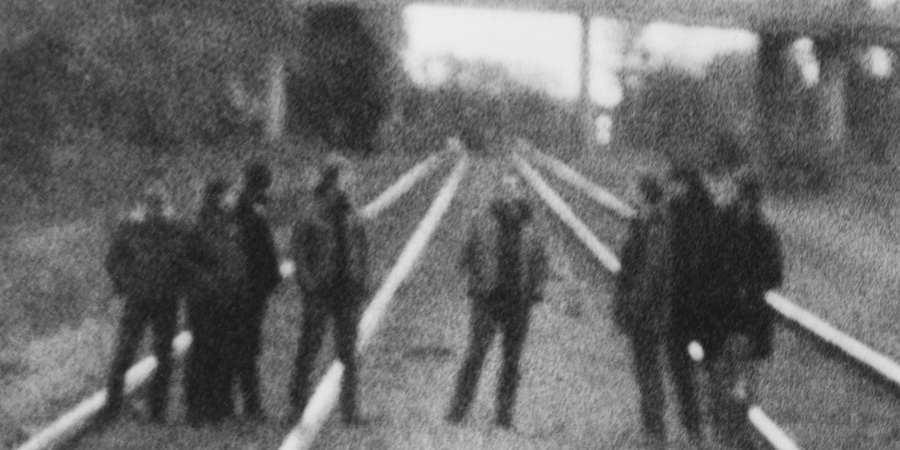 In our warm up to the magic weekend of music and art that is Basilica SoundScape, Godspeed You! Black Emperor – the Montreal clan and longtime friends of the Basilica – returned to cleanse the space and bathe us in sound. In the midst of a record-breaking September heat wave, we convened before this legendary band for a sense-rattling, operatic, yet intimate set with clunky, gorgeous film loops. It was a Tuesday evening to be remembered before the full sonic immersion to come. 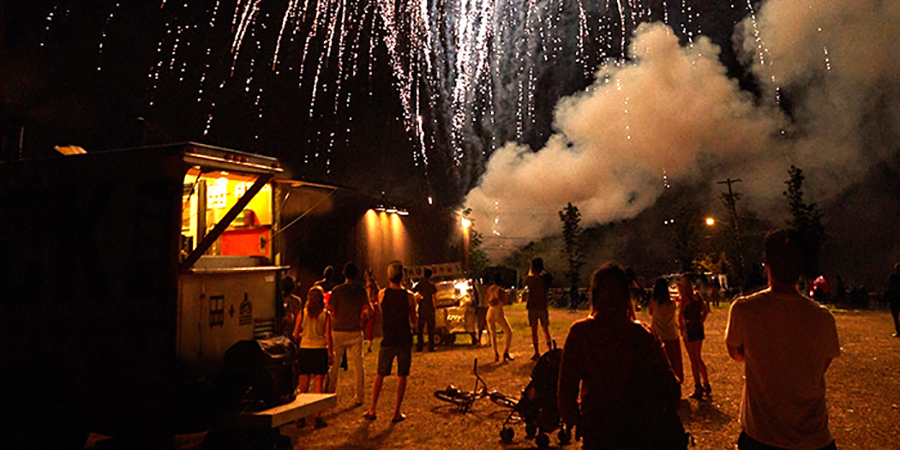 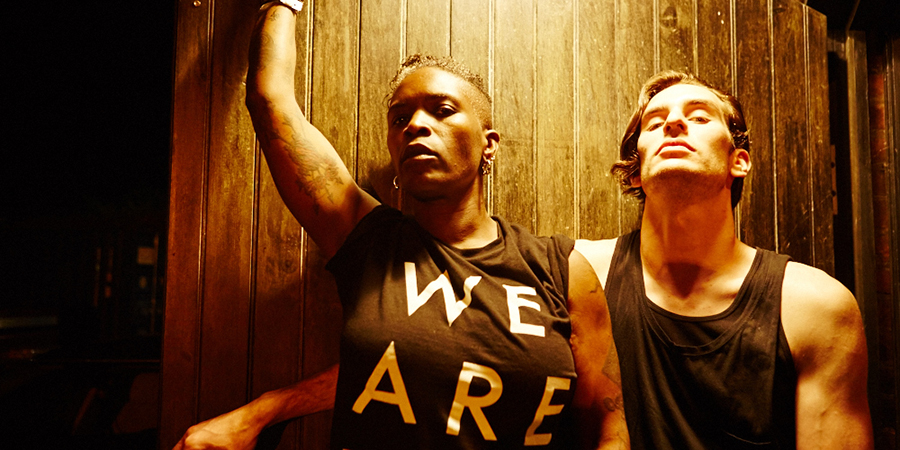 (Freak) Flag Day brings out a crazy-cross-section of people, from firefighters to high-school bands to politicians and local people of all kinds. And the dialogues among gays, freaks, and tree-huggers are part of this interchange too. All of these people – including the progressive/lefty types – have a presence here, are part of the dialogue. And they’re patriotic. They love where they live.  – Melissa Auf der Maur, Almanac Weekly

Shannon F, founding member of goth electronic duo Light Asylum, is by now our official (FREAK) FLAG DAY ambassador. For the third year, she joined us to host the after-dark party we host in ritual recognition of the beloved Flag Day tradition in Hudson. This year, she returned to her musical stomping grounds with Light Asylum first performance in 2 years (!) followed by a heavy DJ set by Neon Music and YouWho – all set in our raw, gloriously industrial space. During this, the weirdest holiday of the year, attendees witnessed an epic fireworks display steps from the Basilica doors. Fireworks brought noise from the outside in and tree huggers, film lovers, and goth mothers danced and raised flags and funds for Basilica’s arts programming.

OPERA PERFORMANCE BY IL CUORE CANTA SHINES
In one of two classical music collaborations this season, we were honored to work with Il Cuore Canta to present “The Enchanted Pomegranate”, an incandescent opera about a love story that unfolds in the garden of the muses. Four gifted singers were accompanied by a musical ensemble that included period instruments to bring the music of Monteverdi, Sances, Purcell, Handel and others to life with grace, virtuosity, and warmth. Il Cuore Canta (The Heart Sings) is an annual workshop and concert series arising out of the Libero Canto Szamosi approach to teaching singing, which allows classical singers greater freedom of expression, ease of vocal production, and depth of musical experience.

MUSIC FROM HIGH PEAKS PRESENTED BY THE CATSKILL HIGH PEAKS FESTIVAL
On a calm August evening, the Catskill High Peaks Festival blessed us with Music from High Peaks, featuring the festival’s renowned faculty and international rising young artists playing chamber music in Basilica’s North Hall.  A program of Close Encounters With Music, the Catskill High Peaks Festival is a teaching and performance summer festival in the Northern Catskills that combines a residency program for 50 hand-picked emerging artists from around the world with evenings of classical music concerts for the public. Filling the Basilica’s resonant space with an exuberant display of virtuosity and talent, the program featured chamber and orchestral music – a seemingly unusual departure for Basilica’s usual programming, but actually perfectly in line with our love of music and sound. They played works by Arvo Pärt, Villa-Lobos, Grieg, Bach Brandenburg Concerto, Dvorak, and Mozart, ending the night with an unusual cello choir playing Julius Klengel’s “Hymnus for 12 Cellos”. Positively stunning. 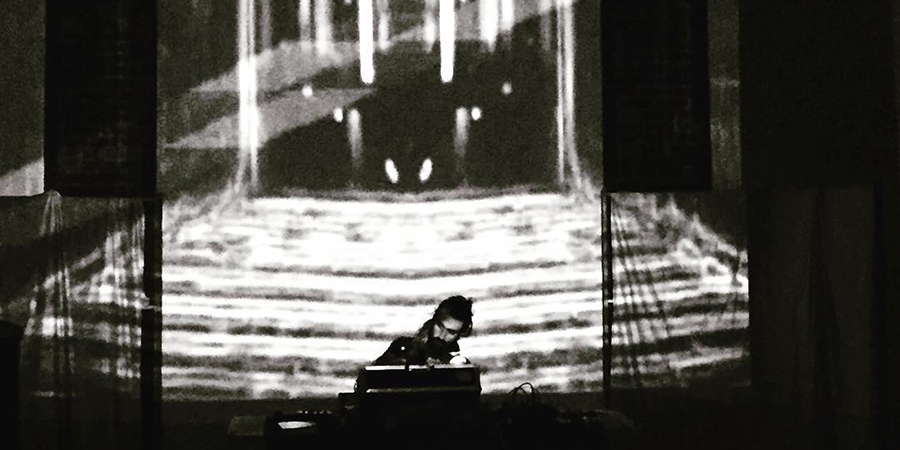 CELESTINE V: A NIGHT OF ASTRAL SOUND wrapped up our season this past Sunday, December 13 with a celebratory sonic embrace of darkness and light, commemorating an event 721 years ago when Saint Celestine V renounced his papacy, yearning to return to his solitary, archaic life deep within a cave. Celestine’s trajectory mirrors Basilica’s at this time of year, approaching winter’s greatest darkness, so we created a cosmic cave-like gathering to reflect. Performances featured locals SIS, C. Lavender, VEENGER CLUT and SVB, as well as special guest AHRKH, bringing his unique style of psychedelic drone.

Cosmically, the evening fell smack in the middle of two festivals of light, Hanukkah and St. Lucia Day – the latter of which was adopted from a pagan festival on the old winter solstice according to the Julian calendar. Marina Masic of Lucia Light supplied a very special “Light Bar” for the occasion — a stroboscopic, hypnogogic light experience that has to be experienced to be believed. And as if that weren’t enough, we were lit up by “the king of meteor showers”, brightly colored geminids streaking across the night sky!